DCU Superman Book Club Week 3: Look, Up In The Sky! It's Superboy! 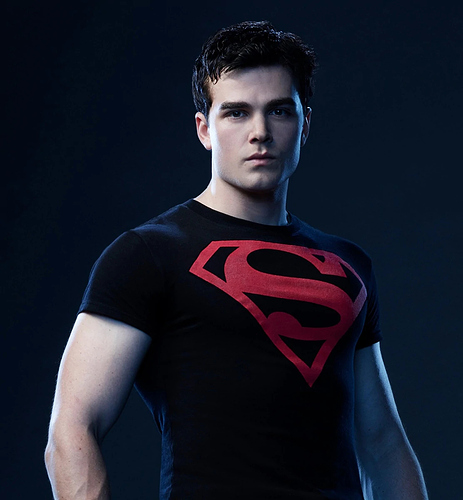 Yes, Superboy. A genetic grab bag from Superman and Lex Luthor, this aspiring hero seen in comics and TV gets the spotlight this week. Let’s take a look at what’s on tap!

Adventures Comics (2009-2011) #'s 1-7. After Infinite Crisis and the Final Crisis, Superboy is once again back in the DC Universe!

These are some choice reads folks, as they’re packed with ample amounts of: Adventure! Krypto! Romance! Blackest Night! A rampaging dinosaur! More Blackest Night! The Legion of Super Heroes in the Second Feature!

Sure, you’ve probably seen this one already, but likely not as an accompaniment to the above comics, so (as NBC said in the 90s): “It’s new to you!” Sort of.

There ya go Superfans, another week of action packed adventure as only the mighty Superman franchise can deliver! Toss on your jeans, your snappy black t-shirt, tell Krypto he’s a good boy and enjoy!

There’s free food out here in the open, kids.

, I couldn’t sleep so I’ve been reading Adventures Comics. Just finish issues 5. It seem like I’m reading about 2 different Superboy so far.

By the way, thanks for the food!

I started this a while ago, sort of at random. The cover of the first issue kind of grabbed me. I may add my $0.02. i got up to the blackest night tie ins and then either life or other comic books got in the way.

You know, I was enjoying these issues until this moment:

How dare you talk about my boy that way, you little clone?! Maybe I’ll just call you the “bad Superboy,” Conner! How would you like that, huh?

I’ve never been one to turn down free food.

Going through the first issue, it was interesting to see how it felt like a reset and a new direction at the same time. When Johns wrote him in TT, he was living with the Kents in Smallville and hated every second of it. Now that he’s a little older and wiser after coming back from the dead, he appreciates it more. But he still has the stuff that makes him uniquely Conner, still dealing with the nature of his birth and being a bit of a horndog.

Also, like I said in the PM, I relate to this girl. I mean, guy’s cute, BUT DAT DOG THO. 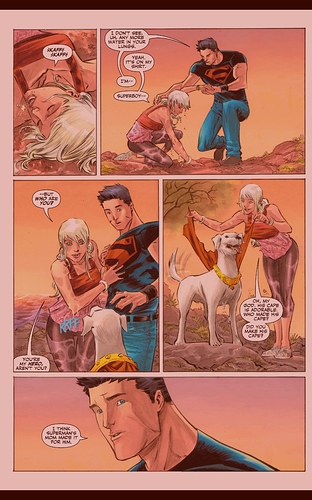 I’ve always liked the style and the stories and art of this particular Adventure Comics run, short as it was.

@Reaganfan78 Comics are always a fun endeavor to indulge in whilst one waits for the Sandman to appear.

Regarding the digital buffet/spread, you are most welcome.

@AntLeon The cover of Adventure Comics #1 is indeed an attention grabber.

When that book came out in print, I went to my then-regular comic store for my pulled books for the week and it was my favorite cover of that week.

As I perused the New Releases section, my eyes kept gravitating towards Adventure #1, so it was my first read when I got home, natch.

@AlexanderKnox If Conner is Bad Superboy, I guess he’ll have to share Krypto’s kitchen newspaper then.

I agree about these stories being a slightly different direction for Conner. He’s still the same guy, but definitely a little wiser too. It was nice to see him fully embrace the wholesome, homespun nature of the Kent farm this go-around, compared to the love/hate nature of his first time there.

@Don-El I find there’s just something really neat about this modern Adventure run. From issues 1-7 and beyond, it was a fun read, and one of my favorite books when it was published.

I may have to skim thru the selection to remind myself…

my first Conner Kent, or black shirt Superboy, is as seen in YJ. Of which, I like that he’s a clone without the memories of the donors (unlike in Titans).

I did like seeing the checklist at the end of the first issue. Its odd reappearance was its own adventure.

I was told to report here for comic book detention.

Would you like some DCU Detention cheese? It’s fresh, nummers and the kind Conner Kent would like too.

Whatever, man. I didn’t even do nothing. I’m just a troubled youth sure that reading these comics will in no way soften my hard attitude toward the world around me.

After reading issue 6 of Adventures Comic, I can’t help but hate Lex Luthor! What he did was Beyond evil!

I don’t want to spoil the story, after reading it you’ll know what I mean!

See, I know how to party (heck, @Applejack confirmed it in Office Hours), and run Detention, man.

Anyone for cold cuts?