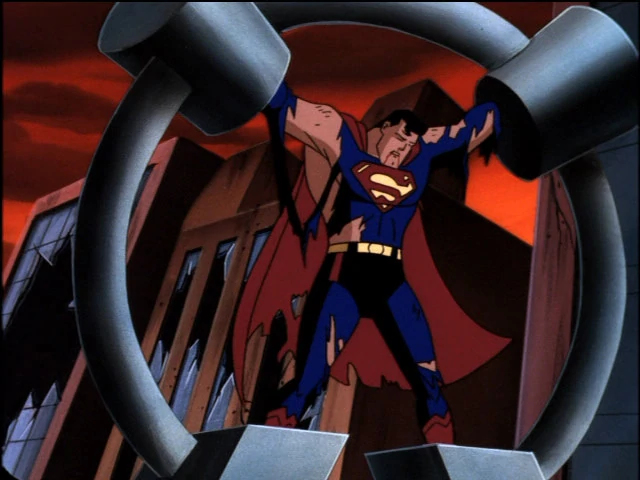 The skies run red, and the citizens of Earth howl in despair, for Superman has been defeated and a crisis is at hand. The great despot Darkseid has claimed victory over this planet and is lording his victory over the huddled masses in Metropolis, their great champion humbled before them, as blood runs down his chin while he stands shackled and unable to fight.

Lo! A human steps forth from the crowd and yells to the despotic ruler of Apokolips “In a pig’s eye! This is our world, and you’re not getting it without a fight!”

The stage is set for an epic showdown. Who will prevail in the coming crisis?

Happy Friday Superfans! It’s time for another whirlwind triumverate of action, adventure and thrills as only the mighty Man of Tomorrow, Superman, can deliver! As if the literary humdinger above wasn’t thrilling enough, here’s what’s on tap for this week:

Read (in the following order):

That’s the happs kidz. I can’t wait to read your thoughts!

Word of advice: You best buckle your selt belt Dorothy, because Metropolis is going bye-bye!

I got busy this week and couldn’t finish everything from week one, so I’m kind of glad this one is smaller in content LOL.

But oh my, we’re swinging for the fences in only Week 2.

But oh my, we’re swinging for the fences in only Week 2.

@Arrowversity Swinging for the fences now, while hoping to hit game winning Multiverse spanning Grand Slams in the weeks to follow.

Regarding Week 1, you’re welcome to continue commenting on that content whenever you like. I’m keeping my Book Club threads open, so as to allow for continued discussion on matters from weeks past for those who’d like to do so.

Sounds great @Vroom. I’m looking forward to reading those Crisis tie-ins. Funnily enough I watched those two episodes not to long ago. It’ll be a treat to watch them again.

I remember when I first watch Apokolips…now for the first time, I thought it was really good. A great tribute to Jack Kirby. I have to be honest, when Dan Turpin was killed, I was hoping that he would survives and was a slave on Apokolips and Supermanwould later rescue him.
But it never happened.

Not terrible books really, feelings on Superboy Prime based on what he will become aside. 86 would probably be more compelling if I as a reader didn’t know exactly how this is all going to play out.

@Arrowversity I chuckled at the “super-ventriliquism”. I just can’t imagine why that isn’t one of his highlighted powers, on the level of, say, heat vision or super strength. I bet Jeff Dunham would approve of that ability though.

My favorite issue from the DC Comics Presents batch was #86, as I always enjoy seeing Blackstarr. I also enjoyed the grandiose narration too, that’s always fun.

Thanks for chiming in on this week’s comics @Arrowversity. I’m eager to read your thoughts on “Apokolips…Now!”.

Bonus Discussion Question: In “Apokolips…Now!”, how many easter eggs featuring the names of noteworthy comic talents who worked alongside Jack Kirby did you find?

Over time, I’ve come across:

Frank Giacoia’s name also pops up, but I forget where ATM.

I haven’t watched the Animated Series episodes yet. I’ll get to them Tuesday on my day off. I just read these issues. For COIE tie ins they weren’t really connected to the story as a whole. I think my favorite of the bunch might have been the first issue with Supergirl. I wasn’t blown away by these books and I think the worst art was DC Comics Presents #88 with the Creeper. The story I liked least was a tie between Superboy Prime and Supergirl’s marriage. These weren’t very memorable to me. Superman does grieve briefly but he’s too busy to really since each book just pushes him into action so fast.

Did you know Stan Lee almost made a cameo during Turpin’s funeral but was remove before the episode aired? Here’s a picture. 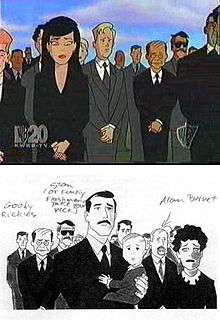 Too bad it never happened, that would’ve been cool.

@hotstufflouieb I think the comics were hit and miss, myself. Some were good tie-ins, some not.

“Apokolips…Now!” was the best Crisis tie-in, because while having nothing to do with COIE itself, those darn red skies were present and the Earth was literally confronted by a crisis (from Apokolips), so it fits the Crisis tie-in criteria/motif.

@Reaganfan78 I did not know that. I’m assuming he was there as yet another tip of the hat to Jack Kirby.

The plethora of Kirby references are yet another reason why “Apokolips…Now!” is the Best of the Best.

While it’s not Kirby-related, I think one of the more talked about easter eggs in Apokolips Now is when Maggie Sawyer is hospitalized, there is an unnamed woman sitting by her side the entire time. But in the credits, she’s named as Toby Raynes, who was Maggie Sawyer’s girlfriend during her time in Metropolis. This was apparently the closest they could do at the time to have lesbian characters in animation. We’ve definitely come a long way. 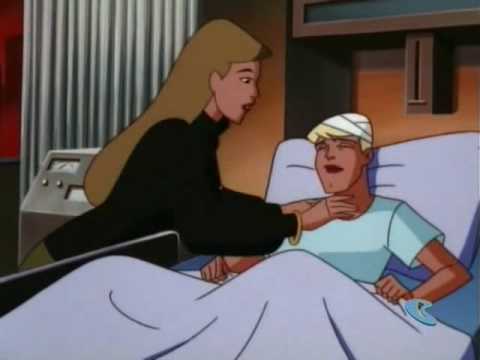 @Jay_Kay I noticed that too. It was a subtle way to add depth to Maggie’s background.

I believe they were also seen together at Dan’s funeral.

Of the Crisis on Infinite Earths tie-ins that constitue this week’s reading selection, what was your favorite, and how do you feel it related to the Crisis itself? Were they worthwhile tie-ins that added to the overall COIE experience, or cash grab tie-ins?

My favorite was DC Comics Presents (1978) #'s 86, but I’m biased. Blackstarr is the daughter of Supergirl’s ridiculously sweet Landlord. I recently read the Daring Adventures of Supergirl which includes the backstory of Blackstarr and her mother.

Also, this issue tied in exceptionally well because it even had the Batgirl/Supergirl discussion panels from COIE. It felt seamless to the COIE story.
I like this panel. It made me chuckle. “I’m Superman blast it!” 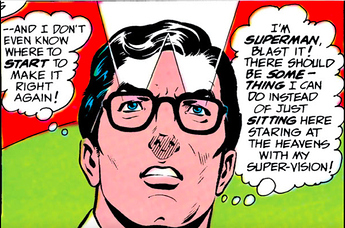 “Apokolips…Now!” is regarded as one of the absolute best episodes of Superman: The Animated Series and for damn good reason. Its praises can be heralded and sung high and wide, but what did YOU think of it? It’s okay if you teared up at the end, as I do that every single time I watch this one.

What was Superman’s greatest crisis, and what’s your favorite moment from that particular crisis?

where he had to bury you know who and take her to New Krypton. It was gut-wrenching to see. Poor Supes.

Great tie ins. Thanks for the fun pick Vroom!

It’s funny that they used “blast it” for Supes here, but over in the Wonder Woman issues for Crisis, she was throwing out “damn” every once in a while. Goes to show Diana is way more hardcore than Clark, I suppose.

@JLWWSM I too was pleased to see Batgirl in DCCP #86. Was this your first foray into Superman: The Animated Series?

Wonder Woman is a warrior though, so she can let those epithets fly and fly high!

Thanks for chiming in kids.

Was this your first foray into Superman: The Animated Series?

I vaguely remember watching a few episodes several years ago. It felt a little familiar, but I don’t remember anything from the series.

I’m enourmously biased, but STAS is the best Superman adaptation next to Donner’s movie, so I can’t sing its praises enough.

Are you going to stick with the series?