“A doomed planet. An orphan journeys through the stars. Raised by kind humans, he becomes a beacon of and for truth, justice and the American way. Believe a man can fly. Believe in…Superman.”

Greetings fans, and welcome back to the second week of the DC Universe Superman Book Club!

An alien vessel has crashed in Metropolis. Having stopped it in the nick of time, Superman is surprised to see a young boy inside. Is this a harmless child that is simply a vestige of a once powerful society or something more?

Last Son paved the way for other Modern Age Superman adventures that focused on our hero’s lineage and how it sometimes violently collided with Earth.

This point (among others) is also addressed in DC Daily’s discussion of this story, featuring Amy Dallen, Sam Humphries and drumroll please Krypton’s own shining star, Cameron Cuffe! It’s the 6/24 episode, so be sure to give it a watch to enhance your Last Son experience. It’s a doozy of a discussion.

This chapter of the Superman Book Club runs from today, June 28th until next Friday, July 5th. Spoilers are welcome as are any other points of discussion you may have for this tale.

There we go Superfans! Suit up, take flight and dive into Last Son! As a prominent character (and it may not be who you think it is) says at one point in our story: “Up, up and away.” 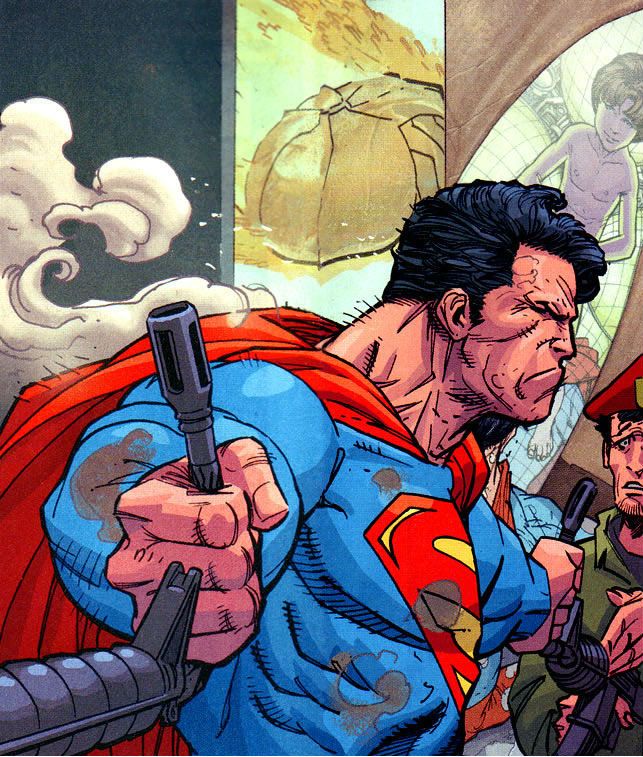 I’ll take one to go.

In between saving Europe with Easy Company and squinting, I’ll read them issues.

hands a To Go order to DE

@msgtv You’re a real Rock. You keep on fightin’ the good fight!

Normally like to read an issue or two and drop my opinion in, but ran through this arc in two days. Even in its quieter moments this story propels you forward. It definitely makes you want to read the next Johns/Donner collaboration. This story certainly is the off spring of Donners Superman films but too many years and developments have happened since Superman II to make this a version of that film. Besides, this Jor El is way more interesting than Brando’s long winded mutterings. Final thought for now, Kubert really likes to draw smashed up trucks.

@msgtv I agree that Last Son is more of a spiritual Donner Superman tale than anything that could fit in the movie continuity.

Johns and Donner’s Escape from Bizarro World is a fun read, especially if you like Eric Powell (creator of The Goon, from Dark Horse).

What’d you think of Christopher Kent?

I like Chris, but I did remember right away who he really was. Great ending for him, showing that he’s learned to be the hero.

Read 847 this morning and it deserves its own separate post. Dwayne Mcduffie is a first ballot Superhero Hall of Famer. Just this tiny slice of his work demonstrates he understands the characters, what motivates them, and how to convey that to us. This one shot story has it all, Ma and Pa acting believably, showing emotion, Superman in his full heroic mode, his willingness to risk everything for complete strangers. It is stories like this that make Superman my favorite character.

@msgtv Agreed. I’ve never read a DC book by McDuffie that I didn’t highly enjoy. The man was a wonderful talent.

@Vroom, great choice for a read. This was a very heartfelt story which to me really captured his humanity with his desire to have a child of his own and how “Even though he may look like one of them he is not” Very Donner. A very darker and morbid take on the Phantom Zone than is some other comics which dabble in to it. It is interesting to think that this could have been a story or at least part of one for a third Superman movie. I wonder if there is an interview some where with Donner talking about what he had planned for a third movie or if he even had intended to make a third movie and if this was part of it. It would fit in with the other two nicely I feel and I do believe that this would have made a good movie.
I will say that I was a little hard for me to adjust to Kubert’s art. Not that it was bad I just prefer a cleaner style, is all. Having said that I do love Tim Sale’s work but again it took some adjustment on the eyes for me. I wish it had all been drawn by Renato Guedes thats more my style. I feel that issue ties in nice with the overall story as well. Dwayne McDuffie was truly one of the greats. I am so grateful for his contributions especially in the world of animation.
Vroom do we ever find out what happened to Christopher? Great name for a child of Superman I’ve always thought.

I’ve never seen the Donner cut for S II. Wish they would put it here

@msgtv oh gosh its much better also there are some little things in the first one that aren’t in the theatrical release like Lois seeing Clark run next to a train when she is a kid and her parents are played by the Clark and Lois from the Old serial before Reeves run in the 50’s.

@Aquamon Christopher does pop up in later stories. I’m 99.99% sure of what they are, but I don’t want to cite them without being 100% sure.

Also, Donner has talked about what his third movie would’ve been.

From what I’ve read, it seems like Brainiac would have been the heavy while Supergirl would have made her debut too.

This may be why the Salkinds were eventually intent on a Supergirl movie, and why they ended up taking it to Tri-Star Pictures after WB evidently passed on it.

Oh cool well we have gotten stories similar to that so not to hard to imagine what it would have been like.

“Last Son is the first of two stories in Action Comics written by Johns and Donner, with the other being Escape From Bizarro World (#'s 855-857 for those curious). What’s your assessment of this particular story? Did it make you want to check out their subsequent work on the book?”

Overall I thought it was a really strong story, it works both as a big widescreen superhero slug-fest, and as an emotional drama about a Clark and Lois’ brief glimpse at family life before it’s roughly taken away. The art by Andy Kubert delivers on both very well.

as for reading the other arc…I’m not super interested in it, mostly because of Eric Powell. He’s a strong artist, but he’s kind of a bland creator (I mean, the Goon is basicalaly a rockabilly Hellboy with try too hard “edgy” jokes that even Family Guy would throw away) and I personally couldn’t continue to support him in any way after the video he made that was an elaborate sketch that compared working in superhero comics to being raped.

“Given Richard Donner’s involvement, can this story be seen as the Superman movie of his that never was?”

Not really – I honestly wonder just how much Donner was involved, because I saw far more of Geoff Johns in this book than Donner. Literally the only time I really felt Donner’s hand was an early part where Superman told a kid he should keep drinking orange juice. If anything, this feels more like a modern remake of Superman 2 than a continuation of those old Superman movies.

“Action #847 is a companion issue to Last Son, an intermezzo if you will, written by the legendary Dwayne McDuffie. How do you feel this fits into the overall hierarchy of Last Son?”

It fits in in terms of “oh crap this book is super late and we need something to throw out to the masses NOW.” I mean, it’s a good one-shot, and it does a decent job of tying in and showing an aspect of the book we wouldn’t have known otherwise, but ultimately, it is mostly filler to try to cover for the fact that the story took a long time to finish.

@Jay_Kay I wasn’t aware of Eric Powell’s video. That’s an incredibly insulting comparison for him to make.

Anyway, you’re right about #847 and it being filler to keep Action on time.

I remember Last Son having fairly lengthy delays when it came out, which also explains why it was concluded in an Annual to free up the regular book to stay on schedule.

As always, thanks for your thoughts.

The thing is that other creators, like Robert Kirkman and Warren Ellis, were able to make the point in the past that comic companies focus too much on superhero books and that comics are capable of doing so much more, but Powell’s video was the equivalent of drunkenly coming to the debate, showing his entire ass on stage and projectile vomiting on the audience.

I read this one from a collected edition a while back. To tell the truth I just skimmed over it for this book club to remind myself of the story.
I like how the story stretches from the very personal (Lois & Clark, kids, etc) to the very epic (alien slugfest in Metropolis), to the surreal (the phantom zone scenes). There was one instance, where we went from Lois & Clark hugging in Zod’s fortress to the entire Justice League roaming the skies after Clark freed them…all within a span of a page or two…personal moment, meet epic moment

. Great read, and yes I would have checked out their other collaborations, had I known they existed before this book club!

Do I think this the Superman movie that could have been? Sure, I think that way about half the Superman comics I read. As far as Donner’s involvement, had I not known of it, I would have thought the story was obviously influenced by some elements in his movies (the crystals, Jor-El’s hologram, “you are not one of them”). I do not however see any direct correlation. They’re obviously separate stories, at least to me.

The art by Adam Kubert is amazing. Almost feels like a hybrid between realistic and cartoonish, with impeccable attention to detail. I remember the fight scenes in particular being a blast to pour over time & again. like the S on the belt. Was it just an artistic choice here?

Finally, I just want to point out this spread in particular…the banter between Lex and Superman…Superman’s expression changing from panel to panel…just priceless 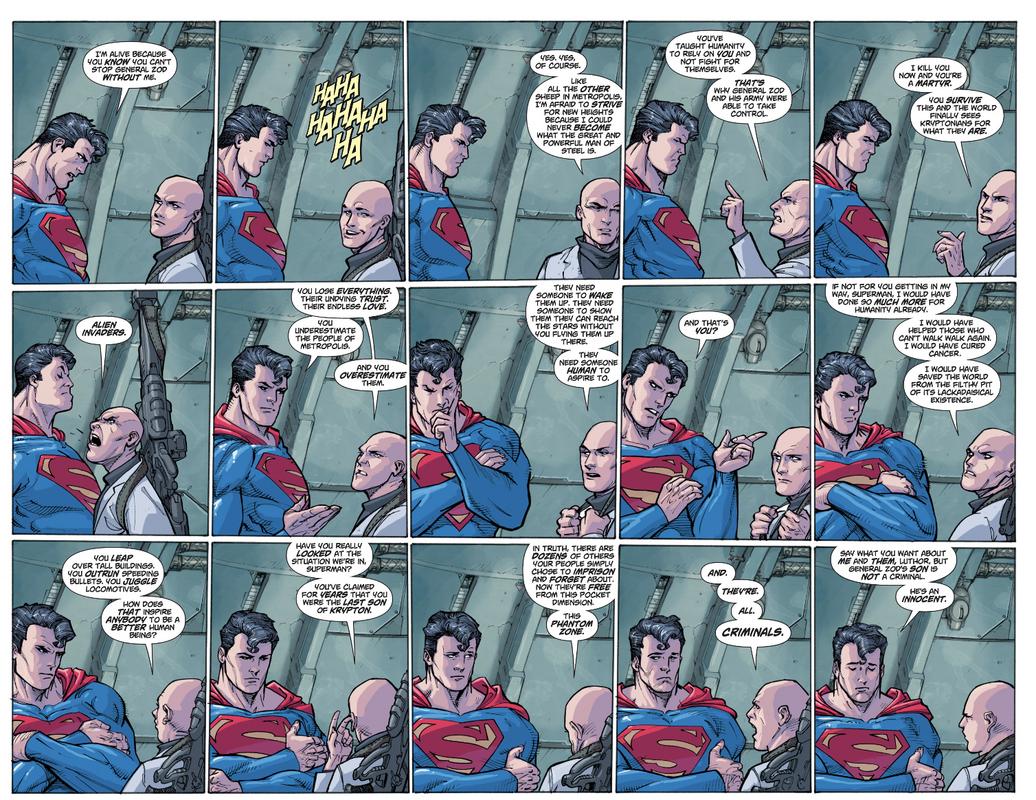 @Jay_Kay Ellis and Kirkman have tactfully made their thoughts on the matter known and they’re the model to use when someone feels the way they have.

I’ve always felt that ANY story imaginable can be told within the superhero genre. Anything at all, there is absolutely no limit whatsoever. Literally every single genre of storytelling known to the human mind can fit in the superhero mold. It’s one of many reasons why I’m so consistently entertained by the field.

When creators harp on superhero comics (especially those who’ve made a decent living from them), I think “You do know any kind of story fits within the tropes of superheroes, right? As a writer, you may want to recognize that, expand your creative field of vision and not bite the hand that puts food on the table.”

They’re certainly entitled to their opinions, but to say that superhero comics are creatively limiting is befuddling to me in some ways, especially since I myself am a writer (not of comics or other fiction though).

Anyway, thanks again for your comments =)