This week, the adventure shifts between the present and the past courtesy of the Superman content from 2011’s DC Retroactive event. “What’s DC Retroactive?” you ask? Read on to find out, dear reader!

DC Retroactive launched in July 2011 and was focused on pairing new tales by classic creators that starred Batman, The Flash, Green Lantern, the Justice League, Superman and Wonder Woman with classic stories from the 1970’s, '80’s and '90’s, often by the same creators.

As a new DC Universe would debut at the end of August 2011 via the conclusion of Flashpoint and the debut of The New 52, DC Retroactive served as a great highlight of what was and what had come before.

Read (while wearing your nostalgia blinders if you like):

As for tie-in video content, this week is Viewer’s Choice! Want to watch Super Friends as you read the 70’s Retroactive adventures of Superman? Go for it! Check out Ruby Spears Superman (where available) as you indulge in the totally tubular 80’s tales of The Man of Tomorrow, while shredding a gnarly episode of Superman: The Animated Series as you kick it in the '90’s with Sunny D (boo to Purple Stuff!) and The Man of Steel!

There you are, present aficionados of the past. The books are in play, retro is in and nostalgia sells. Have fun! 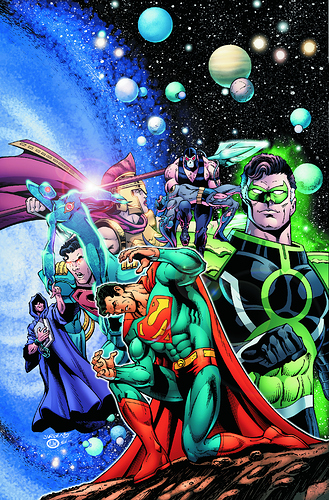 I remember these! I own the Wonder Woman issues I am pretty sure. I am all in for this one.

Had completely forgotten about this event. I think I had picked up an odd issue or two. Could have used the download all button cuz all 18 are on my read list now.

@Don-El Boggle is a fun game. If there were a DCU Game Night, we could play it whilst talking Superman.

@PrincessAmethyst Welcome! The Retroactive WW books are fun. I hope you enjoy the Superman issues.

Out of the three new stories, the only one I really liked was the 90s-esque story with Bald Superman. The reverse is true of the classic issues bundled with them: the only one I didn’t like was the 90s issue. My favorite story overall is the classic Earth 2 Superman tale, while the 1970s homage story was completely unremarkable. The 1980s Wolfman story was okay if a bit derivative of Maggin’s “Must There Be a Superman” story, but Wolfman’s prelude to COIE was a throwaway story.

I’ve previously read the Wonder Woman and Flash issues because they were on sale and I thought “what the heck, why not?” Most of them were kind of “eh,” but there was done good stuff still in there. Looking forward to seeing how these issues fare!

@AlexanderKnox I agree that the 70’s homage story left something to be desired. It’s my least favorite of the bunch.

@Don-El Thanks! Upon reading your post I was reminded on the Speed Racer theme, which is now racing (pun intended) through the speedway of my mind.

Sorry Vroom buddy, for some reason the Calendar notice ad still isn’t blazing!!! I tried to prime the pump, we’ll see I guess…

I suspect all hands are not on deck currently due to the big deal in NYC this week!

Really excited about reading the rest of this series over the next few weeks. The format is a great idea, the new stories take on much more significance paired with their inspiration. And the originals get new life in the bargain.
Best new, 90s with Simonson and Bogdanove
Best original, surprise pick 70s with Bates and Swan

The 90s was just a strong story, interesting “menace” and the completely entertaining nuts and dying Lex. I actually think Bogdanove’s art is even better than it was before.

The 70s managed to take the normally horrible Superman and Lois get married trope and make it interesting and without the normal this was a dream, trick whatever. And the Clark forgetting he’s Superman but still being a hero worked well.

Goofiest character, 80s loopy Lana what’s up with that?

Most outdated idea, Clark as a TV anchor. Even as a kid I always wondered about getting back in time to do a broadcast when you’re punching bad guys. Also, Lois referring to herself as a “news hen”

So due to the fact that it was leaving tomorrow on here, I decided to do the Viewer’s Choice first, and I went with the 1984 Supergirl movie.

Why? Here’s the thing – when I was a kid growing up, I tried watching the Christopher Reeves Superman movies, but for some reason I could just never get into them. By the time we get him as a teen in Smallville, I was usually falling asleep or just losing interest. I did eventually see the first two, but that was more when I was a teenager.

But Supergirl? I had the tape for that and while it wasn’t in as heavy rotation as, say, the Batman movies or Who Framed Roger Rabbit, it was a regular watch. So with it being on DC Universe, I’ve been curious to give it a watch and see it as an adult.

Watching it now, I think I can kind of get why I would be more into this when I was a kid – and it wasn’t just because of the gorgeous blond in the miniskirt. I think a big part of it is that this movie doesn’t make you wait – Kara goes from making statue butterflies fly in Argo City to flying around as Supergirl in, like, 10, 20 minutes at most. The production design was also really solid, I really liked their approach to Argo City and some of the crazier designs and situations felt straight out of the comics, for better and for worse, at times. It was also pretty cool to see what it was like inside the Phantom Zone.

Of course, there are flaws – the whole thing with Selena and the magic is never really explained, and the “love story” with Gardener Boy who’s name I don’t even remember was really ham-fisted and unnecessary.

Still, I honestly enjoyed this. It’s camp, but enjoyable one. It’s a shame that the movie didn’t pick up, or that we never got to see Slater interact with Christopher Reeves’ Superman. 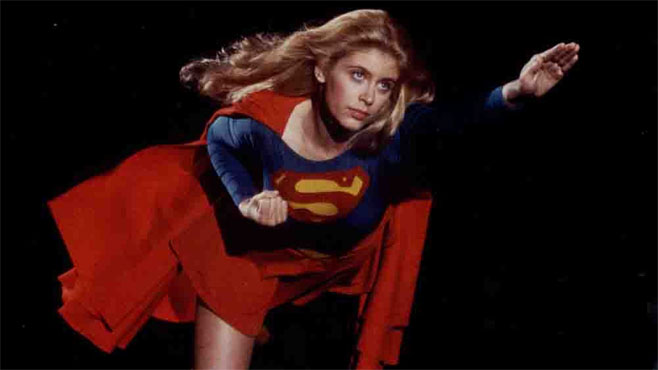 @msgtv The 90’s book was my second favorite, with the 80’s issue being my favorite. I agree about the “news hen” label.

@Jay_Kay Supergirl…an inspired Viewer’s Choice pick, nicely done. For all its faults, I think Supergirl is still quite fun. Plus, it has Peter freakin’ O’Toole, one of the greatest movie actors ever. Yes, it’s not his best performance, but I’m just happy to say we live in a reality where Peter O’Toole co-starred in a DC flick.

Also, Supergirl is now on Netflix and in HD. It was remastered for its Blu-ray and Digital releases a year or so ago, and it looks fantastic!

Supergirl the movie is a mess with all kinds of odd choices, and just goofy logic. Oh, and Helen Slater is Supergirl, Faye Dunaway eats up every scene she’s in, and even at its worst the movie is charming.

I prefer the Supergirl movie over most of the Superman movies (with the exception of the first two Reeve films). It makes no sense, sure, but it’s fun.

Exactly, it makes no sense but it’s fun. They should put that on the DVD cover

Speaking of the Supergirl movie, the guy that Supergirl saves outside of the Popeye’s was played by Hart Bochner, who would go on to voice Arthur Reeves in Batman: Mask of the Phantasm.

Bochner’s character in Die-Hard got his brains blown out by Hans Gruber, but in Supergirl…he was a-okay!

Also, has anyone wanted an A&W Root Beer any time you’ve seen Supergirl? I don’t know…maybe it’s Matt Frewer’s t-shirt or other points of product placement throughout the movie, but I wanted a crisp, cool, refreshing, beachwood aged, bubbly A&W Root Beer while I watched the flick this morning.