Happy Friday Superfans! Once more unto the breach do we go into a brand new week of Superman flavored action and adventure, this time co-starring Diana of Themyscira, aka Diana Prince, better known to the world at large as…Wonder Woman (go ahead, you can sing her TV show theme to yourself, we all do it)!

What’s on tap for this week of Super Wonder:

If you do have RS Superman, then you likely know what a fun episode this is. In addition to it being the only episode of the series to feature a DC hero alongside Superman, it was also co-written by the legendary Marv Wolfman!

If you had this opportunity, what would you like to do with Diana as you observe a day in her life?

That’s it for this week. Buckle up for some fun comics and (if you so choose) a very fun episode of a highly underrated TV series. 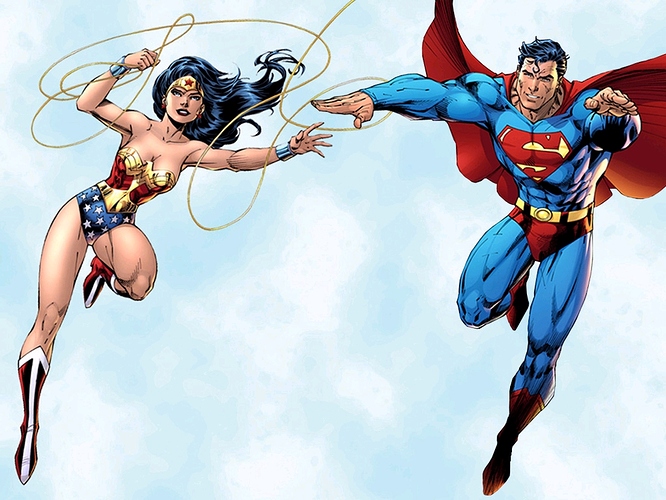 SM and WW oh I shall not miss this one Good Sir!

@Aquamon Bully, good sah! I look forward to your thoughts, oh purveyor of things aquatic, oceanic and the like.

@msgtv Awesome, always glad to have ya!

I’ll get this on the calendar either tonight or sometime early tomorrow. Congratulations!!!

puts on Bossa nova tunes, throws on beach shorts and mixes a shaken, not stirred martini

Imagine my excitement and immediate disappointment when I saw that a Ruby Spears Superman episode was included in this week’s viewing. I was like, “They’ve finally added my favorite animated Superman TV series? YES! Oh…wait…”

My favorite issue of the bunch is DCCP #76. It creatively plays off of Diana’s origin story and offers a one-off villain who perhaps is due for a revamp. It also left me itching for some Wonder Woman vs. Clayface stories, which DCU is able to provide–

I liked the attached scene from DC Comics Presents (1978-1986) #76. Supes is absolutely not having a world without Wonder Woman! “What sort of person are you!”

Thanks for the SuperWonder goodness @Vroom! 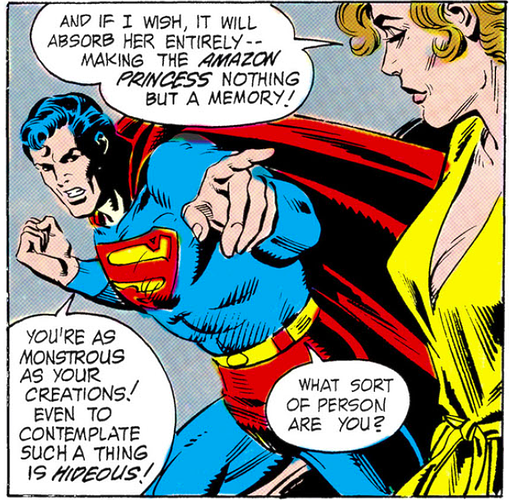 @JL I’d get ice cream with Diana too. I bet she’d Iike Baskin Robbins’ bubblegum flavor (I assume they still make that).

A training session with her would be fun, and exhaustive as well I imagine. Who am I to complain? I could use the workout.

@AK The day that Ruby Spears Superman is added to DCU will be a day long remembered. It’s a great show.

The calendar notice hath been submitted to the local authorities for posting. May I now sample some of the wares here?

@Don-El Indeed good sir, indeed. The Superman Book Club commonwealth thanks you for your aide and advises you to sample the freshly delivered pie.

puts out a pie buffet along with assorted beverages

Read the DC Presents, the first was published in 78, but other than the JLA satellite it feels like it was from 58. The art, story and dialogue all would have been dated even at that time. But, still fun to be had. The best is the Man of Steel and the Maid of Might using all their powers to not jump each other’s bones. Until Superman literally bursts out of the satellite in frustration. Best line of the book is from the narrator as Wonder Woman lands in DC.
“The Much maligned and often misunderstood Pentagon” Way to fight back against commie propaganda DC!

The second is a better read, with Superman and Wonder Woman each holding their own against mud monsters. Always like the monitor showing up, although he needs more memory in his monitor ship since he has to decide which observations to “permanently save” Best line is by Superman “I’ve heard enough!” Gee I hope so Supes Dr. Cade, the woman scientist as he called her, has been droning on for pages. On to more books!

@msgtv I’ve found that mud monsters usually spice up the proceedings of most superhero affairs, and it seems DC Comics Presents agreed.

Thanks for the pop-in, eager to hear your thoughts on the other books

Had to pop back after the Action issue. That over the top 90s cover didn’t ring a bell, but as soon as I started I knew this story. My last dropout from regularly reading comics ended around this time. It is stories like this that reminded me why read them. The humorous beginning and end frame a beautiful exploration of Clark’s love for Lois through the lens of his friendship with Diana. That’s smart writing.