Happy Friday Superfans! This week, we’re taking part in Superman’s adventures alongside the greatest hero the world has never known and that you’ve never heard of (so said DC Comics from 2007-2011 at least) Booster Gold!

Grab your Legion flight ring, call in sick to your job as a museum security guard and check out the following while not kneeling before Zod:

Go squeak your wheel (you’ll get it when you see it) and enjoy SuperBoosters! 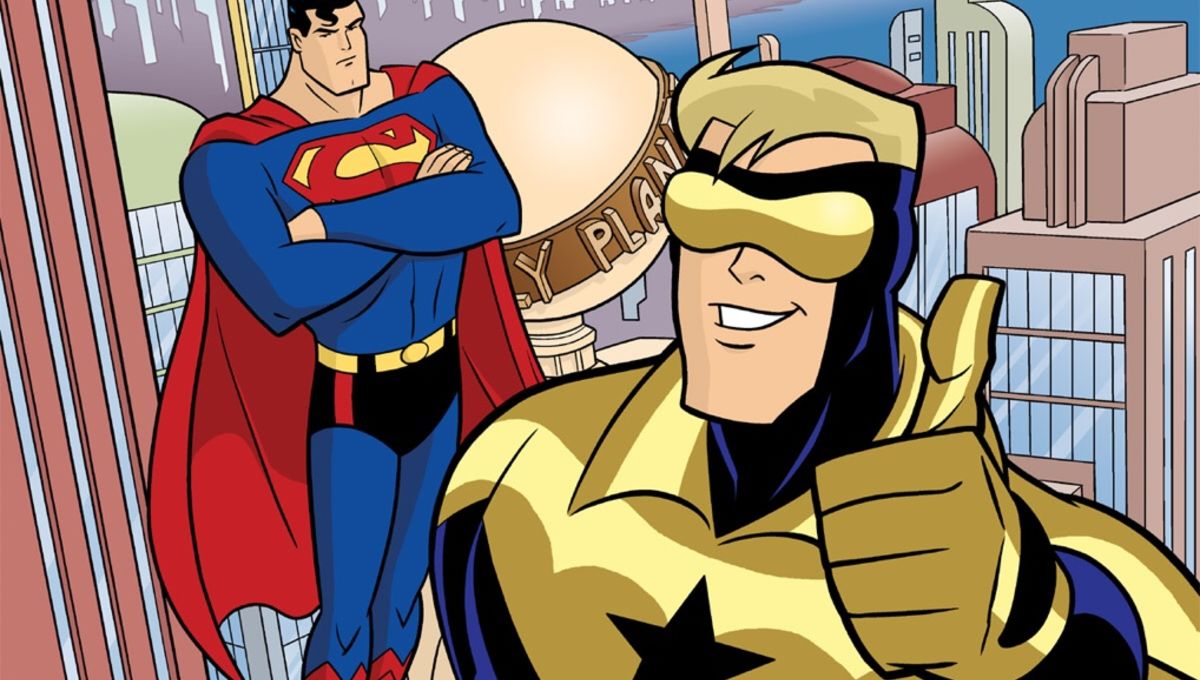 After that Booster Shot, you’ll feel compelled to say “Energize!”

Eager to read this set and watch the videoooooos, now that I’m done runnin!

@Don-El Make sure you’ve got your Legion ring on. Booster would be impressed.

Also, make you’ve got it on for next Wednesday too

“Why not two?” says Booster Gold.

Be glad I’m buying one Michael. Ah heck, make it two. I loves me BG. He’s a Supernova!

Skeets turns on Booster in BG #7. Carter might want to make sure that Mister Mind hasn’t slinked in there.

Fun Fact: Mister Mind is the pilot of Skeets for one of Mattel’s Booster Gold action figures.

Finished the first trilogy. Not, bad. Like how Superman lets Booster blow off steam and Booster actually thinks he’s kicking Superman’s butt. The middle third written and drawn by Byrne is really weird at points. That conversation between Batman and Superman is just not good.
Batman: As a mere mortal I call upon your help Superman
Superman: I know nothing of paper and ink and science things, help me o great detective
Robin: duh

Hey Vroom, will try and finish this one but might not get to all of them.

? there was a thread some where talking about STAS listing best eps. The late Mr. Kent is my personal favorite. I know its not the typical Sup’s story but thats what I like about it. Don’t get me wrong I love reading or seeing Sup’s flying around and beating up bad guys but I feel there isn’t enough stories in the Noir style. I hate how just because Big Blue is labeled the “boy scout” that makes him naive and gullible. I know Bat’s is the worlds greatest detective but Sup’s has the knowledge of a superior alien planet and tech. He can think faster than anyone next to the flash and in the golden age they use to give him more credit for his detective/reporting skills to solve a crime.

Do you know of good modern story arc that depicts these traits and/or ones that could go with the “The late Mr. Kent” eps. for a book club possibly?
(I may be exaggerating on the lack of respect he is given for these traits but it is definitely there in quite a few stories.Mostly team ups it seems.)

@Aquamon There’s no rush friend. Do what you can when you can.

I’ll have to think over your inquiry. Are you only looking for a digitally available story or if something that’s print only comes to mind, is that okay too?

If its on the app that would be great but I still buy physical prints every month so anything you can find I would appreciate it Thanks man!

@Aquamon Okeydoke. I’ll cull the DCU library for what I can find and do my best to deliver on your request.

Thanks man. Don’t feel like you have to look to hard or nothing. You know more Sup stories than I do so I thought I would ask and your recommendations have all been good thus far. I’ll stop throwing butter at you now LOL.

@Aquamon One comic story that tangentially (at best) relates to “The Late Mr. Kent” is “The Death of Clark Kent”.

It’s a Triangle Era story, but has no noir trappings that I recall.

Would you want to check that out or are you more set on something decidedly noir with a mystery as it’s focus?

Wasn’t going to read the second story here just because I read it when it came out not that long ago, but then I saw the covers. Man, that’s a good story. Burned through it last night and today, it’s even better as a collection. There’s not a single thing I don’t love about his story. Booster gets to show that he’s a hero, there’s humor, Zod shows up, Superman punches stuff, and Lois kicks butt. Art team in books were great.

Just read the first three of these from the mid 80s, and I do miss the original rascally Booster Gold for sure. The John Byrne version of Superman was a ok too back then, art and all. Now we have the slightly nutso time traveler version…bring back the original crispy crook I say!

Concerning Superman, I prefer the unmarried 80s version or New 52 version to the current, but I can dig into either or.