Happy Friday Superfans, and welcome back for a new week of Superman themed action and adventure!

This week, the Man of Steel shares the spotlight with the badass swift and powerful monarch of the oceans aka Mr. Boffo Box Office Biz himself, Aquaman!

Do you side with Superman in why he rescued Lex, or would you have left Mr. Luthor to rot down in The Abyss?

That’s it for this week. Grab a box of fish flavored deep fried goodness from Long John Silver’s and settle in for some Kryptonian and Atlantean based fun! 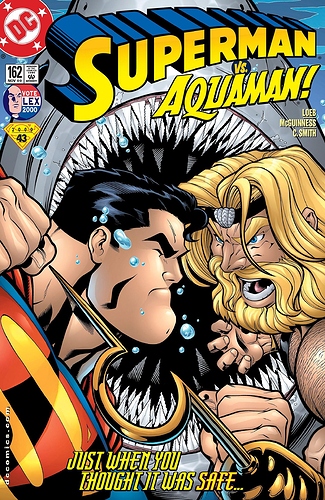 Very cool
. But, did make me notice that there’s gaps in Superman 86 between 177 and 204. Hope that’s on this list to get digitized.

@Aquamon See, I told you you’d like my pick for this week

@msgtv I really hope DC proper does fill in that gap of Superman, as well as finish up the digitizing of Adventures of Superman v1 and Superman: The Man of Steel.

The number of issues needed for each series to be complete in digital really isn’t that many, compared to Action Comics v1 or other long running non-Superman books.

The only Post-Crisis/Triangle Era Superman ongoing that is completely available in digital is Superman: The Man of Tomorrow.

A few of the DC Comics Presents: Superman 100 Page Spectacular books feature issues of Superman v2 that aren’t available on their own in digital. Those are in our library.

This is the one I’ll plan to post to the Calendar if it’s not there when I get home Monday night, Lord willing of course.

@DE If you see Superman fly past your ride, snap a photo. Tell him he has a Book Club all his own on DCU too

Good little story. I support Sup’s decision. Saving people is what he does and it’s one of the reasons we love him. I like to think I did a good job as King in STAS. I’m the King of the the most powerful nation, covering 71% of this planet and all others will abide by my rule. But I am also a just ruler and know when to heed the advice of those who are deemed noble and advocate caution in the presence of power and pursuit for peace.
Was unaware my look was thought of as grunge

I was going for a seafaring Greek God look with some surfer biker vibes. I prefer this look to the high and tight military look.

@Aquamon As king, you could have just booted Lex into the jaws of a ravenous Great White or ten.

Then when Superman shows up, you just shrug and say “I don’t know where he went. Now, you’ll excuse me, I have a kingdom to rule.” Superman takes off, then you pick up your trident and, while on the throne, say “I am truly king.” as you survey your powerful kingdom before you.

As for the grunge remark, blame Nicolas Cage

I can’t blame Cage for anything he was one of my favorite actors when I was a kid and even with that slew of bad ones he did for awhile he was still the man just bad stories.

@Aquamon Surely you’ve seen The Rock with mssrs Cage and Connery. One of Cage’s best movies, and heck, it’s one of Sean Connery’s best as well.

LOVED THE ROCK!! ran around the house as a kid saying Freeze FBI! and anytime the word rock is used in a conversation I always want to say it with a Scottish accent.

You know what John Mason says about winners…

I do but wont say it here LOL

Is that a dollar store shrimp roll?

@msgtv I’m not feeling to good. I think it may have been. No surprise though, one time I was sick and he gave me cheap out of date soup.
Souperman!

"During Superman #'s 162 and 163, Lex Luthor is running for the office of President of the United States. Aquaman takes Lex into custody, which then puts Superman in the unenviable position of having to rescue his greatest foe from the King of the Seven Seas.

Do you side with Superman in why he rescued Lex, or would you have left Mr. Luthor to rot down in The Abyss?"

I would be with Aquaman in terms of getting Luthor to stand trial for his crimes against Atlantis if he actually did some diplomacy instead of some down-right Prince Namor crap in trying to drown Metropolis. If anything, Aquaman would be standing trial for this crap, if it weren’t for the fact that this feel so out of character and an awful rendition of Aquaman that I think we’re all better off just forgetting it ever happened.

“What do you think of the DCAU Aquaman’s debut in this episode of STAS?”

Overall a solid first appearance – it tells you who Aquaman is, what his powers are, and what makes him compelling in that he’s as much a sovereign ruler as he is a superhero. The only questionable decision I saw was the weird sort of sexual tension he had with Lois Lane. Uh…why did they do that? That’s weird. Stop that.

“In this week’s schtuff, which look of Aquaman’s do you prefer? The classic orange and green togs from STAS or the long haired, hook hand 1990’s and into the early 2000’s ensemble (Stanley Godspeed would later inform John Mason that this look was a “grunge thing”) ?”

They’re both okay enough, I suppose, but honestly in terms of looks, I overall like the current/movie take on his look and costume, which I think is a great mix of both. 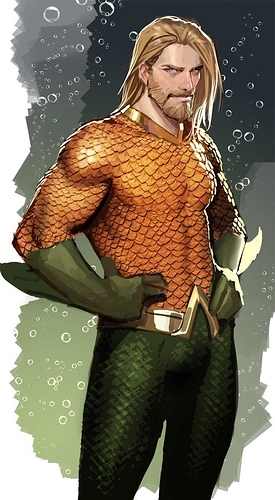 Under ‘better late than never’…I have posted this to the Calendar.

Also, we continue to archive these on the DCU Book Club Discord site, in case the King ever returns…