Faster than a streak of lightning!

More powerful than the pounding surf!

Mightier than a roaring hurricane!

This amazing stranger from the planet Krypton, the Man of Steel gong smash SUPERMAN!

Welcome one and all to the premiere “issue” of the DC Universe Superman Book Club!

Whether you know Superman better than your Aunt Ida or know nothing about him but are chomping at the bit like Bibbo Bibbowski at a free buffet to know all you can about the Man of Tomorrow, this Book Club is your one stop Fortress of Solitude shop for all things pertaining to Krypton’s last kiddo.

The adventure begins with 1986’s The Man of Steel mini-series written and illustrated by the legendary John Byrne.

This six issue mini-series began the Superman reboot of the 1980’s, which was also the very first time the Superman mythos would be reconstituted for the modern era.

If this is your first time reading this title, what’d you think of it? Did it dot all of the i’s and cross the t’s that needed to be when telling the origin of Earth’s greatest hero?

Please feel free to bring forth any other topics you’d like to discuss about The Man of Steel as well. This discussion runs for one week, until next Friday June 28th.

Throw on your uniform, hike up your boots and don that cape, its time to go up, up and away with Superman! 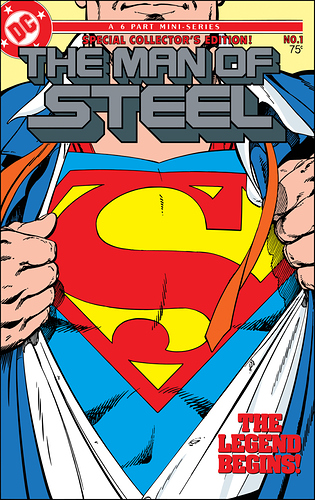 The day has finally come!!!

Now this my friends is a supersize book club! Thanks Vroom!!

WhooHoo!
I love Supes and can’t wait to dig into this one!

Yes, that’s a real thing and it is delicious. Have a scoop or five!

Sounds fun, I’ll give this a read

Oh, and this is a [World of Superman] club production!!!

A: I’m part of Generation X, so for me, and many others of my gen, this origin tale is paramount. Many of the Silver Aged purists despised the way Byrne “de-powered” him, but what was hard for them to understand is that it needed to be done. Had this reboot not happened the way it had, Superman could’ve easily fallen far into obscurity and that could’ve killed the character. Anyway that’s the long way of saying that MoS was totally necessary!

A: PERFECT! Sure John (and Marv Wolfman), took a page out of the Kingpin book of villainy for Lex, but it made so much sense and works so damn well. To this day, MoS’ version of Luthor is the main influence for how the character is approached. As for Bizzaro… Brilliant take! Absolutely brilliant. The old version was great for its day and a lot of fun, but the MoS version of Bizzaro actually made you feel and think deeper about the character. A clone gone wrong is such the right creative move and I think I’m putting it lightly.

This was the first time the Superman-Batman dynamic was ever drastically changed. Instead BFF’s 4 Life 4 Eva, they started out as heated adversaries, who despised eachother and each others tactics. Of course later on their friendship would develop and they would become “BFF.” But the fact that they began the way they did in MoS made the eventual friendship much stronger, much more compelling, much more relatable and frankly much easier to believe.

Magpie…she’s kooky but so fun.

I haven’t read this one before, but I have read some of Byrne’s other issues within his run and…wasn’t really a fan. Should be interesting to see some of what is considered his prime material!

@Jay_Kay Maybe reading TMOS will lead to a new appreciation for the Byrne stuff you have read?

Look forward to your thoughts.

@Jay_Kay if you’re a Superman fan, I believe its essential.

Great stuff @Vroom! Excited to see you get this off the ground! Up up and away!

I may actually take a break from my current ongoings to join this convo…probably later next week. Thanks @Vroom!

John Byrne’s Man of Steel was the origin that I grew up reading, and marks the beginning of my core collection.

I just need to get caught up on this digital reading, so I’ll be back on Monday.

@DCCC, great response don’t think I will have too much more to add to that buddy.

@Aquamon John Byrne’s Superman is what first comes to my mind when I think of the comic book version of Superman too.

My first Superman comics were issues 19-21 of Byrne’s run on Superman volume two. I was 7 at the time I got those, so they’ve definitely left a lasting impression.

I’m glad folks are enjoying this selection. I’m eager to read what more of you think as you finish the series.

I’m halfway through the first issue and I just wanted to pop in to say I hear the MOS soundtrack in my head as I read it (specifically the song, “Goodbye My Son”).

She convinced him to keep Clark in one car ride. That must’ve been one fantastic conversation. Go Martha! 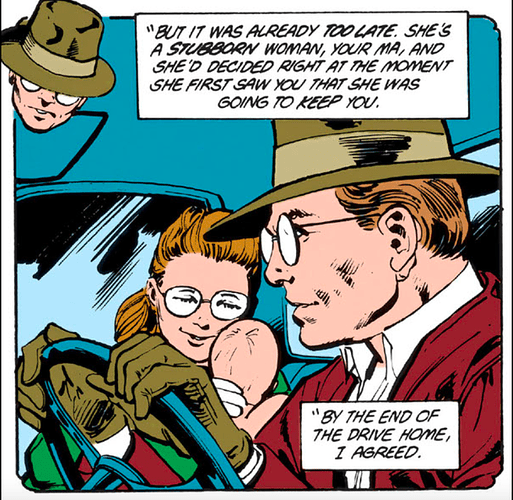