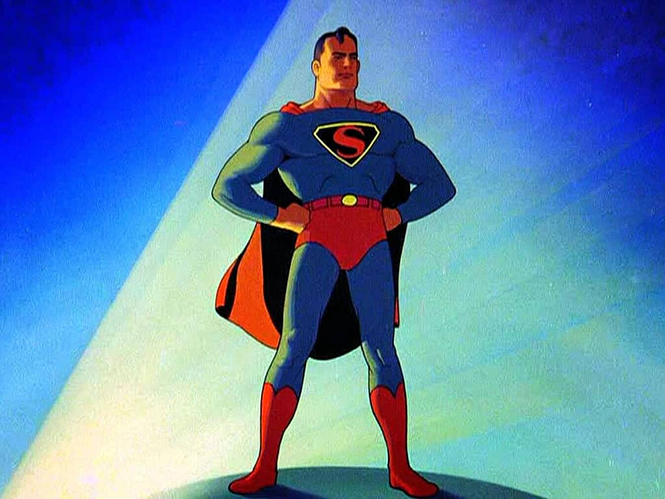 For this inaugural adventure, we’re going back to where it all began for Superman in the comics, his theatrically released adventures and his tenure in animation. It’s a whirlwind of action and adventure as only the mighty Superman can provide!

There we have it, the first week of all new action and adventure starring that extraordinary being from the planet Krypton, Superman! This discussion will run for one week, from Friday, November 8th to next Friday, November 15th. Pull up your boots and strap on your cape for FUN!

Next week: A CRISIS!

Nice! I’ve read and seen these before, but you can never go wrong in going back.

Absolutely! There’s always something new to find that wasn’t found in one’s previous finding of the material.

It’s great to go back to the beginning once in awhile.

For sure. It also (hopefully) makes the club appealing to people who don’t know alot about Superman, but would like to and are just trying to find an easy, easy entry point into his wonderful franchise.

I ain’t bustin’ out the 12-part Triangle Era epics until week 6, at minimum.

I’m very familiar with the first two years or so of Golden Age Superman. The real blind spot in my knowledge is the radio show, which I have listened to in spurts but not in earnest. I’m actually far more fond of Golden Age Superman than I am Modern Superman. I prefer his more limited powers and his left-wing populism. That said, the preference gap was smaller during the recent Rebirth (i.e. pre-Bendis) period, where we got to see Supes as a family man.

Superman #1 gives us the earliest Action Comics stories in one place, and it gives the very first story a proper beginning. That said, the first Fleischer short is nigh perfect.

I’m going to post as I get to reading/watching each thing and my thoughts on each one.

Truly, one of the best posts in the history of DCU so far.

I agree that The Mad Scientist is perfect. Its just as entertaining to me as an adult as it was when I was a kid, if not more so, due to how much more I know about animation now than I did then.

I’m going to answer question 2 way ahead of the others, which I will get back to in the next day or two. I believe I may have seen some of the Fleischer shorts at one time but it was so long ago that I sure didn’t remember these particular ones. I really enjoyed them though and I think now they have become my favorite animated adaptation of Superman. There’s just something about the animation that really appeals to me.

Here’s some remarks on the series by our own Whitney Moore:

And here’s a superb video in praise of the shorts:

As a kid, I found the Fleischer Superman shorts appealing due to the fact that their tone was serious and they were beautifully animated stories.

Back then, I wasn’t into Superman nearly as much as I would be in the years that followed, but for several years these shorts were one of the things that best defined Superman for me.

Whenever the next live action Superman movie comes along, I think it’d be rad to have an animated short with the quality of these tales play in front of the movie as a tribute to the work of Fleischer Studios.

Speaking of Dave and Max Fleischer, there’s at least one easter egg involving them in Superman: The Animated Series.

In “Little Girl Lost” (part 1 if memory serves), Lois and Clark are at a symposium where scientists are discussing the Fleischer Comet. When 14 year old me saw that for the first time, I had a big 'ol smile on my face.

Speaking of the DCAU, I believe Timm, Dini and all the folks who initially worked on Batman: The Animated Series cited the Fleischer cartoons as a major inspiration for the series.

Indeed they did @Jay_Kay. That’s another Accomplishment Feather that can go in the Fleischer hat.

I can’t think of very many classic cartoons that would go on to influence an entire universe 50 years after their debut. A universe that is 27 years young itself by now.

Max and Dave would be proud.

@Vroom Is there a way for you to pin this?

What’s your familiarity with the Golden Age era of Superman, and what do you like or dislike about this iteration of The Man of Steel compared to how he is seen today?

I’ve read quite a bit of the golden age DC stuff and have a few of the archive collections they used to do. They’re fun to go back to and see where the original ideas came from, the stuff that was there in the beginning. Like, in what we read this week, the office boy is officially credited as Jimmy Olsen’s first comic book appearance. Like most other DC fans, I’ve read Action #1 a bajillion times.

I can’t really compare them to the modern stuff, the character was very different in the early years. Certainly not an overgrown boy scout like he eventually became.

An aside: how mean was it of Superman to ask the doc to try again? He already busted 6 needles, Superman knows the 7th won’t work, and still he’s all, “come on, try one more time!” You can practically see him chuckling at the poor guy. Super-jerky, Superman!!!

Have you seen these shorts before and what are your thoughts on them? Along the topic of Superman in animation, what’s your favorite animated Superman adaptation (it can be a movie and/or TV show).

When I was a wee lad, someone (maybe my grandma?) gave me a VHS of these shorts, but I was too young to really appreciate them. I think I must have been expecting something more akin to the cartoons I watched on Saturday mornings, so I really didn’t get 'em. This is my first time watching them as an adult and I liked them very much. They’re beautiful things.

Between Superman’s inaugural adventures in Action Comics (his flagship title), Superman (the first ever solo superhero ongoing series) and the Fleischer’s museum worthy output, just which of these is your favorite introduction to Superman?

Reading and watching them side by side like this, I’m going to go with the cartoons. To be fair, though, that may be because I was less familiar with them.

My main reference for Golden Age Superman were story reprints in the back on new Superman issues in the 70s. I did buy the oversized Action #1 reprint that must have come out in the mid-70s. But, since the app started I’ve been slowly working my way through both Detective and Action from the beginning. I’m up to Action #50 and I started Superman from the beginning when #1 dropped here a few weeks back. I’m up to #6 there. They are all very enjoyable and reading one or two a week keeps it from getting dull. It’s always fun to see what carnage young Superman is going to cause to used car salesmen, cheap housing developers, slot machine operators, etc that irritate him. By the time they start publishing Superman, the quality of the stories, particularly the art has improved. My other early thought is Lois goes from being just horrible, to kinda likable kinda a pain. I think it was two young guys trying to write this female character that they didn’t completely understand.

@ralphsix I too discovered the Fleischer Superman shorts on VHS. I’m glad you enjoyed them, and thanks for your thoughts, particularly about Superman needling the doc.

@msgtv I agree about Lois’ evolution, and you’re likely spot-on to it being that Siegel and Shuster hadn’t yet found a consistent creative groove with Lois.

Well, it’s par for the course with classic Superman:
http://www.superdickery.com/tag/superman-is-a-dick/

And I would argue that post-Crisis Superman is a jerk in his own right–just a different kind of jerk. He always came off to me as self-righteous and judgmental when Byrne wrote him, and that attitude carried into the 90s animated series (though it was less common in the Triangle Era, oddly enough).

Siegel and Shuster hadn’t yet found a consistent creative groove with Lois.

Still, it’s astonishing just how much they had nailed down the Lois-Clark dynamic in the very first issue, despite the room for improvement. And even in modern retellings, Lois is usually an awful person to Clark when they first meet. Really, it’s Lois’s belittling attitude and Superman’s dickishness that make them perfect for one another.

(My favorite thing Lois ever does to Clark is in the Fleischer short “Volcano,” where she steals his press pass so that she can cover the story herself. There’s a word for that kind of behavior, but the censors would block me from using it.)

@AlexanderKnox With regards to the “Volcano” short, does the word you’re thinking of rhyme with “richyness”?