A thought that always seems to go through my head all the time is where are all the dc cities and places located. The DCU is an interesting place with fact that you have fictional and real places coexisting, while also most times acting as replacements for real major cities. Also throughout the comics and other media including atlases you have attempts at pinpointing these places but there is also a lot of contractions. So let’s see if we can see where everyone thinks these places are.

Here are my personal thoughts to get the ball rolling; Gotham is in South New Jersey around Cape May. Metropolis is New York City more or less. Central City is Kansas City, MO/ Keystone City is Kansas City,KS. National City is possibly somewhere near Washington DC. Bludhaven is Boston. Coast City is San Diego. Star City and Seattle interchangeable from each other. Chicago, Detroit, and Washington DC are themselves.

What do you all think? That’s just a few cities let me know where you think things are and any other places locations as well.

Canonically speaking the DC Earth(s) are bigger than our Earth. So Gotham, Metropolis, Coast City,etc. all exist in addition to Jersey, NYC, San Diego, etc.

So does New York, just to be confusing…

Bludhaven is like Las Vegas. The main industry is Tourism and Casinos.

I don’t think there’s ever been any indication that any real cities don’t exist. Obviously it’s inconsistent, but here’s where I tend to place things:

Metropolis is similar to New York, but when they try to put it in an actual location, it’s more often in Delaware. Especially since New York pretty explicitly actually exists in the DCU, so even if Metropolis is in New York State, it’s not sitting right where New York City is.

I figured Gotham and Metropolis were on opposite sides of the Delaware bay, which would make your placement of Gotham pretty accurate.

Bludhaven has always been about a half hour’s drive from Gotham, so if Gotham is in New Jersey, Bludhaven would have to be there or maybe around Philadelphia somewhere at the outside. Besides, Boston definitely exists because Wonder Woman was based there for a while.

Central and Keystone are probably in Missouri and Kansas, respectively, but maybe a bit north of Kansas City.

San Diego definitely exists because a part of it fell into the ocean and was Aquaman’s base for a while. All we really know about Coast City is that it’s somewhere on the California Coast and near Edwards Air Force Base. It might be between LA and San Diego somewhere.

The Green Arrow books have been pretty explicit that Star City and Seattle are two different cities, and that Star is in California. It’s probably up north of San Francisco near the Oregon border, though.

Hub City’s a hard one to place. It comes across as very Detroit-ish, so I’m tempted to say Michigan.

Smallville is usually in Kansas somewhere.

I don’t really know enough about some of the others like National and Opal to place them very well.

@Nathan.Payson: Bludhaven is more like Atlantic City, NJ. They’re also heavy on casinos, but they’re on the east coast, like Gotham.

Gotham is definitely not Jersey lol

Gotham is definitely more like Detroit amd pretty sure Gotham is based off more of Detroit than anything judging by the structures.

The real Wayne Manor is there

Metropolis would probably be NYC or Chicago, those are the only ones that really make sense.

Star City would be by Toronto, Canada (Not too far from Detroit Gotham).

Titans Tower would be in Cali’s mountains and not far from Hollywood, this shown in the Teen Titans Go movie.

Season 2 of Young Justice mainly took place in Texas iirc, and actually used names of cities and towns so that’s a given.

Fortress Of Solitude is Antarctica.

Big Belly Burger is definitely What-A-Burger in disguise, no question there.

I’m not too familiar with Bludhaven so I can’t say much about it.

This is the first time I’ve ever heard people comparing Gotham to Jersey… interesting.

oh, did not know that about Aquaman and a sunken San Diego … Greg Rucka also used that city in Rebirth: Diana and Steve arrive from Themyscira on Coronado naval base and then fight terrorists at Horton Plaza downtown …

from the show, references and maps seem to indicate National City is about where San Luis Obispo is now, on the west coast–north of LA, south of the Bay Area

Metropolis can’t be New York City because NYC exists in the DCU. I think the “Big Apricot” is south of NYC (either in Maryland or Delaware) and Gotham is between New York and Metropolis. And am I crazy or back in the day when Green Arrow was a backup feature in Action comics was not Star City in New England?

http://www.karridian.net/dcatlas.html this is tge most comprehensive collection of geographical maps of cities in the DCU, it is based on the Atlas of the DC Universe, by Paul Kupperberg.

Metropolis doesn’t make much sense for anywhere other than New York, Chicago or maybe Seattle. Even if they exists in the comics world.

In Titans, Ric Grayson goes to Detroit from Gotham but Gotham isn’t far of a drive, Raven is originally 2 hours north of Detroit and Beastboy is from the stateline more or less of Ohio and Michigan. Tells me that Gotham is on the outskirts of Detroit.

If we try to get too technical, things won’t mKe sense and that’s probably because geography in comics isn’t consistant.

I mean, I realize that there are alot of people who think Gotham was based off of NYC:
https://www.quora.com/Is-Gotham-City-based-on-any-city

But the rise and fall of Detroit is what makes Detroit the perfect representation of Gotham, nevermind alot of buildings being inspired by it and vice verse.

Look at this pic of Detroit for instance… 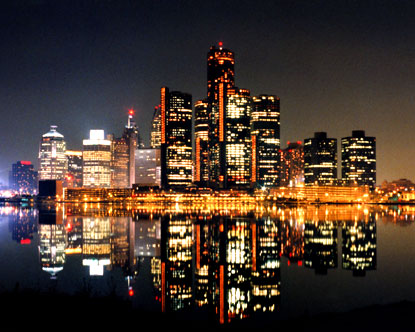 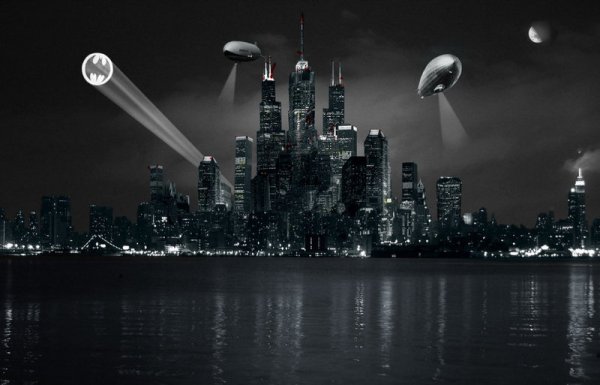 Lastly, both GM Renaissance Center and Wayne industries have monorails leading to them, this is important to mention because these are the tallest buildings in both Detroit and Gotham.

Make no mistake, Detroit is Gotham and Gotham is Detroit…

No real world city is replaced by a fictional city in the DC Universe. Gotham City is traditionally depicted as being located in New Jersey according to:

Or at least that’s what Wikipedia says.

However, Gotham City has occasional been depicted as being in the state of New York along with Metropolis and New York City

Well I mean, that’s easy, just make a fictional town/city on the outside/inside of a major existing one or create an ownership district to provoke a thought inducing story such as:

In real life, Detroit is a city in Wayne county, in comic world any writer can say the Wayne family was honored this way because Wayne Industries is what keeps it alive after the crash of GM and Ford caused the fall of Michigan.

Either way, Detroit and it’s surrounding districts are much closer to that in resemblance of Gotham than NYC and New Jersey ever was. Overlooking how many DC characters came out of downriver, Michigan and their relations to Gotham makes me believe it’s even more reasonable. Though I doubt any of DC’a writers will say that Gotham is in Detroit since Cyborg is from there and Martian Manhunter lives there. With the inconsistency that is on DC’s locations and where they are located, it doesn’t at does not surprise me if there were 2 Gothams, one being in NY and another in New Jersey.

You can make an argument that Metropolis is in Kansas. In Smallville, it was a short drive from Smallville to Metropolis.