I’m thinking we did one from the New 52 era one here with the DCU Book Club.

Yes! We covered it in week 8 of the club.

My favorite storyline was in Green Lantern Corp just before New 52 rolled out, by Tony Bedard concerning the Qwardian known as the “Weaponer.” It had an almost “Lord of The Rings” feel to it, or like that scene in the movie Infinity Wars where Thor goes to the outer space Asgardian weapons maker.

Sounds fun! I haven’t read that one yet.

In general I like the scenes at Edwards Air Force base, the military life angle. I’m real sure G Johns later drops the whole concept as he rolls out that rainbow colors of the Lanterns concept, Blackest Night etc, but bringing the connection between private industry test pilot and the armed forces is a natural extension of the fictional world of GL.

I liked the military life angle as well. And that’s a great point!

Thanks for posting this Green Lantern reading

You’re very welcome! Thanks for reading along and peace out right back atcha

Behold the Weaponer of Qward! 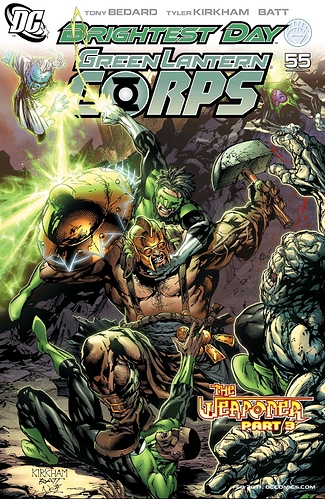 Little late, but here’s a little something:

Is this your first time reading Green Lantern: No Fear?

No – I read it a while back around the time that Blackest Night was going on and gave the Hal series a shot after being burned by Rebirth. Then recently I reread these issues when I was picking up the Walmart100-Page Giants. So needless to say this was more of a thumbing around, though I still probably read more than I didn’t.

What is your favorite Green Lantern story (if you have one)?

Johns’ run is definitely a high water mark for the series. I also really liked the Jessica and Simon led Green Lanterns book. I haven’t read a lot of Grant Morrison’s run yet but I’m sure it’s up my alley. Tom King’s brief moments with GL in the Darkseid War Special and in some respects The Omega Men were great and I would love to see him take that side of the DCU on. I remember a more prestige series called Will World being pretty cool. Green Lantern: Mosaic was really cool examination of John Stwart as a character – sad that it was removed from the service and really everywhere though I can kinda understand why.

What was your reaction to how Hal charged his ring in the end?

It was reckless, dangerous, an idea that only makes sense at the moment and if there was even a moment of hesitation, he would have been a grease stain on the desert earth.

In other words, it was a perfectly on brand Hal Jordan move.

What was your favorite panel or moment?

I liked his interaction with his younger brother and his story of overcoming his fear. It sets up this great humanizing factor for Hal, desperately needed for a character like him, and something I wish they used more often. Similarly, I remember liking Cowgirl as a character and I wished they did more with her.

Another great moment, more because of how fans have played with it over the years, was Hal as GL punching the Air Force General in the face. Some of my favorites done with that that I can find now are: 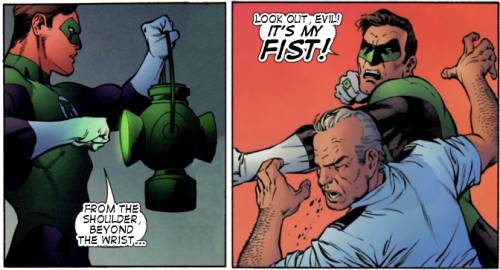 It was reckless, dangerous, an idea that only makes sense at the moment and if there was even a moment of hesitation, he would have been a grease stain on the desert earth.

In other words, it was a perfectly on brand Hal Jordan move.

It sets up this great humanizing factor for Hal, desperately needed for a character like him, and something I wish they used more often

I agree. It made him relatable.

The “look out evil! It’s my fist!” was great

Thanks for joining in!