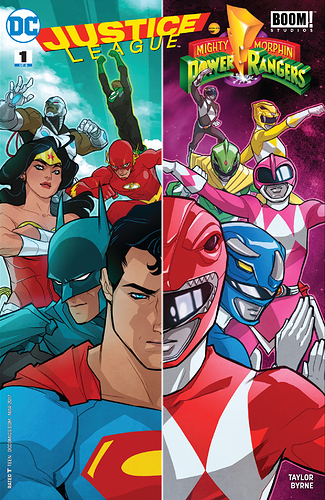 Two of comics greatest teams team up for the very first time! Something terrible has happened in Angel Grove! When the Command Center is breached and the teleporters are damaged, Zack is flung into another universe, where he’s mistaken for a villain by a mysterious masked vigilante. Can the other Power Rangers get to their friend in time to save him from Batman? Co-published with BOOM! Studios.

It’s Morphin’ time! This week DCUBC is jumping into Justice League / Power Rangers. The crossover you never knew you wanted! I can’t wait to hear what you think!

I remember buying this series, issue by issue, as it was published. Really looking forward to revisiting it!

Nope, bought every issue as it came out. Same as JL

Been a fan since I can remember. MMPR is the first Ranger series I watched. My older siblings had VHS tapes of it and they’d constantly run reruns of it. 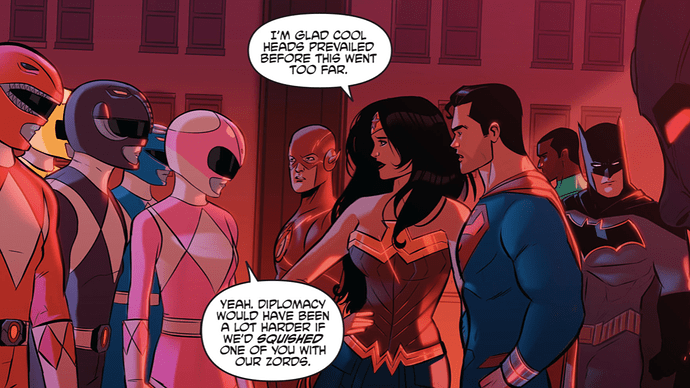 There are so many good panels. I’ll have to revisit this series again.

Okay, being a kid of the 90s, I have a LOT more experience with Power Rangers.

I distinctly remember being super into the original show, and as a kid I think I watched the show up until In Space. I also was into the movies, loved the first one as a kid (and I distinctly remember annoying my mom with way too much McDonalds to get all the MegaZord pieces). and remember the movie where they converted into rescue vehicles, but not the name. Also, anyone else remember the Christmas special/cassette they did?

More recently I haven’t seen much with it. I watched the most recent Power Rangers movie, which I thought was pretty decent. I also got the first volume of the modern comic series on Kindle as a freebee offer they did a while back, but haven’t read it. I think I’m going to pop that file open, though.

I just finished issue 1 and I like where this going! LOL. 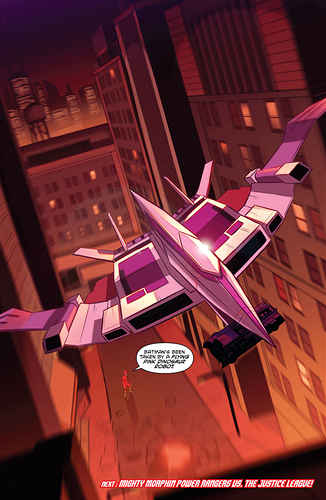 If you read again do let us know if your opions change with a re read. Thanks for dropping in! Always nice to hear from ya!

Okay so that’s a long history with Power Rangers. Wow! Can’t wait to hear what you think of the book.

I bought this by issue too! I was hooked when this was coming out!

I (somewhat) recently read this, so I’ll jump into Zee Questions:

I read the toy mags of the day and knew what Bandai was making and had on the way for Power Rangers, but nope, that kid somehow still had a Putty action figure. Uh, huh…

I can enjoy a silly, goofy movie as much as anyone and while MMPR will never be on the level of Hitchcock, that first movie really sucked. It’s saving graces were Kimberly, the Falcon Zord and Ivan Ooze being played by Paul Freeman (Belloq from Raiders of the Lost Ark).

I generally haven’t liked Power Rangers since I was in my teens, but this book was a fun re-entry into the PR material I did like.

I sincerely hope someone is writing a Lobo/Lord Zedd comic, as that would be

Lobo: “I got your attitude RIGHT HERE (Lobo is pointing to his crotch, ala the cover of Lobo #1) Zordon!”

Is this your first time reading Justice League / Power Rangers?

Yes, and there’s reason for that:

What is your history with Power Rangers?

Okay, I am just simply too old for the Power Rangers. I’m thinking about 10 years too old. I didn’t get them then and, truthfully, I don’t really get them now. How @Vroom felt about the movie? Sorry, but that’s how I feel about the whole Power Ranger phenomenon.

That being said, I still found this series to be okay. Not great, not bad, but certainly worth reading once. Only once in my opinion, but I didn’t hate it.

I liked Zach on the Ranger side, and Flash on the DC side.

Well, you’ll recall a few seconds ago, I hope, when I said I wasn’t all that into the Power Rangers? So, my favorite part was when they all dressed like characters from DC. And her asking to keep the boxing glove arrow was cute…I would want to, as well!

It’s Morphin Time! Great pick I love the JL and Power Rangers. Will do my best to get to this one but know this week is crazy busy. If I don’t, just want to say I approve of this thread

I love the sarcasm/comedy so far, like knowing the difference between a good guy and Batman is a “smile”, also is: 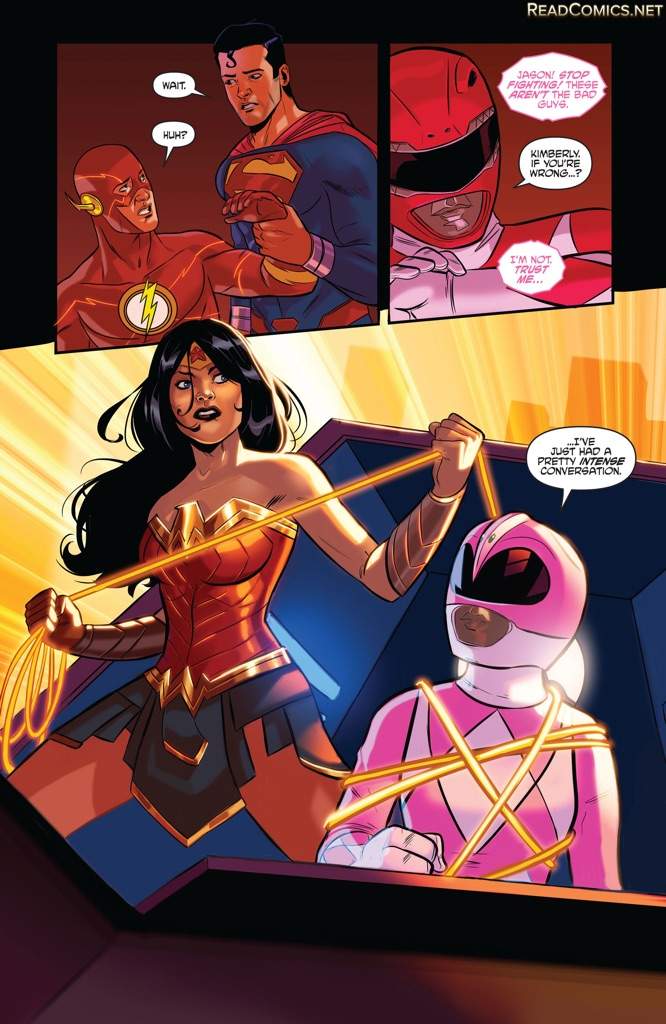 I generally haven’t liked Power Rangers since I was in my teens, but this book was a fun re-entry into the PR material I did like.

One of my favorite things about crossover books is exactly this. Thank you for sharing your storied history with the PR franchise. I always love hearing about people’s connections to different franchises.

That being said, I still found this series to be okay. Not great, not bad, but certainly worth reading once. Only once in my opinion, but I didn’t hate it.

Thanks for giving it a shot!

I’m on the opposite end of the spectrum in terms of missing Power Rangers. I was too young to catch the Power Rangers craze. I probably missed it by a few years. It always seemed a bit too goofy for me.

If it weren’t for this book I’d probably know nothing about them.

ahh that moment is fantastic!

Y’know, looking at Diana’s face there, it makes me wonder just what else did Kimberly admit?