Read Watchmen when the series came out. When I reduced my collection to the essentials, I naturally kept them so I’ve got all 12. Along with COIE, and Moore’s Swampthing probably the most important comics of the 80s.
What struck me most about this series was the many strong parallels between Dan’s life and JMS’s. Having read his Autobiographical Becoming Superman you can’t help seeing JMS in Dan. First the violent father abusing the mother and Dan’s guilt over not having done anything. The father’s disdain for Dan’s hero collection mirrors JMS’s father destroying his comics. Finally, when Dan tells the retired Nite Owl how looking up to him gave him strength to make it as a kid, JMS felt the same way about Superman. That’s honest emotional writing.
I picked this panel because it gives Rorschach some growth from his own demons. 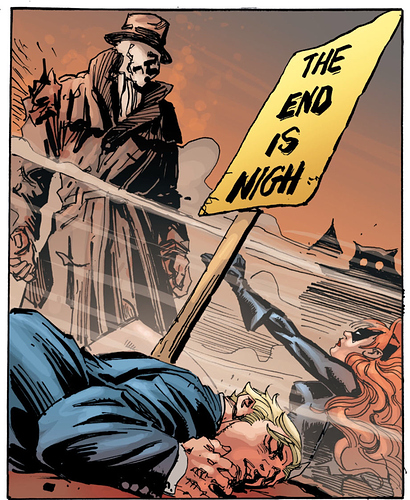 Sweet is the first word that comes to mind. I was impressed with his ideas at such a young age, and his determination. How he found something positive to get him through hardship.

He reminds me a lot of Tim Drake’s Robin which is probably why I liked him so much here. He’s a go getter who WANTS to put on the mask.

I don’t really have a favorite scene. The art is quite lovely from start to finish as a whole.

RIGHT?! All four issues kept me engaged from start to finish.

What struck me most about this series was the many strong parallels between Dan’s life and JMS’s. Having read his Autobiographical Becoming Superman you can’t help seeing JMS in Dan.

Okay I’ve got to read this auto biography. Issue One was a tough read already.

Hope everyone had a great New Years and here’s to another great year reading and discussing more awesome comic books in this great club. Anyway on to the discussion questions.

What is your history with Watchmen?

My history is the movie. I have read a few of the original issues of Watchmen but never completed the whole series.

Is this your first time reading Before Watchmen: Nite Owl?

Yes this is the first time reading this miniseries.

What did you think of our titular hero, Nite Owl?

I think Nite Owl is strong and smart. Strong because of all the difficulties that he faced as a child he could of been a very different person. He is smart because of the way he tracked down the original Nite Owl and of all the gadget that he made to assist him in his crime fighting.

My favorite page was 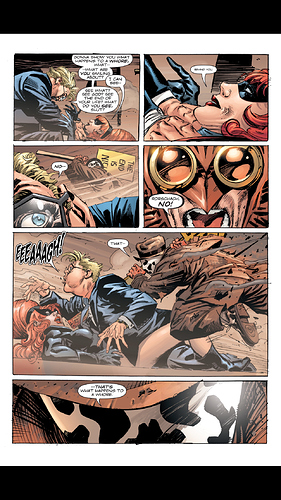 image1242×2208 1.87 MB
I thought Nite Owl was at first talking about the reverend but than at the end he was actually talking about Rorschach.

I really enjoyed this miniseries and hopefully will read a few more and also start again and finish Watchmen the original series. So I am glad you choose it for book club.

Ok Wow! This was amazing! I love the art, the writing style, and the pace of the book. I’m actually struggling to find words to describe how much I liked this book. I like it a lot more than the Watchmen movie. It was gritty and balanced - it was never wanted to look away. Like @Jay_Kay I couldn’t stop reading once I started.

Like @ProActress2O, my only exposure to Watchmen was the movie.

Like @Lecouch84, really enjoyed this and will hopefully read more of the series, as well as watch the new Watchmen TV show. I wasn’t particularly drawn to the show, but after reading this, I’m absolutely going to watch the TV show and am excited to watch it.

I watched the movie, but that’s all I’ve seen or read related to Watchmen.

Not to be dramatic - but… I love him.

He really has a good heart, is resilient, smart

This moment had no words, the art was so powerful and did all the talking.

Before watchmen nite owl 21430×707 945 KB
This is just deep, I started rethinking my whole life at this moment 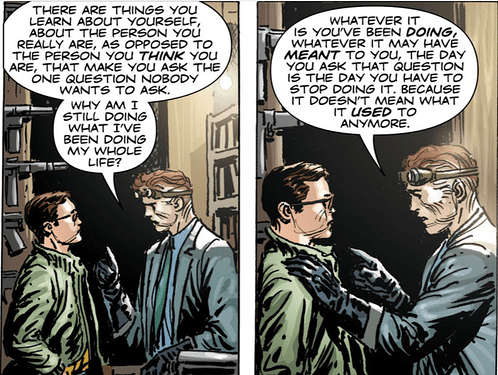 I really can’t say it enough - this was an EXCELLENT comic! Thank you for finding this and highlighting it @MattMcDonald

I don’t remember the exact order of the first comics I ever read, but I’m pretty certain that Watchmen was like second or third. It was one of those stories that made me fall in love with comics. As I got older I think the shine of it kind of waned a bit (Alan Moore can’t write women to save his life), but it’s still an important and influential work in comics and even if it’s a smidge overrated, it’s still pretty damn good.

Yes – I had read some of the other Before Watchmen books, like Minutemen, Silk Spectre and Rorschach, but not this one.

He definitely comes off a lot more interesting here. I think it’s partly because here his struggle has less to do with “I’m old and pudgy and can’t get it up without my mask.”

I thought it was very interesting to see that Dan approached Hollis so early and was actually trained by him. Maybe I’m misremembering an important detail, but I always got the idea from the original comic that Dan simply approached him as an adult after Hollis retired, showed him around his new base and decided he’s good enough for the job. If that’s the case, then I like this version of it WAY better.

The origin into his childhood was also heartbreaking to see. It speaks to his character that he would face such hate and callousness and instead of absorbing it, he rejects it and finds a better symbol in the form of someone who protects the innocent.

There’s a lot of good moments in this! One that comes to mind is the Twilight Lady’s reaction to Dan taking the mask off. Really, any page with her was a delight.

I really enjoyed this miniseries and hopefully will read a few more and also start again and finish Watchmen the original series. So I am glad you choose it for book club.

Thanks for reading and I’m glad you liked it! I think it sets up the original very well! Hope you keep reading

Not to be dramatic - but… I love him.

He really has a good heart, is resilient, smart

Out of all the Watchmen characters he’s always been my favorite! Seeing his backstory made me love him even more!

but I always got the idea from the original comic that Dan simply approached him as an adult after Hollis retired,

Not that you mention it that does sound familiar. If true that’s a major oversight.

What’s inspiring about the writer JMS and what he brings to his TV, movies and comic book stories is pointing out that we all have stuff going on, many have suffered things in our childhood that we had no control over, and part of our potential posiive life journey to becoming better people is when we get a chance to admit it honestly to ourself and then hopefully find some help, voicing the truth of the damage, and maybe finding some healing.

One tiny footnote on this 4 issue series- I’m not a huge fan of the oft-repeated theme in comics that if someone is passionate about their beliefs, they are probably deeply evil murderers or committing some other high crimes financially etc. It actually is possible for a person to become a more selfless and loving person as they follow their faith. I’ve enjoyed so much the stories of Ms. Marvel and Daredevil that show the positives that taking your beliefs about areas of religion and faith seriously and passionately can lead to.

One thing I forgot to mention that I thought was interesting about this was how connected this series also was to other series in the Before Watchmen “line”, for lack of a better word. Like, the stuff that Hollis talks about as a regret on his part is taken straight from Darwyn Cooke’s Minutemen series.

Also, that is a fantastic panel with Rorschach!

Thank you! That is one thing that I strongly dislike seeing. I know there are people out there who are really just self-righteous jerks, but not every “religious” person is like that.

Had the same thought about the minister as @Don-El and @NovellPaladin that crazy evil religious guy is over used but I did think JMS pulled it off here.

For sure lots of depth for the story, especially for a comic book story.

As I continue to dig in to JMS’s autobiography, I see this Nite Owl story is even more autobiographical since JMS and his wife joined a “hippie” independent Church in California when they were very young and had an awful experience with an authoritarian pastor.

I forgot that section, yep that was an evil dude hiding under the guise of religion