“What do you think of our setting, The Ninth Tride?”

It’s a cool setting, definitely helps flesh out the world of Atlantis. Two things bug me about it, though.

I would go with the moment where Dolphin convinces Arthur to fight alongside the resistance, even though he is reluctant and burned out from being the King before. It really showcases both Arthur and Dolphin’s character.

“Who was your favorite character?”

Dolphin, without question. She’s just a cool character who is introduced in the best way, with a great look, power-set, and fits perfectly with this different kind of story they’re telling. I’m also glad that they didn’t take the easy route for drama and make her a potential romantic interest for Arthur, especially since they initially had a connection back in Pre-Flashpoint continuity (though she did eventually marry and have kids with Garth instead). Arthur and Dolphin had this great, platonic, but strong bonding together through the course of these six issues, that I really hope that she continues to be a presence in this series.

I’m so happy you called out King Shark. He was really cool.

@Jay_Kay
Are you talking about this scene? I absolutely adored this scene. I finished reading through issue 38 today and Dolphin remains as presence and key player. I really like her. 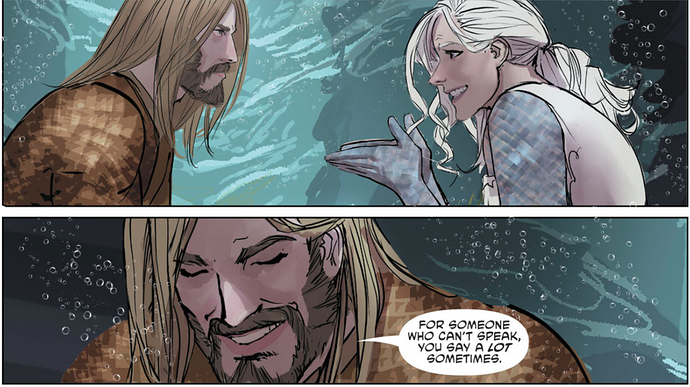 That’s the one! Really does a good job showing what his mission/presence should be in Atlantis if he is not to be king, where he is a hero to Atlantis much like Superman is to Metropolis, or Batman to Gotham.

It also amuses me that even in the lowest parts of Atlantis, they know of the Trinity.

Also, that makes me happy to know she’s still around. I wonder if that still holds up with Kelly Sue Deconnick’s run – I know she’s had Arthur disconnected from Atlantis/the regular world for a hot minute, and she recently brought back Jackson Hyde/Aqualad.

I think one of the great things about the Aquaman book from the New 52 onward is that it’s had revamps and new status quos, but seemingly haven’t wiped away what came before, with each writer bringing out their A-game with it. It reminds me a bit of the Daredevil title which has had a similar deal since it’s Marvel Knights revamp (though with far less extreme status quo changes in the hand off).

Wow. That’s a great point about 8 Mile. I’ve never thought of that! Thanks for sharing!

When I first read this I was so worried that they would set Dolphin up as a potential love interest. With Mera being away I thought it was certain. I’m so glad they didn’t go that route as well.

First time reading Underworld - and Aquaman outside Justice League. I don’t know where I’ve been all these years.
The story of the Nine Trides,how the narrative mentions the organic waste drifting down to the bottom makes it sound appropriately rank, but at the same time it’s in the crevasse that caused Atlantis to fall, so it’s possibly the first place of the “new” Atlantis, building outside the city. A district w/mutants is alwys full of interesting stories.
While Dolphin and Krush represent the ppl of the Ninth, it could’ve been better w/some exposition shots of the tride with more citizens. We saw the markets of the third tride, why not the ninth, too?
The best moment is Krush’s explanation to Arthur about fairness in the world and taking his opportunities to reach the top. It’s good foreshadowing to Arthur 's explanation to Dolphin about how the ppl didn’t like his ambition for the kingdom, suggesting that despite being king, a king still needs support of the ppl. I enjoy Greek-like adventure fantasy better than medieval w/princes & divine right and all that. So I like that Dolphin talks him into being a hero rather than ruler. All this butchery for a single ruler- maybe Atlantis should switch to a democracy. There’s enough power groups like the mages & the widowhood for different representatives, plus leaders from all nine trides. I digress.
We don’t learn much about her in six issues, but Ondine’s attitude when talking with Vrusk caught my attention. Reading more about how she’s a disgraced widow would be intriguing. Of course all the main dudes are always the coolest, and seeing King Shark’s smiling toothy maw is great.

Ondine is actually my favorite character here. I absolutely ADORE her. I’d love to see more of her! Thanks for joining us!

Thanks for joining in everyone! Just a bit longer until discussion ends? Last minute thoughts!

Ondine’s sass, wit, and attitude are fabulous and are a great contrast to Vulko’s personality! Loved this run.

Dolphin because of all she’s capable of (her character design is really rad too) and Rath because he’s a perfect ass of a villain. The kind that when they don’t get their way you feel a swell of joy inside and think “Good. You don’t deserve anything anyway, except a solid defeat.”

During this re-read, I realized that Underworld just might be one of my favorite modern Aquaman stories. It’s right up there with “Sub-Diego”, “Once and Future” and “Throne of Atlantis”.