This week we are diving into Two Face: Year One! Written by Mark Sable, with art from Jesus Saiz, Jeremy Haun, and Jimmy Palmiotti!

Spoiler discussion begins RIGHT NOW and lasts until Sunday (8/18) so flip a coin and join us!

1.) Is this your frist time reading Two Face Year One?

2.)What’s your favorite story featuring Two Face? How does this one compare?

3.)Where does this book rank among other ‘Year One’ titles? 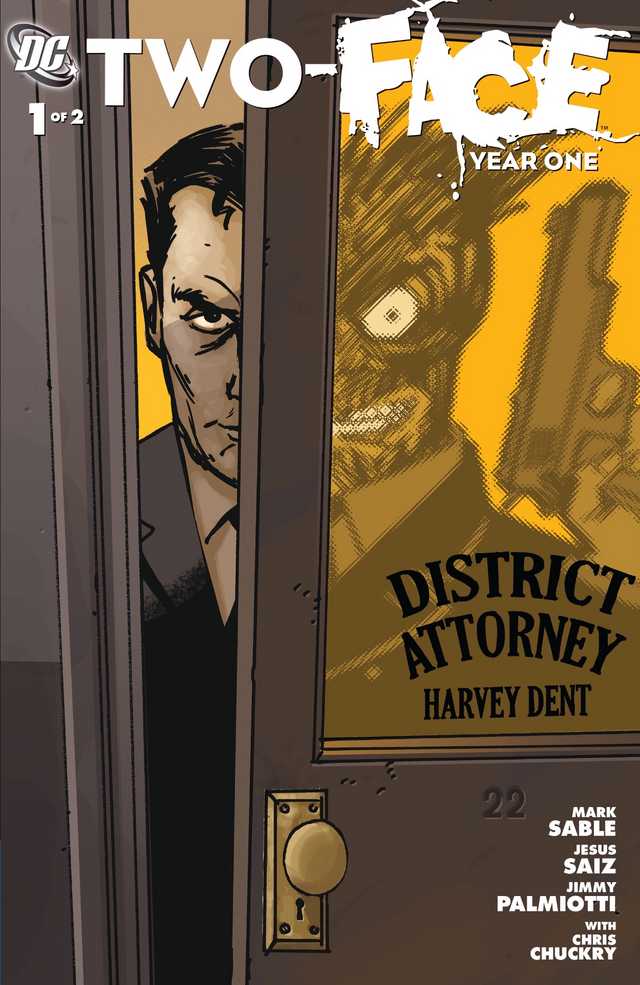 1.) Is this your first time reading Two Face Year One?
It is! I saw it when it came to the app and was curious because I’d never heard of this before. I ran through both issues and LOVED it!

2.)What’s your favorite story featuring Two Face? How does this one compare?
This is gonna sound silly, but my favorite story featuring Two-Face is from The Untold Legend of Batman # 2 where Batman goes over his origin. I had the MPI audio cassette and small comic this came with. It was like an audio drama for kids; it had music, sound effects, voice actors and a kick ass opening theme. This was my first expsoure to Two-Face and that always stuck with me. How does this story compare? Well, they’re two different animals, but I enjoy this story just as much.

3.)Where does this book rank among other ‘Year One’ titles?
I’d put it pretty high. There’s not a lot of Year One stories I love. At least with this we get flashbacks to Harvey’s time in college

4.)What was your favorite moment?
I love the scenes with Harvey and his psychiatrist. You could see the struggles he was going through even back then.

I feel like I MAY have read this a LONG time ago, back when I was reading via the library, but that was such a long time ago I probably don’t remember a lick of it.

Read or not read? flips a coin, observes which side it landed on Read! I was going to read it anyway though

Lessee, outside of comics, I love the “Two-Face” two-parter from BTAS, Batman Forever of course and the Judgment Night episode from The New Batman Adventures.

From the comics, hmmm. That’s a bit tougher to pick from. I liked “Face the Face”, which was the One Year Later crossover arc of Detective Comics and Batman.

1990’s Batman Annual #14, “The Eye of the Beholder” is a favorite too, as is Justice League of America #125 where Two-Face, much to Flash’s chagrin, joined the JLA.

For more recent fare, I’d go with “My Own Worst Enemy” from All-Star Batman. That’s easily my favorite story from that series.

I’ll answer the other questions after the re-read.

Two-Face is my favorite Batman villain, so I’m especially eager for this week’s Book Club.

1.) Is this your first time reading Two Face Year One?

2.)What’s your favorite story featuring Two Face? How does this one compare?

Batman The Long Halloween. This story played right into that, so I enjoyed it.

3.) Where does this book rank among other ‘Year One’ titles?

Probably in the middle.

The flashbacks were interesting. I’m actually not sure if I like the idea that Harvey was always violent or that he snaps later/is broken by the Gotham underworld, so favorite might be a bit strong, but I thought the concept was interesting.

I’d been looking for more Two-Face stories to read since the Long Halloween, so I was excited to see this. Thanks!

That is so cool! I love hearing about stuff like that. I wonder if the audio was ever digitized. I would love to check it out! Thank you so much for sharing, I’m so glad you liked it!

So happy you mentioned “My Own Worst Enemy!” As it rose through the ranks to become my favorite Two Face story.

It’s actually the only arc of All-Star Batman I’ve read, but I adore it!

Can’t wait to hear what you think of the book!

I’m glad to hear you enjoyed it. Since you said The Long Halloween was your favorite Two Face story, do you think this book borrows too much from Long Halloween?

I was nervous that folks might not dig this one because several narrative threads can be found in both books.

@MattMcDonald, I got one better for you. If you type in “DC comics The Untold Legend of Batman complete series” you’ll find a video that not only combines all three parts, but the person who put the video together added the comic pages to the audio. I wasn’t sure if we’re allowed to post Youtube links here, so I figure giving you the name of the video wouldn’t hurt just in case.

It might not be everyone’s cup of tea, but it brings back a lot of happy memories for me.

“Is this your frist time reading Two Face Year One?”

I thought I had read this before, because I remember reading something way early on that featured Two-Face, but I was way off.

On further reflection, I hadn’t read this one before. The book I was thinking of was the mini-series Batman: Jekyll & Hyde, which is sadly not on DCU or even digital. I remember liking it, though honestly I mostly remember it for having two of the more meme’d images of Batman. Attached is one of those said images.

“What’s your favorite story featuring Two Face? How does this one compare?”

The Long Halloween is a classic beyond doubt. I also really liked the “My Own Worst Enemy” arc from All-Star and really liked the idea of Harvey being the sort-of king blackmailer of Gotham who knows everyone’s secrets.

“Where does this book rank among other ‘Year One’ titles?”

I mean, let’s be real here – there’s Batman: Year One, and then there’s everything else. I can’t say I’ve read a lot of “Year One” stories, but nothing else with the Year One title matches Miller and Mazzucchelli, not even Miller’s second go at it on Superman with John Romita Jr.

Speaking of, while there’s a lot of references to The Long Halloween here, I did like the Year One reference they have here where they have Skeevers as one of the guys on the phone doing roundabout dirty calls against what’s-his-face’s political opponent.

“What, was your favorite moment?”

Similarly, the scene where the Batman villains are doing phone calls to get people to “vote Harvey Dent” was hilarious. 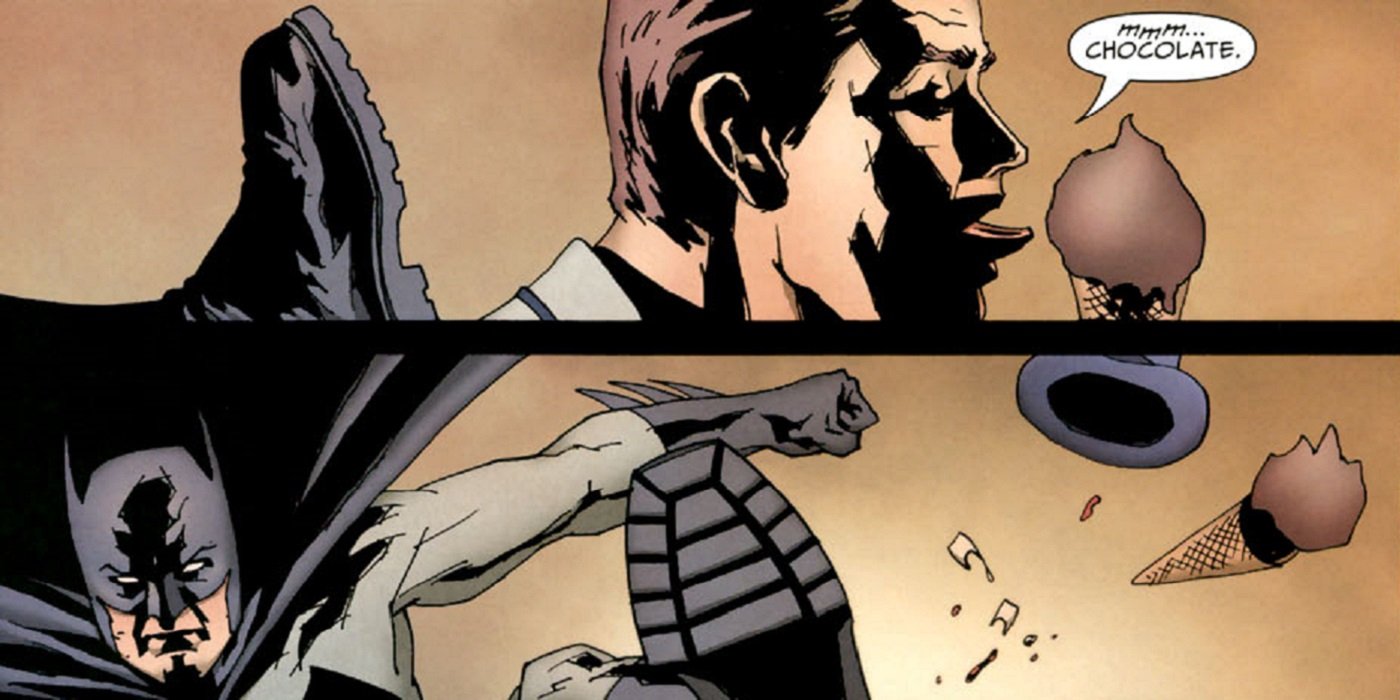 Here’s the other memed image from Jekyll & Hyde. Man, now I really want to see them digitalize this and put on on the service, if not just to see the context for this. 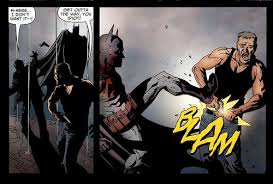 One thing that surprised me while reading this and felt kind of off to me that maybe someone here can explain since this is a bit of a gap in my comic knowledge: does it make sense that Maggie Sawyer would have transferred to Gotham in the sort of Year Two/The Long Halloween time period? Since Batman and Superman show up at around the same time, and Maggie, from what I understand, has a long-running story in the 90s era of Superman, I always figured that Maggie showed up at Gotham at sooner to year 5-6.

Another thing I forgot to mention earlier is how much I enjoy stories with Harvey both pre-scarring and immediately after. One of the reasons I like Two-Face as a character is not only for the duality, but also the tragedy. Harvey Dent might’ve been a flawed guy before, but he did a lot of good as District Attorney. Now he’s become what he wanted to put behind bars. The best stories are where some of the old Harvey breaks through the villainy, showing us he’s still partly the man he was.

I actually liked how it tied in with the Long Halloween. I kind of viewed this as a supplement/character focus for that story. I actually found some of the differences here a bit jarring, so I’m not sure how this reads independently. For example, I thought I skipped a page when the book jumped from the acid splash to an active Two-Face.

I actually don’t love Batman Year One as much as most. It’s not even in my top 3 Year One titles!

Its okay, Matt, nobody is perfect.

@MattMcDonald If I may, what are your top 3 Year One titles?