Welcome back to another exciting week of DC Universe Book Club, come on in and grab a seat!

Also known as I am Bane. This arc sees the Dark Knight duking it out with Bane, who will stop at nothing to break The Bat.

This is the perfect primer for the City of Bane event which kicks off this week with Batman 75 available at your local comic shop! (Or you know, comiXology)

Spoiler discussion begins RIGHT NOW and lasts until Sunday (7/21) evening. So make sure you let us know what you think!

2.) What would be your DC Character themed fast food joint? What’s on the menu?

3.) We had a lot of big moments in these issues, which one stood out the most?

4.) Did this book change your opinion of Bane?

Feel free to also let us know what you thought of this week’s selection as a whole. I can’t wait to hear from you! 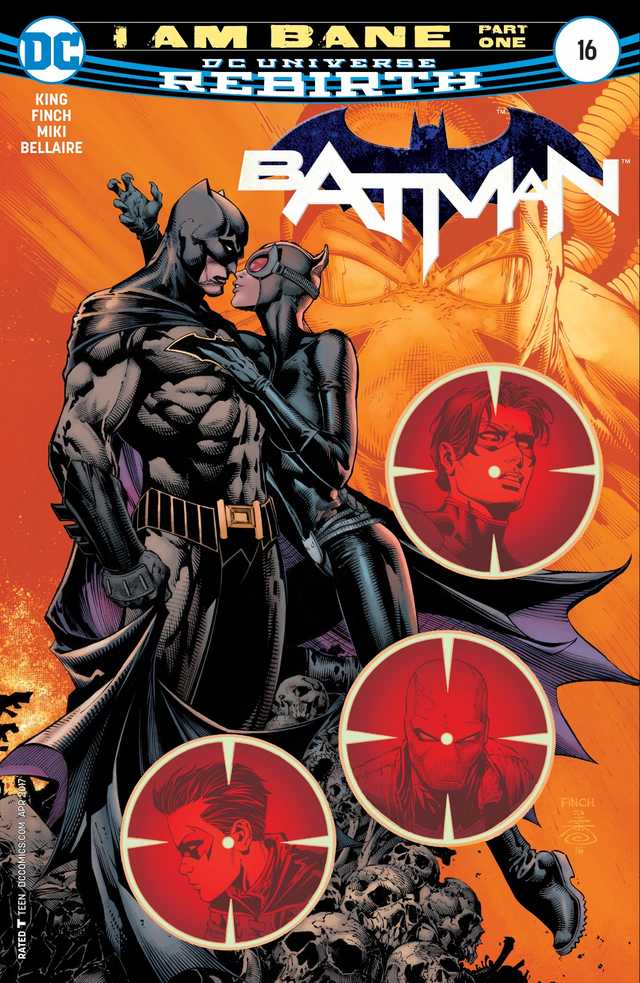 Sweet! I read it as it came out but haven’t really came back to it since. Looking forward to reading it again with a fresh set of eyes.

Also, this is an interesting choice, because I feel like this is the first time we’ve really done a book club that’s kind of in the middle of a story. I’m half tempted to put up a super quick synopsis of what happened before for anyone who might be reading this for the first time.

Also also, I’d be sort of tempted to add #24 to the list as well, because not only is that sort of an epilogue to I Am Bane, but also has a pretty huge moment in not just the Tom King run, but really Batman history in general.

I was originally going to put a brief description of characters average readers may not be familiar with. Such as Psycho Pirate and Gotham Girl, but I ran out of time.

You’re absolutely right about issue 24. It is an awesome epilogue to this story.

“I Am Bane” is essentially the last part of a trilogy that King started with his run, with a few arcs and cross-overs in-between to flesh things out.

The first arc, “I Am Gotham,” starts with Batman having to use all his skills to save a plane that is about to crash into the middle of Gotham City, but for all his gadgets and skill, the way he diverts the plane will end with his death. Bruce is talking with Alfred in what he thinks will be his final moments, telling his faithful companion what he’d want to tell his children, and asks Alfred, “Mother and Father – do you think they would be proud?”

But the plane – and Batman – are saved at the last minute by Gotham and Gotham Girl, new heroes who seemingly have similar powers to Superman. They’re young and inexperienced heroes who Batman decides to take under his wing, even if just to make sure they’re on the level. In investigating them, Batman finds out that their real names are Hank and Claire Clover, and they were inspired to become heroes after Batman saved a young Hank and his parents’ life in stopping them from being mugged. Even though Claire wasn’t there, she follows in her brother’s footsteps because she looks up to and idolizes him. They both train and study their minds, much like Batman, and when they became old enough they joined the Peace Corp – and at some point there, they ask their parents for a significant sum of money while overseas, using it from a still unknown source to get super-powers.

But Gotham and Gotham Girl’s arrival gets more than just Batman’s attention. Amanda Waller and Sam Lane see these teenaged powerhouses as threats, so they unleash their pet project, the Psycho Pirate, under the guidance of Hugo Strange, on the new heroes. Their plan was to use the Pirate’s ability to manipulate emotions and scare them out of being superheroes. It somewhat works for Claire/Gotham Girl, but Hank, for Gotham, it causes a complete psychological break. Gotham kills 28 members of Waller’s unit in the course of one night, and Batman, along with the other members of the Justice League, can barely keep him in check. Claire tells Batman that the powers they bought come with a cost – using them takes from your life, and the more you use them, the sooner you will die. Gotham Girl comes to the scene and fights her brother to the point of him dying from the strain.

In “I Am Suicide,” Batman decides that the best way to fix Claire from her distressed state at the hands of Psycho Pirate is to find the Pirate again to use his powers to revert her back. He makes a deal with Amanda Waller to find out that Strange made an offer to Bane and gave him Psycho Pirate in exchange for large quantities of Venom (the consequences of which is seen in the “Night of the Monster Men” cross-over between Batman, Detective Comics, and Nightwing). Bane wants Psycho Pirate to use him to ween himself off the use of Venom. Batman works with Amanda to create his own Suicide Squad to invade Bane’s fortress island of Santa Prisca to get Psycho Pirate from his possession. Batman chooses his squad from people within Arkham Asylum, including Arnold Wesker/The Ventriloquist and Scarface, Bronze Tiger, Punch and Jewelle, and Catwoman; the latter which we find out is in Arkham for seemingly killing 237 members of a terrorist cell who destroyed the orphanage she grew up in, a charge which Batman believes she’s taking the blame for someone else. Batman and his squad commit an Ocean’s 11 style heist to steal Psycho Pirate from Santa Prisca, and in doing so, enrages Bane to the point of falling back on Venom.

After the heist, when returning all the other prisoners back to Arkham, Batman let’s Catwoman stay for one more night. They banter, fight crime together, and at last, share the rest of the night together on one of the rooftops of Gotham. This is partly a ruse on Catwoman’s part, and she escapes from Batman’s clutch during this vulnerable moment. In trying to find her, Batman finds the location of Holly Robinson, one of Selina’s closest confidantes who she grew up with, and when he finds her, she nearly slices his throat and escapes. Catwoman finds Batman there, gets him back to the cave to heal his wounds, and tells him the truth: Holly Robinson used the skills that Catwoman taught her to kill those terrorists when they bombed their orphanage. Beliving that Holly would be killed if she were caught, Selina takes her place instead. Catwoman leaves the city, leaving Bruce alone.

That’s about everything I think is super-pertinent leading up to “I Am Bane.” Please don’t take this summary as an excuse to not read these issues eventually – there’s a lot of other really cool stuff I left out that are worth seeing for yourself.

Wow thank you so much @Jay_Kay!

No problem – I think I was just looking for an excuse to go over those two trades I have anyway.

This would be my second time reading this.

Batman would have been my choice for a restaurant but choosing someone different I probably would make a Martian Manhunter restaurant. With some fine mars themed meals and of course cookies.

I would say my stand out moment was the fight between bats and Bane. Just love to see a good knock down drag out brawl between the two.

This only enhanceed my opinion of Bane since he has always been my favorite villain in DC. I love it when they make Bane a mastermind. When he’s more than a brute.

These were one of the first few comics I read since I just started reading comics when this service came out and they are definitely worth a read in my opinion.

Thanks for stopping by! I’d be all in for some fine mars themed didning! Yum!

How about those flashback sequences?! It was then that I fell in love with this run.

I’ve heard people say that the flashbacks might have been too much and took up too much space. I can kind of get that, because it does take up pages that could help further tell the plot, but it provides a great contrast to Bane’s monologuing about how much he isn’t like Bruce or anyone in Gotham.

I enjoyed the flash backs. Made it feel more cinematic for me.

I can see that, @Jay_Kay. Tom King is very much a writer that focuses more on tone, rather than a lot of plot.

He’s very much a show over tell kinda writer, imo.

My favorite moment in this arc is the fight in Arkham where Bane fights every one of them.

3.) We had a lot of big moments in these issues, which one stood out the most?
My first favorite moment is Batman’s final defeat of Bane…the “I am Batman” moment. My second favorite moment is the conversation between Bruce and his mother…very touching.

4.) Did this book change your opinion of Bane?
Agree with NYJt3. This is now one of my favorite depictions of Bane. I like that his intelligence and fighting skills were both shown here. Think that he is always a challenging match for Batman because of all his skills.

I loved seeing him brute his way through Arkham.