Young Justice is back! (Again!)

To celebrate the return of the DC Universe Original Young Justice: Outsiders, DCUBC is going to be checking out Titans/Young Justice:Graduation Day!

Written by Judd Winick with art from Alé Garza and Lary Stucker.

Gear up for a roller coaster with this one, folks. It may be three issues, but this book packs a punch.

1.) Is this your first time reading Titans/Young Justice: Graduation Day?

2.) How would you compare the characters of this book to those in the Young Justice show?

3.) What do you think about the length of this book? Was it too short?

4.) Do you think Young Justice is to blame for the outcome of this story?

Feel free to also let us know what you thought of this week’s selection as a whole. I can’t wait to hear from you! 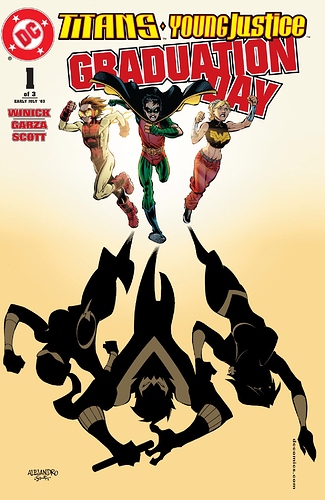 I have read Graduation Day, however it was years before the Young Justice TV series came about.

This will be fun to re-read and compare and contrast to certain character’s TV iterations.

speeds off to Reading Ville

Nice! I know it more by reputation, because fallout of this is addressed in Geoff Johns’ Teen Titans, but looking forward to reading this for myself.

Loved this! Just loved it. The writing was solid, Garza’s art was good and the moments that needed to land hard did indeed do so.

I wouldn’t be surprised if Weisman and company have been reading Young Justice, Titans, this mini, and the subsequent Teen Titans and Outsiders series that came forth from Graduation Day as one (the show) very much feels like the other (the aforementioned comics)

In the heat of some moments, they had to do so to simply defend themselves. In others however, it was more of a “Let’s go kick some ass team!” methodology minus an actual plan.

One of my favorite scenes was Metamorpho’s intro in #3. Loves me some Rex Mason!

I’m really tempted to revisit DC Special: The Return of Donna Troy and the Insiders crossover from Teen Titans and Outsiders. To me, they always felt like follow-ups to Graduation Day.

WhooHoo! Can’t wait to dig into this one and see what they’re up to this time =)

Wow, I actually just read this totally by coincidence

Woohoo! Glad you liked it! I really enjoyed the length of this one too. It didn’t feel bloated. Every page had a purpose.

It was really interesting seeing how both teams beat themselves up over how things went down. It’s one thing I liked about this one. The story felt like it had a lot of weight.

I might be wrong but I assumed Star Labs kept the Superman Robot without supes actually knowing about it? I might be totally wrong.

But you’re right. At the end of the day Supes should be responsible for his creations. Thanks for pointing that out!

It’s funny how that works out! What did you think about it?

1.) This is the first time I’ve read the mini series, and it seemed like a fitting conclusion to the titans story.

2.) Compared to Season 3 of the show, the members of Young Justice seem a lot more immature and less experienced than their tv counterparts.

3.) I think the length of the book was just about right, considering how quickly things happened, it would have been nice to set it up and see the friction between the two teams before thrusting them into battle.

4.) It seems that Young Justice(specifically Cassie) blames itself for Donna’s death. Reading it I believe Superboys restraint to engage the Android helped it ultimately kill Donna, But if the Titans would have worked with Young Justice better to stop it all of this could have been avoided. The Titans are supposed to be leaders for the younger heroes, but they ultimately failed when push came to shove.

Spent my lunch reading through this mini. I enjoyed it, thought it was good but not great. Nightwing came off too hotheaded and not the leader he normally is. I like that Star had protocols for super injuries or dealing with something of the threat level of a Superman robot. Feels like that’s how they would work. Was a little iffy on the art to start, but really came to like it.
This was a good example of how they over complicated Donna’s backstory. Even though it turned out to be a head fake the death still had an impact.

The original Young Justice run was the first comic series I read when I got DC Universe. I’ll have to go read this section again and discuss!

Wow… terrific as sweet to question 4 and something I have yet to think about.

Dick spends 3 Issues yelling at the YJ team but not actually leading them. You’re right. It should be the titans responsibility, they are the role models.

My only issue with this book is Dick is a little much here. I’m all for team leader Nightwing, but he was an unlikable jerk here.

And yep. Complicated Donna backstory in all its glory!

Thanks for reading along!

Looking forward to hearing what you think!

Agree Nightwing was off. Wondering if that’s the way he was generally portrayed at the time.

2.) How would you compare the characters of this book to those in the Young Justice show?
I think Impulse is the same in the book and the show. I agree with the other comments here that Dick did not seem like himself.

3.) What do you think about the length of this book? Was it too short?
I liked it. There was no “fluff”. Every moment mattered. This was a powerful punch of a story.

4.) Do you think Young Justice is to blame for the outcome of this story?
No. I think the Titans are to blame, specifically Lilith/Omen. Before she tried to touch Robot Supes, he was in a trance. After she tried to touch him all hell broke loose and they had to jump into reaction mode to try to contain / dismantle him. If Omen hadn’t tried to touch him, maybe they could’ve done more investigation (like contact the Superman for intel on his robots) and come up with a plan while Robot Supes was still in his trance.

Troia’s speech to Cassie in issue 2 was so inspirational (go Troia!). I was truly shocked by how things ended in issue 3. The ending was beautiful though. What a ride!

The attached moment made me chuckle. (expand the image)