This week at DCUBC, our journey through The Multiversity comes to its EPIC end!

Spoiler discussion begins NOW and lasts until Sunday. So make sure you drop by throughout the week so you don’t miss out on any discussion!

QUESTIONS OF THE WEEK:

Questions, Comments, Concerns? Feel free to reach out to me, JLWWSM, on Discord or via email at JLonDCU@gmail.com. 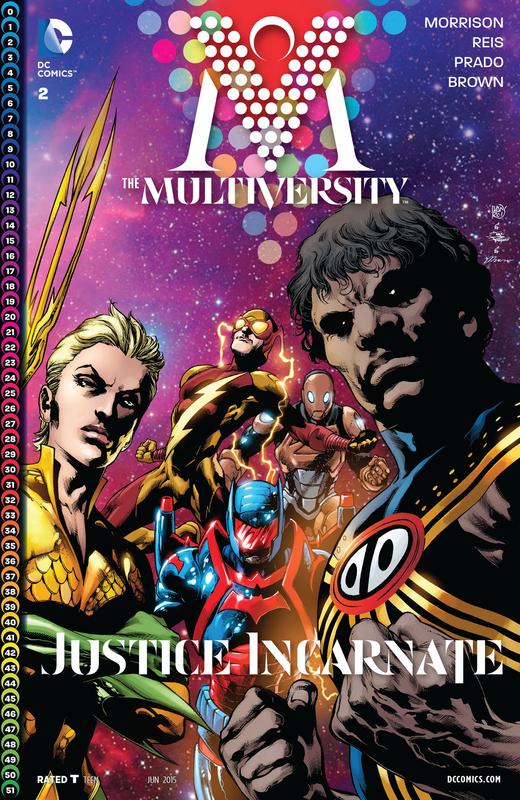 I’ll re-read these eventually, but LOBO?!

Feetal’s Gizz, the Main Man has arrived at the Book Club! To quote a line from a Lobo story I wrote “Hoohaw! What fun!”

I’ll still be here for this week, but next week I’ll be taking a break to read Detective Conics #1000!!!

I read all the one shots and issues and I’m afraid to say I didn’t have enough IQ points to understand it on the first read. So did I unleash a multiverse level threat?

@Don-el
Don’t worry, we will all join in and fight off the scary stuff together!

@Vroom
Glad to hear you’re excited - I am too

@FlashPoint0909
We’re glad to have you with us to finish out the series!

This series covers a lot of creative ground. I had trouble understanding some parts of it too, but when I was in doubt I just enjoyed the beautiful artwork.

The end is quite epic.

Ah Multiverstity an excellent alternative to what was coming out at the time and the even better sequel to Final Crisis.

“Ultra is aware! Ultra is alive!”

Doug Mahnke’s art is, as always, crisp and beautiful. I’ve never seen art that’s anything less than wonderful from him.

Early on, I enjoyed how the story seemed to be a brief treatise on comic book history. You’ve got Ultra lobbing a bad guy with a punch and saying “Take that buster!” in a seemingly Golden Age look at super heroics.

Two panels later, that’s juxtaposed against the image of Ultra holding an adversary, one whose insides seem to have been punched or ripped out by him. Our “hero” gives the reader the Ol’ Stink Eye and says “What are you looking at?”. To me, that captures the “grim n’ gritty” era of when super heroes were theoretically “cool” based on their level of beating villains to pulp (literally in some cases). Interesting stuff.

The Neighborhood Guard reminded me of Kirby’s Newsboy Legion, if for nothing else than its a group of street toughs protecting their turf. I liked Red Riding Hood. Too bad things didn’t work in Ultra’s favor when he was briefly with them.

Ultraa is interesting. The red hair, physique and black and yellow outfit reminds me of Monolith. Maxima is a fun character generally speaking, so it’s interesting to see a consort of her’s appear. Ultraa definitely could’ve found a better way to remove Ultra’s gem, because…ick, but Ultra ultimately did bring his gem eating opponent to his knees in defeat, so that’s good.

The Gentry is just creepy. I loved how Red Riding Hood saved Ultra.

All in all, a very good book. I’d only read Ultra Comics once before, and that was the week it came out, so this was a fun re-read. Love him (as I do) or not, you have to give Grant Morrison credit for thinking outside the box with his ideas.

You’ll excuse me…I’ve been told to report to a Quarantine Zone and to “put the comic down now”!

Correction: Ultraa reminds me of Mammoth, not Monolith. The Monolith is a totally different character.

I’m glad you enjoyed it. I’m completely with you on the icky factor of the jem removal! I literally said “ewwww” at that part.

Fun Fact: for anyone who likes the Hall of Heroes and the Justice League of Earth-13, they showed up in last week’s The Terrifics #14. I was pleasantly surprised to see them.

Oh really? I need to get caught up on The Terrifics.

The House of Heroes showed a while back during Rebirth in a Superman arc (pre Superman Reborn) and I got super hyped when that happened. 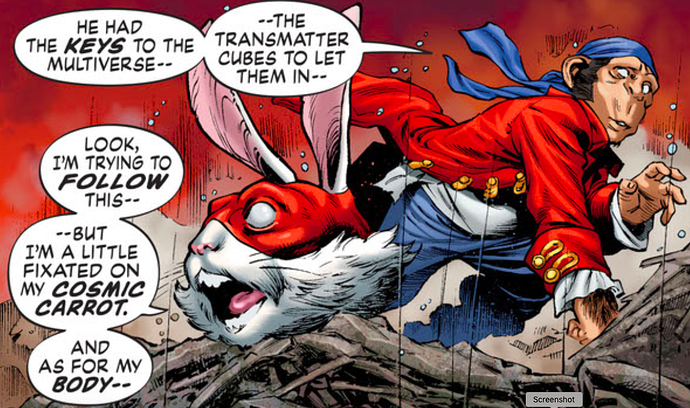 Thoughts on The Multiversity #2:

A solid finale with beautiful art by Ivan Reis. His art always surpasses my high expectations. I love Harbinger in general, so I was pleased with her role in the series and how she appeared.

“He’s a rhymer! In God’s wholy name, a rhymer!” I’m a huge fan of The Demon/Etrigan, so I loved the rhymey bits and the Earth-13 iteration of him as Super Demon. Fun stuff!

Dr. Sivana was a nice sight, given his impending cinematic debut and the fact that he’s fun in general. I LOVED the entrance Mary, Shazam and Freddy make! One of two “YEAH!!!” moments in this issue.

The Earth-18 Justice League (I think they’re a JL) was a great sight to behold. Is that Batlash saying “Yeee-Hawww!”? The mechanical horses are slick and well designed. The fellah in the bison mask looks familiar but I can’t place him ATM.

Hellmachine looks like something out of Sid and Marty Kroft’s worst nightmare. Yeesh!

Captain Carrot stole all of his scenes! Eat your carrots kids! He was wonderful as was the Earth-23 Superman (one of my favorite alternate takes on Supes).

Nix Uotan was thunderous in his power and the energy of it. I imagined his voice being equally powerful and bone rattling.

Aquawoman and Thunderer had some nice moments in the spotlight. Especially in Aquawoman’s case when she stabbed Nix in his right eye. New 52 Aquaman would be proud and raise his trident in her honor.

Red Racer was another scene stealer. From his rapid comic reading prowess to how he circled the planet six times a second, he truly was a wonder.

My favorite Red Racer moment was as follows:

“Then, by the lightning strike and by searing rainbows I was blinded. And blinded, I witnessed.” then BOOM! Red Racer ROARS in with a cadre of assorted speedsters behind him!

I love these types of moments where something wonderfully jaw dropping occurs that makes you mentally or verbally shout “YEAH!!!” (the aforementioned scene was my second of those moments BTW). I spotted New 52 Earth-2 Flash, regular Flash and what appeared to be the Bart Allen Kid Flash amongst Red Racer’s army. Loved this scene!

The Gentry were suitably creepy as always.

The bottom of page 36 showcased alot of cool characters. I liked the alternate Atom Smasher and it looks like Mr. Majestic was in the lower right side of the image. I assume it’s a different character, but the colors of that character’s uniform (as well as his hair) reminded me of Majestros.

I was surprised to see Bloodwynd pop up. I remember Morrison stating somewhere that he hated the character and thought his name equated to “rather messy flatulence in the wind” (a paraphrasing of his words). I like him, so I was glad to see him pop up here.

The giant feller on the throne. Did he pop up in any post-Multiversity titles? I feel like I’d remember if he or his ilk did, but I’m drawing a blank.

The scene on page 44 of the assembled heroes at the Hall of Heroes was nicely drawn with coloring that really popped. It reminded me of the scenes of assembled characters in COIE, and I’m sure that was by design.

Page 46 is a beaut, just absolutely stunning! I would love to have a poster of that art!

Great issue! Re-reading what I did of The Multiversity was alot of fun. This is a series that perfectly exemplifies the no-holds barred imagination that the comic book medium is so wonderfully adept at bringing to life/capturing.

If anyone wants more of the Hall of Heroes and some of the characters in this issue, check out:

“Until next time, remember the name Operation Justice Incarnate!”

Finished Ultra last night. Crazy book. I just love how meta and self reflective Morrison is with it. He’s not afraid to poke fun at himself. He does that with a lot of his work, but it’s really good here.

Also the coloring in this issue was just stellar.