I haven’t finished this week’s book. Hopefully I’ll wrap it up and join the discussion tomorrow! Been slammed at work.

Just finished it, and it’s overall a great comic. The highlights for me are the art and characters. Gleason creates amazing pages full of clear, dynamic action and great emotion. Damian sounds about pitch-perfect, and Maya and Goliath are great additions to his supporting cast. I also appreciate Gleason not only bringing Talia back, but also putting her back to her more morally grey self – while Morrison created one of the best Batman runs ever, making her a straight villain was one I never agreed with.

The critiques I have are relatively mild. Gleason is fairly new as a writer and it shows. He’s great at character, but his dialogue and plotting feel sloppy at times.

Still, I really enjoyed rereading it and since I dropped off after Robin War, I’m definitely going to finish up. I just wish the last issue was on here.

I’m looking forward to reading this on autoplay Roku later this weekend , after some Christmas shopping ;keep a light on for me please!

Prior to reading this, the only thing I knew about Damian was that he was Talia and Batman’s son, he’s a troublesome kid, and I read a few issues of Super Sons. The colorful art was awesome. I liked when the story reminded us he’s a kid, like the tooth falling out part. Or the mercy he showed to baby Goliath.

As for Damian’s personality, I can’t decide if I like him or not - at least not yet. I see him as a kid that was raised in a cult to be a heartless leader of a group of assassins. Given his circumstances, I can’t really blame him for his personality issues. I need to read more of his comics. I plan to watch Son of Batman too.

I felt lost in the story for the first couple of issues. The 6th issue felt rushed to me. I didn’t understand the girl’s backstory or her mask, or why Damian killed her father. After I re-read the first few issues, the story made a bit more sense to me.

After the first six issues I have more questions than answers: What is his relationship with Batman? How did Batman find out about him? Is the blood year finished? How does Talia fit into the picture now? I will finish the rest of the series because I want to know more.

Overall, it’s a cool introduction to the character. If definitely shows what life was like for Damian when he was with his mother and the League of assassins.

It was awesome. I really love the character of Goliath. The story was brilliant and Damien isn’t my favorite robin but this story helped me enjoy that character even more. So much I reading on the rest of the issues.

Like many I’m sure the real holiday of this was Goliath. Seeing him as a baby was awesome.

I like this book but don’t love it. The art is incredible but I feel like it’s not given any room to breath with all of the exposition that takes up most of the page.

It’s a great character study for Damian though. I love that boy. Seeing him find redemption is really cool.

My questions are mostly similar. Hopefully I’ll find time to finish the rest of the series!

What did everyone think of Nobody?

Nobody is the daughter of an assassin, but in her heart, she’s not a killer. I don’t think she ever really wanted to kill Damian, even though he killed her father. She doesn’t strike me as the naturally violent type.

Before I share my thoughts on the first two issues, @JLWWSM , you asked about Damian’s relationship with the Batman: he is his real flesh and blood son. The story of Bruce Wayne falling in love with Talia, daughter of the Demon Ra’s Al Ghul, is in a 1980’s hardcover graphic novel, Batman: Son of the Demon, by Mike W. Barr (who also wrote Batman and the Outsiders at the time, as I recall). It was at the time considered like an Elseworld’s tale, non-canon, until 2006 when Grant Morrison ran with it! Batman: Son of the Demon

Batman: Son of the Demon is a 1987 graphic novel by writer Mike W. Barr and artist Jerry Bingham, published by DC Comics. It was released in both hardcover and softcover formats. Although it was deemed to be non-canon, Grant Morrison used this story in the 4-issue story "Batman and Son" in 2006. DC Comics published a new printing of Batman: Son of the Demon in 2006 featuring new cover art by Andy Kubert for the first time in standard comic book size with a cover price of $5.99 US, tying in wit... 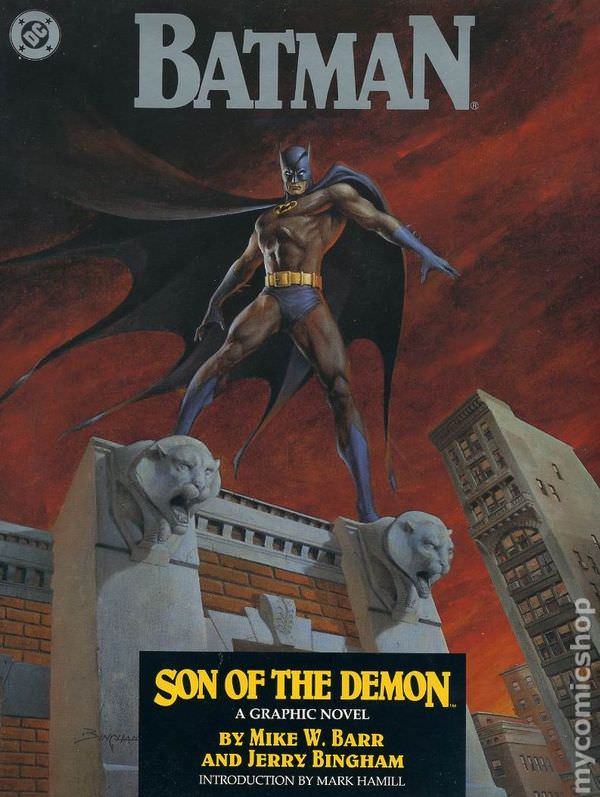 So, Robin: Son of Batman #1: the very very first impression I get is: this artist is heavily influenced by Jack Kirby and probably Keith Giffen, both styles of which I am a big fan! I have no idea where Goliath came from, but overall it fits the story logic of Damian’s childhood before Bruce Wayne reentered the picture. This kid is royalty, a prince really, pampered while also early-on given “the weight of the crown.” So in the fantastic world of DC Superman Batman Wonder Woman, a pet giant bear bat that is also a pet can make sense for Damian.

Ra’s Al Ghul obviously believes that combining his genetics with Batman’s via his daughter would produce the ultimate warrior. And so Damian ended up with this severe and violent childhood. Sadly, this reminds me of the 10 and 11 year old boys who are trained to use machine guns and knives for combat in small unstable countries that no one seems to care about.

Issue #2: The idea of trying to undo whatever happened during Damian’s Year of Blood initiation into the League of Assassins is intriguing. I’ve never personally gone through a 12 step program where two of the steps involve making a list of who you harmed, then actively seeking out everyone that your out of control life harmed to try to make it what you did right. "Step Eight: Made a list of all persons we had harmed, and became willing to make amends to them all. Step Nine: Made direct amends to such people wherever possible, except when to do so would injure them or others. " An example would be if someone borrowed $20 but then never paid it back, when going through steps 8 and 9, you cough up the $20 to the person you borrowed it from.

Damian’s spontaneous desire to meticulously do this as best he can for whoever he harmed during the Year of Blood seems modeled after this idea.

Having the daughter of Nobody take on his identity and then seek out Damian follows a different emotional logic. The captivating hook here is that both of these characters are the children of people ostracized by the world as villians. I look forward to seeing the differences in how the two of them work this out in their vision of who they want to become.

It’s the most violent 12 step program ever!

My plan is to finish the other three issues today.

Part of the fun of this weekly book club is digging in on writers and artists that I wasn’t that familiar with before (and characters ). Concerning the writer artist Patrick Gleason, he is currently doing some very similar work portraying a super kid in Action Comics, and recently Super Sons around issues 11 etc.

Issue #3: As I hoped, P Gleason is honing in on the differences and also the similarities between the new Nobody and Damian concerning their similar “evil” parent heritage. I agree, the baby tooth flying was hilarious, and seems to be part of what helped Ms. Nobody lighten up with Damian.

More on the art of Patrick Gleason: I believe I see a Paul Pope influence as well, which is considered a Japanese Manga style: look at first this panel he drew of Talia this issue as she “wakes up.” 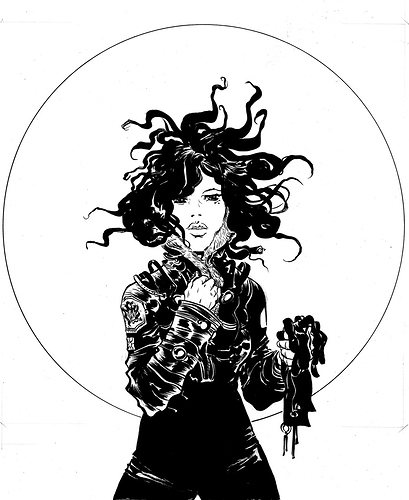