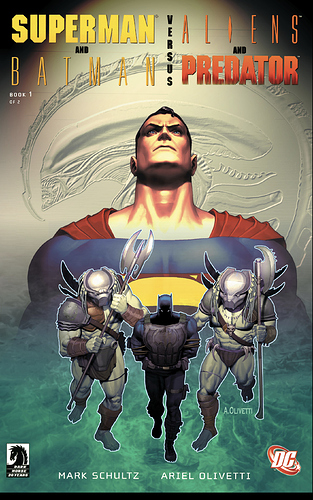 It’s the battle you’ve been waiting for in a thrilling 2-issue miniseries by Mark Schultz, with computer-generated painted art by Ariel Olivetti (SPACE GHOST)!They’re back! The relentless killing machines known as Aliens and the unstoppable race of hunters called Predators have returned to Earth. But saying “they’re back” isn’t quite accurate—Batman discovers that the two races, sealed away from the human population, have been here all along! Can he and Superman get them off our world before they threaten the planet’s existence? Co-published with Dark Horse Comics.

Welcome back to another week of DCUBC. I hope you are all staying safe!

You know what time it is? Time for another fun cross over! This week at DCUBC we are checking out Superman and Batman Vs Aliens and Predator! This is a battle you’re not going to want to miss!

I VAGUELY remember reading this from a library back when I was a teen, but not much of it. Should be fun to look at again – especially since it’s a question mark if it’ll stay on the service since Disney/Marvel technically owns Aliens and Predator now.

Have not read this. I’m a fan of all genres.

I recently watched Aliens Vs Predator, I’m really looking forward to reading this!

Looking forward to hear what you all think!

I really liked this story. First time reading. The meshing together of two different genres is a good way to explore each away of its own context. I see these two books as an exercise to understand Batman and Superman as while not more in depth, but more to solidify each of their characters and philosophies without being set within there normal surroundings.
For example; Batman, the detective, the ever prepared, knowing that he would be tracking down the hunters, but all the while knowing that the horrors were also going to be a part of this. The way he can read a situation well enough to take a gamble to gain leverage among his captors is classic Batman.
In the same sense a reader should be able to grasp that Superman always tries to do what is right, for all parties concerned. Not just for the Predators or Aliens, but for the humans, in this case the TDI. He wants to work for the betterment of all things, unless, somehow Lois is involved and its off to the races to save her. There is even a thorough look at how the Fortress of Solitude works/exist.
It may not be an all revealing look at the characters but for both there are instances throughout this story where the reader can see the true essence of each.
I liked the artwork. It had a very ‘Kingdom Come’ feel to it, for me. Favorite panel was chosen because I could not shake the Star Wars imagery from my head. Maybe it was Fortress of Solitude looking like the death star, the android, Kelex, or the desolate background to the characters.

Is this your first time reading Superman and Batman Vs Aliens and Predator?

What were your expectations prior to reading?

My expectations were hoping to see the Aliens and Predators showing why they have been around since the late 70’s and why people still enjoy watching the films today. I also was hoping to see how Batman and Superman worked together to defeat both of these foes.

What did you think of the art in this book? 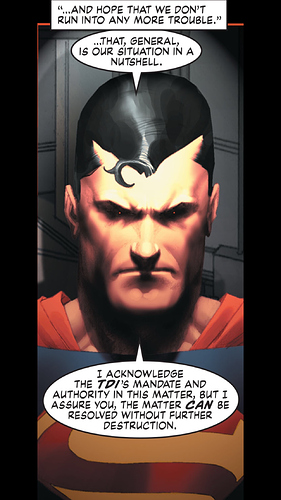 The background scenes were impressive and realistic due to the computer generated art style used in this series.

What was your favorite Page or Panel? 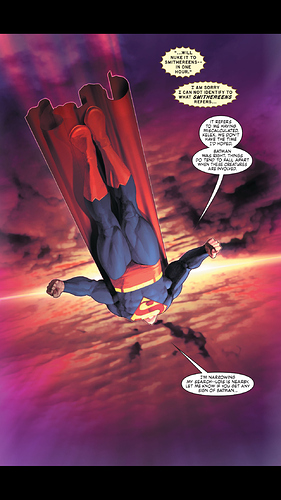 due to the great art work display on this page.

The meshing together of two different genres is a good way to explore each away of its own context.

I loved how they didn’t shy away from gore in this book. It made the connection feel more natural imo.

I liked the artwork. It had a very ‘Kingdom Come’ feel to it,

Yes! It feels very Alex Ross like to me. Loved it!

due to the great art work display on this page.

I LOVE THIS PAGE! You can get such a good sense of speed, while retaining an excellent level of detail on supes. Great pick!

Honestly, they were a little low, which is for the best, because I think the story just about makes it there.

The stakes are interesting, though I think something is a little lost when Batman and Superman both already know who the Predators and Xenomorphs are. I can appreciate the nods to continuity, but I think part of the fun of these kind of weird team-up/fight crossovers is that initial “WTF” moment and our heroes trying to scramble to figure out how to beat it. With them being a known entity, you can take the Predators and Xenomorphs out completely and replace them with, say…the Khund and the Durlans and you’d have pretty much the exact same story.

(As an aside, anyone else find it odd that Superman kept referring to the Xenomorphs as “aliens?” I get that’s the franchise name and they want to keep it easy for the kiddies who read this, but it just doesn’t make sense that in a universe teeming with life outside of humans, they’re the only species referred to as “aliens.”)

One thing that I didn’t expect going in was Lois Lane being part of it. I thought that was pretty cool…at first. Sadly, she doesn’t really get used much in the story. As I was reading, I was hoping that she would basically be this story’s Ripley – maybe even have something where the Xenomorph Queen has our heroes pinned and Lois comes out in some alien power armor screaming “Get away from them you b***h!” Sadly, nothing that cool. If anything, she is basically demoted to Batman’s sidekick for the story.

But, stuff like that aside, it’s a decent story overall.

It’s solid, though awkward in places. At times it looks kind of plastic and weird, though I think it almost works in its favor since really the whole endeavor feels like a kid playing with his action figures.

One thing that I didn’t expect going in was Lois Lane being part of it. I thought that was pretty cool…at first. Sadly, she doesn’t really get used much in the story.

Didn’t even think about the ripely angle they could have taken. Now that you mention it, that is a bit of a missed opportunity.

I can appreciate the nods to continuity, but I think part of the fun of these kind of weird team-up/fight crossovers is that initial “WTF” moment and our heroes trying to scramble to figure out how to beat it.

I get this. Although I appreciate that’s it’s not bogged down with initial detective work. Straight to the action.