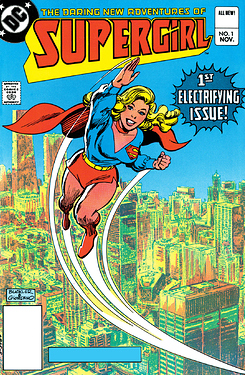 ”Supergirl, as Linda Danvers, moves to Chicago to begin a new life as a student at Lake Shore University. She gets a new home there and makes new friends and also meets a new villain in “A Very Strange and Special Girl.”

HOW TO JOIN THE FUN!

• Reply your answers to the discussion questions, share your thoughts about the story, or both!

• Have fun discussing the book with the community. All are welcome to join, just jump right in!

We’d love to hear your general reactions to and thoughts about the story.

Questions? Concerns? Feel free to send me a direct message.

Looking forward to reading this!

Haven’t read any of this, looking forward to seeing some of this take on Kara before…well, you know.

Reading this before, “well, you know”, is such a treat! It makes reading the Crisis a richer experience. I read all 23 issues of this series, I couldn’t stop reading.

Reading this before, “well, you know”, is such a treat! It makes reading the Crisis a richer experience. I read all 23 issues of this series, I couldn’t stop reading.

I love it when I get so wrapped up in reading something that I can’t stop and from the sound of things this one is that sort of book.

I’ve read this before, but it was a long, long time ago. I remember it being one of the lesser Supergirl books, but maybe this re-read will change my mind. I’m looking forward to revisiting it.

While not part of this week’s reading, this is my favorite issue of the series (that movie logo just shines!): 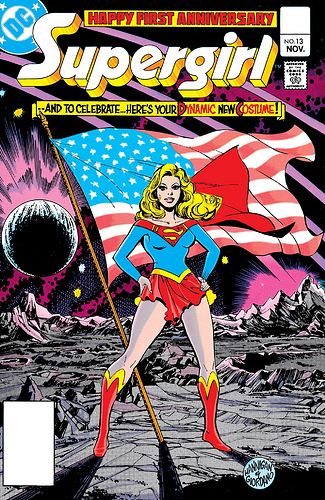 I’ll be listening to the Supergirl movie soundtrack while reading. Here’s a couple pieces for anyone else who’s inclined to do the same:

I have not read this era Supergirl before as we would have to get closer to COIE before I was back into comics. While the fight scenes are sorta pedestrian, Linda’s everyday adventures do stand out. @DeSade-acolyte had made a point in defending Romance comics in the DC History Club Vote and Defend that these “girl” comics led directly to the depiction of female heroes in comics. Although Supergirl precedes the demise Romance, you can definitely see their impact on the comic’s depiction of Linda’s life. It feels like an updated version of one of these books.
Kara punches bad guys and girls in these issues but Joan Raymond is her most memorable encounter. 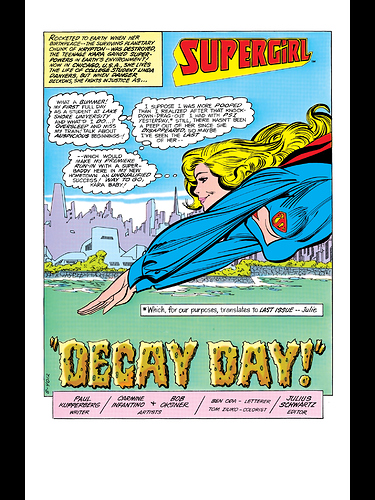 I forgot that Carmine Infantino did artwork for this series. When you read about books he worked on, TDAS doesn’t seem to be one that comes up too often, and that’s a pity. I’ve read #'s 1 and 2 so far, and the art was very good.

Joan is a force to be reckoned with

This was my first read of Supergirl in that era too. I mentally tried to dial back the clock in my mind and look it through a 1982 mindset. I thought Linda was a really sweet character and also tough as steel.

That’s cool about the connection to your history discussion.

Thanks for reading and sharing!

I was perusing Best of DC Blue Ribbon Digests on eBay, and came across this, which in turn reminded me of this week’s reading. 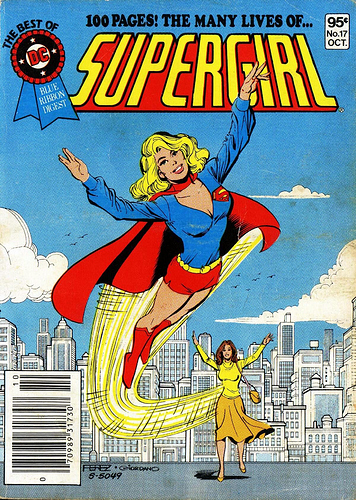 Have you read the watchtower announcement or the DCU News?

This week’s discussion is part of the #crisis-on-infinite-clubs event! Be sure to check out clubs over the next weeks as the red skies impact us all!

Is this your first time reading The Daring New Adventures of Supergirl?

Yes – overall, I thought these three issues were…okay. The story we got around Psi and Pentaghast/Decay had potential, but unless they come back, it came out sort of flat. Like, I was hoping that there really was some sort of spirit of Decay, and that Pentaghast was either fighting against in the worst possible way, or was an unwitting servant to it, and I hoped Psi would join with Supergirl to help defeat it.

I kind of hate going this route, because I know I should say something more about the book itself rather than the story I wanted it to be, but there just isn’t really a lot here to talk about, sadly.

In this story, mostly everybody loves Linda. Has she charmed you as well? What do you think of this version of Supergirl?

She’s…also okay. I mean, she’s a nice girl with the good, solid moral code of any proper superhero, but…the issue really doesn’t show a lot of what makes her unique. She just feels very generic in these issues. Again, maybe this changes in this series as she becomes more situated in Chicago – maybe her neighbors will notice, take the personality and quirkinesses that are exploding out of themselves and let the poor malnourished girl have some.

(Also, can one of them seriously upgrade her civilian wardrobe? I get she has to conceal her superhero outfit, but that doesn’t mean she has to dress like a school marm from Little House on the Praire.)

What do you think of Linda’s neighbors overall?

I kind of get the feeling that the guy who wrote this had a failed pilot to a college based sitcom and twisted it into this Supergirl comic. They were undoubtedly the most interesting thing about all three issues, though they still felt a little annoying.

I do wonder, though, was John Ostrander working in DC at the time? Because if he wasn’t, the fact that one of the neighbors and possible love interest for Supergirl is named after the future, iconic Suicide Squad writers is one hell of a weird coincidence.

What was the standout moment or panel to you?

Honestly? I’m kind of drawing a blank. I feel bad, because I don’t feel like anything in this book is truly BAD, I see a lot of potential here, but none of it really stood out either. I just keep coming back to the words “standard,” and “servicable.” Part of me wants to keep reading, just to see if it actually improves – or at least get to see the story of her costume change to the one we see in COIE.

That’s all fair criticism. I kept reading the whole series because I wanted to see where the story went.

The start to this series is not as strong as other stories I’ve read, but most of the characters we meet in the beginning of the series play a much larger role as the series continues.

They were undoubtedly the most interesting thing about all three issues, though they still felt a little annoying.

Reading 1-3 with my 2019 eyes, the neighbors freaked me out and I didn’t trust any of them

When they moved her in and unpacked her stuff while she was gone, I thought something sinister was happening. It took me reading the full series to learn if they were villains or not. (If you wanna know, just let me know and I’ll tell ya.)

The costume change is in issue 13, but I recommend reading 7-12 first to understand how it came to be. (The Doom Patrol makes an appearance and they are pretty funny.)

For better or for worse this version of Supergirl is heading to the Crisis! Crisis on Infinite Earths spoiler: After reading all 23 issues in the series, I’m probably gonna lose it

One thing I think the full series does well is to show how she puts others needs over her own, time and time again. And that character trait carries into Crisis on Infinite Earths.

Thank you for reading along and sharing your candid thoughts about the story!