Greetings DCU and thanks for stopping by!

“Clad in the Hebrew colors of war, former West Point Academy cadet Kate Kane is Batman’s cousin, but she fights a battle all her own against injustice.” - Batwoman

In Batwoman: The Many Arms of Death, Kate Kane’s present and past intersect while on a mission to track a deadly bioweapon.

Our spoiler discussion begins now and ends at the end of the day on Sunday, October 6th! 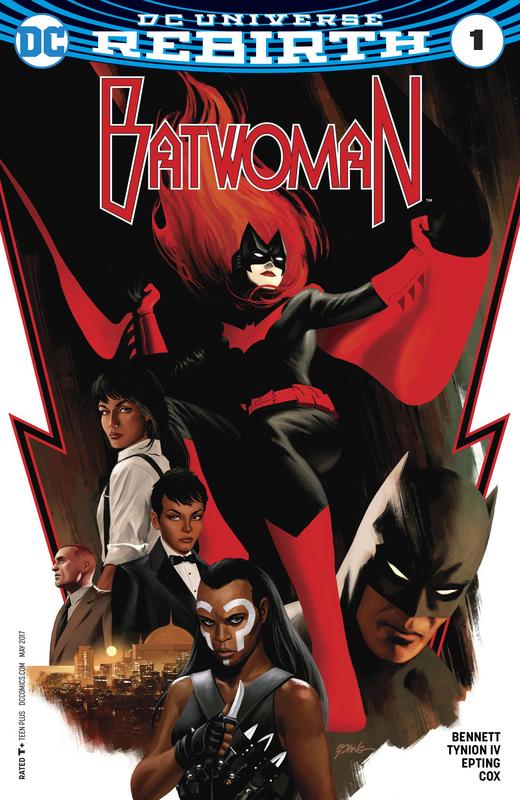 Are we not reading Batwoman Rebirth #1 as well?

Hi Nathan! Great question. Rebirth 1 is optional. The discussion is for 1-4.

Awesome and right before Batwoman the series on the CW

This is great, I’ll definitely jump on this one! It is my solemn duty

If anyone hasn’t read Kate’s earlier stories, namely and specifically Elegy, which a lot of the first seasons of the CW show will be based on, I cannot recommend that higher. To me, it’s pretty much the best DC comic book run.

@Mae
Welcome! I’m stoked to hear your thoughts and recommendations on Batwoman =)

@mae,
What year & issue is the Elegy story start?
If I like or don’t like the 2017 series, I might want to try something more or else.

Elegy starts in Detective Comics (1937) 854 and runs through 863, I believe. Part of the same creative team worked on the initial run of Batwoman (2011), and I’d argue they work great as one continuous three-year long story. Williams’ art is excellent. High recommendation.

I didn’t care for the next writer to start working on Batwoman (2011) after Williams. He was just meh. Sadly, that’s my feelings on Batwoman (2017) as well though I haven’t read he entire runs, so maybe it improves.

I did read these issues and found them underwhelming. Thoroughly, “Meh,” in my book.

Oh, I enjoyed Batwoman as a team leader in Detective Comics (2016) as well.

I skimmed through those issues again to try to remember why I didn’t enjoy it more. I think it’s a mix between not getting characters motivations and just plain disagreeing with them.

Again, I didn’t read the whole thing just now, so I might be missing relevant info, but I didn’t really get why Kate felt drawn to this group of criminals in the first place other than that their leader was hot. I do get that Kate was in a dark place, but that doesn’t explain why she later felt the need to save the criminal empire. It just didn’t resonate with me.

The story also poses the question early on what can Batwoman do that Batman can’t, and the answer later seems to be, “Team up with murderers,” which doesn’t seem right to me. I haven’t previously seen anything in Kate’s character that would speak to this.

Also, I didn’t like Knife. The name is lame. Her design is lame. For some reason, I just didn’t buy her as a legit threat. I kept expecting Kate to put her down hard, but they made her seem her equal in fighting prowess.

I will say that beyond her apparent affinity for gangs, Kate’s voice sounds right. Thought the artist is know JH Williams III, it’s still good quality work and it seemed he was trying to be a little outside the box with his layouts carrying on a little of Williams tradition on the character. I enjoy the spying of Alfred’s daughter (her name escapes me at the moment) since that added a little intrigue.

I don’t think the story is bad overall, but I just wasn’t feeling several decisions. Perhaps most critically, I didn’t feel this series gave Batwoman a clear purpose. Her original run was an origin confronting her past and forging her path as a hero. The original New 52 run made her a supernatural killer. This makes her…a roaming detective who takes apart criminal empires while looking for an evil ex-girlfriend who will probably be revealed as the leader of the evil criminal empire. Again, meh.

Elegy was actually just added to the main Comics section as a splash page, in anticipation of this Sunday’s Batwoman premiere on the CW!

But this is about the new 2017 series and I’ll be delving into it shortly, and I can’t wait to talk about it. @BatWatch, I’m sorry the story didn’t click with you

That’s alright. You are clearly a big Batwoman fan. How would you rank the different Batwoman run?

@BatWatch
Hi! Thanks for sharing your detailed thoughts on the issues. I love hearing reflections on the book.

Without spoiling the series, I’ll say this first arc (#1-4) sets the stage for the rest of the storyline which ends at issue 18. My take on this series as a whole is that Kate is on a journey to face the demons and decisions of her past, as well as face some drama with her family. In issues 17 and 18 she is able to reflect on her past and grow from it.

@Mae’s recommendation of the Elegy is a really good one. Thanks @Mae!

I love that in the flashback scenes, the colors are all gray and only very specific details (like her hair) are red. 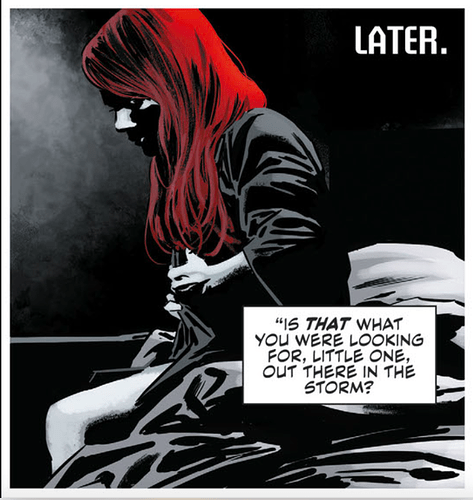 Maybe it all pays off in the end. I didn’t hate it and wouldn’t mind returning to it some day. I like the premise of Kate facing her own demons. I guess her being close to a gang of criminals wasn’t what I would have envisioned for her, and again this may be from the fact I haven’t read it recently, but I don’t really get what made her like the gang leader in the first place other than that she was pretty and liked Kate, but this kind of makes Kate arm candy which doesn’t sit right with me.

I look forward to hearing other people’s perspective.