. In White Carnival, Raven takes a break from the team, goes to high school and deals with new evils.

“…Reserved, distant and secretive, Raven’s never quite sure how close to let anyone get, or how much she can trust herself to maintain control…” - Raven

Our spoiler discussion begins now and ends at the end of the day on Sunday, August 25th! 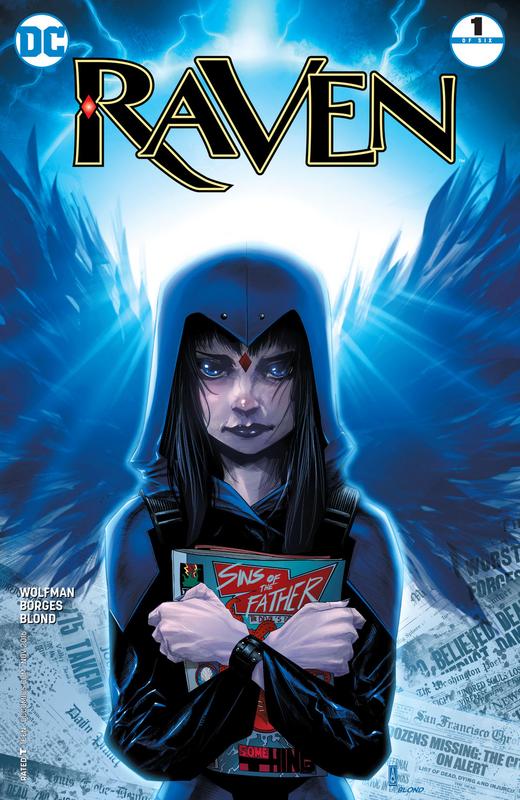 Neat! Read through the first issue so far, like the idea of Raven being in normal high school with this conservative Christian family.

Hi @Jay_Kay
The daughter of Trigon living with a devoted Christian family is a dynamic I so enjoyed throughout these issues. Can’t wait to till you get to the end to see how it all pans out. Glad you enjoyed issue 1. Happy reading!

@MattMcDonald
Hi! I enjoyed seeing all the ways Raven uses her powers in high school.

My favorite so far was her using her powers to tap into the mean girls’ worst fear, and all of them were afraid of being knocked up.

Just finished it – I liked how Wolfman combined the classic comic book version of Raven that he wrote for years, with the varied, more modern versions we’ve seen in recent years. I also liked her extended family and friends (some of their dialogue along with Rachel’s feeling a little try-hard “how do you do, fellow kids” but I’ve seen way worse), but I felt it had a really thin and not really satisfying plot.

The White Carnival is a creepy idea, but I found it very unsatisfying that we don’t really get any answers as to what it is. What was even more frustrating was them hitting the reset button at the end – like, I could get not wanting all her friends to know she’s Raven, but taking that away from her family basically takes away a lot of the growth that Rachel has with her family and I think kind of makes the story feel completely pointless.

“What animated show or movie features your favorite version of Raven?”

I think her most iconic take in other media was probably her in the Teen Titans animated series – I didn’t full on love the show as much as others, but Raven and the episodes focused on her were always a highlight for me. I also vaguely remember liking her in the recent New 52-verse animated movies, but it’s been a while since I’ve seen them.

Also, let’s not forget the version of Raven in the Titans series here on DCU, I think she’s been doing a great job with the role.

“Did you learn anything new about Rachel or her powers? If you did, what did you learn?”

One thing that’s done differently is how she handles the White Carnival at the end. In the past, we’ve seen her use her abilities to take away people’s pain, both physically and mentally and hold it in herself. At her darkest, we’ve seen her use that power to insert fear into her enemies when she was most feeling her father’s influence. But I think this is the first time she’s taken positive emotions like hope and faith, and amplified it in others, that I felt was a pretty cool moment and great growh for her both in character and power-set.

JLWWSM, read this back when we “only” had 2,000 comics to choose from. I liked how the family dynamics didn’t turn into “we reject you evil child” trope. Her family didn’t love what her powers represent but hey love her.
As for favorite Raven, I’ll duck the animated versions in favor of the Wolfman/Perez classic version long, lean, older, deeply troubled by her past and the threat she and her father represent. But, the modern cartoon inspired version is probably more sustainable as a character and certainly funnier on tv. Worst Raven, or at least worst Raven costume is the bird feather cloak. Just, no.

@Jay_Kay
The end scene with all the positive emotions (strength, faith, love, hope, determination…) was powerful to me. I loved her family being there to love and support her. I think Teagan Croft is doing a great job. I can’t wait to see her character arc in Season 2.

I thought the attached scene was funny.
The mom tells the kids , “…Just don’t watch the news [I assume on the TV] or go on your computers…”

Then we see the kids watching it on their phones. Ha! The kids found the loophole. 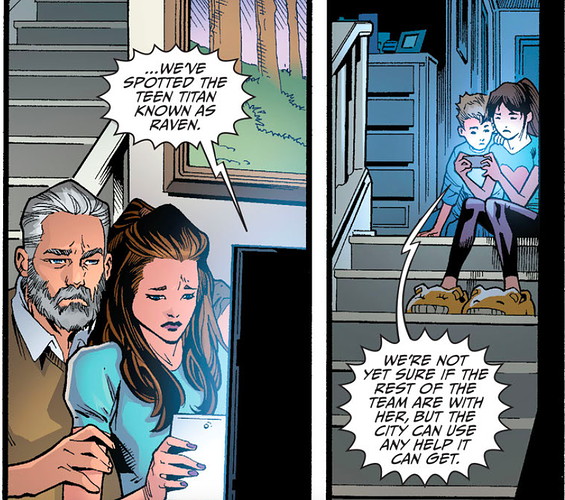 @msgtv
Hello! =) Having “only” 2,000 comics on the service feels like a lifetime ago

! DCU gave us an amazing treat with all the new comics we have now. The family really stands out to me in this issue - they love her unconditionally. I so enjoyed them in the story.

@msgtv – I actually liked the feather costume, especially the face mask – I thought it worked well for her early on, when she was in Trigon’s thrall, works well for a Raven who’s more on the side of devils than of angels. I like how they sort of compromised that and made that costume into a manifestation of her soul-self.

This scene made me chuckle too. 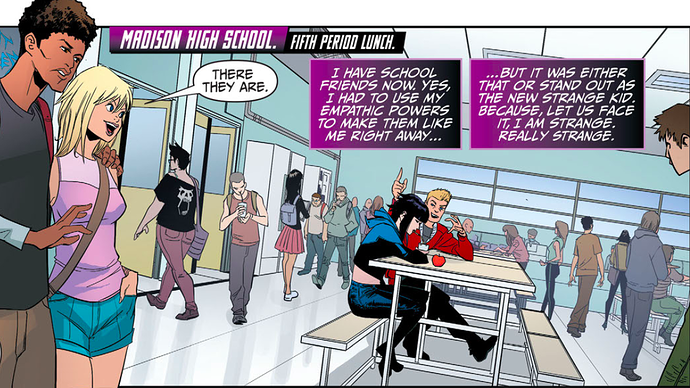 Have you read the DCU news?

I can’t wait to see how she embraces her powers in Titans Season 2.

Our book club discussion for Raven (2016-) Issues 1-6 is open through Sunday evening!

Another book club in the bag. This was my first time reading Raven White Carnival. I think my favorite Raven is the Raven in the Teen Titans animated series but the Raven in Titans here on DCU will probably be a favorite. The one thing I learned about Raven’s powers was that she can use her empathic powers to easily make new friends. Not sure if they ever mentioned this before but i could see how this would come in handy in a new school. My favorite moment was when Raven fought together to destroy “the thing” as she called it. This moment showed real growth and knowledge that she might not have be able to defeat it on her own. The one thing that bothered me about this story was that it left more questions than answers at the end. Such as will her family and friends ever find out who she is again and where did the thing come from and will we ever see it again. Over all a decent read-a-long.

This is my third timereading
Raven (2016-) White Carnival?

I read each issue as they came out.

A second time when I was trying to figure out what her power set was, because she is one of the nine characters in my New Justice storylines that appear occasionally in the Fan Creation Weekly Prompt.

On animated TV show Teen Titans Raven is too poweful.

I liked her family and her being in high school.

I didn’t understand her powers. In New Teen Titans she was an empath a healer and could teleport. But soon she made Wally love her which is mind control.

Now she can not only feel emtions, hear them and make others feel violent emotions. Her old costume was awful.

I didn’t see the rest of the power set. She teleported involuntarily.

Her Raven soul was better presented in the next mini series. But otherwise it was a failure.

I liked Raven trying to fit in at home and at school. That she considers Gar a friend not an annoyance.

Enjoying the read so far! I’ll chime in when I finish the last two issues. I’ll each what some have said. It’s really cool to see Raven in this high school setting. Just trying to find her way

@Lecouch84
Hi there and welcome back! Using her powers to quickly make friends is quite practical - particularly in high school

. That was a fun moment in the story - I never considered she could use her powers in that way.

The origin and next destination of the thing absolutely left a lot of unanswered questions. I was hoping it would show up in a different storyline and become an even bigger thing (I’m not sure if it did or not). I, too, wish the story gave more answers for the mysterious thing.