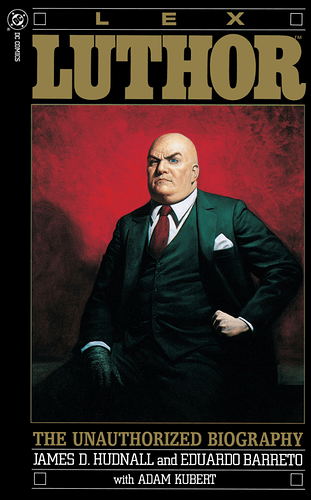 He’s arguably one of the most influential men in America today. He’s inarguably the evilest. His name is Lex Luthor…and whatever Luthor wants, Luthor gets—even if it’s the life of a man who threatens his privacy. But it’s Clark Kent who’s arrested for the brutal murder of down-and-out biographer Peter Sands, a man who hoped to climb back to the top with THE UNAUTHORIZED BIOGRAPHY OF LEX LUTHOR. All it got him was dead. What are the secrets of his past that Luthor is willing to kill for…secrets that the merciless criminal mastermind wants kept dead and buried?

This week here at DCUBC we are diving into the mind of a mad man. That’s right, we are taking a look at Superman’s number one foe, Lex Luthor. Lex Luthor: The Unauthorized Biography gives us a closer look at Lex, and some other surprises too!

Does someone else want to point out the inspiration for the cover this time, or do I have to do it again? sigh I guess I’ll do it again.

@Mr_Morbach: It’s been that way since the 1980s, and they haven’t exactly been subtle about it. I mean, they even spoofed the cover of The Art of the Deal back in 1989! https://www.cbr.com/superman-lex-luthor-donald-trump/

I’ve been wanting to read this one for a while. I’m stoked!

Bookmarked for the long July 4th weekend. I’ve enjoyed a lot of James Hudnall’s writing in the past.

I’ve been wanting to read this one for a while. I’m stoked!

Woot! Can’t wait to hear what you think!

I plan to dig into this Masterpiece today!

Yep, I might have heard of it before the reading, but if I did, it was a while ago.

Honestly, when I first saw the cover and how like a regular book it was, I wondered initially if this was actually going to be a small book, or if there would be excerpts of one. It’s not that hard to believe – during the Death of Superman, DC actually released a tiny newspaper that was in-universe about his death. Also, around that period, when Clark Kent wrote a fiction book in the comics, I believe they actually published a version of it.

It was a solid enough take on the character here, but I never was the biggest fan of how Luthor was portrayed during this time period. I get them wanting to be timely and make the character more modern, but I think the character is missing something when he doesn’t have the mad scientist angle to him. I think in recent years in the comics and the movies that combined the scientific genius with his criminal genius are far more interesting and far more worthy of being a proper foe to Superman. As he is in this period, he just feels like a Penguin clone with a more legitimate edge.

Hmm…this is a hard one to do for me, because while I liked the art of it, it was more for the storytelling and progression from panel to panel. I can’t recall any particular page that really “popped” for me, if that makes sense.

First, here are the things I enjoyed about this week’s selection:

This week’s questions to ponder:

Absorbing read, not just another 7 minute action read for sure!!!

Excellent story, compelling writing. I loved the way we went with the reporter through his discovery of what Lex has been up to. Great pick @MattMcDonald

Yeah, Luthor’s “interview” was really great. A detail I didn’t really think of until you posted it that was really cool is how he’s mostly in shadow. Really sets him up as this creepy, nebulous and not really there.

Is this your first time reading Lex Luthor: The Unauthorized Biography?

What were your expectations prior to reading?

Well from the cover art I thought it was going to be a lot like one of The Godfather movies and tell the story of how he rose to power.

What did you think of Lex Luthor?

It showed again how ruthless Lex is and how he will do anything just to get what he wants. One of the most surprising moment was how Lex was bullied as a kid and then used one of the bullies to frame for the murder of Peter Sands. That moment showed how much of a long game Lex actually plays.

What was your favorite Page or Panel?

My favorite panel was 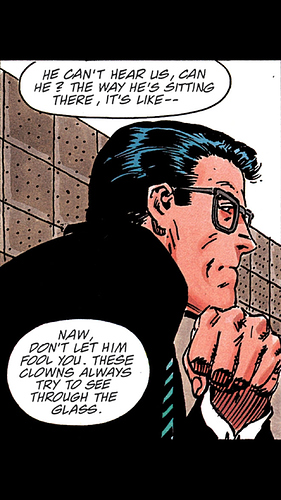 because Clark knows everything that they are about to do even before they did it. Thanks for anothe great read this week @MattMcDonald.

I get them wanting to be timely and make the character more modern, but I think the character is missing something when he doesn’t have the mad scientist angle to him.

I didn’t feel like this while reading, but now that you mention it i really do agree. Looking back something was definitely missing in that regard.

I can’t recall any particular page that really “popped” for me, if that makes sense.

This makes perfect sense. It was a “slow burn” for sure.

Even though the cover of the oversized comic leads you to believe you will indeed read the actual new book, we never actually do, nor do we see one second of the video tape it would have been based on.

Part of me prefers the Luthor in the green battlesuit a la Super Powers, part of me really liked his attempt, again in a power suit, to be a good guy and even join the JLA for a bit in New 52 and in the animated Reign of the Supermen.

It’s definently a grounded take one the character. I do believe it was a little overblown to be believable. But the point still came across. This man is EVIL.

but I’m ok with that because evil villains make very compelling and standout stories.

Agreed. It’s not necessarily a “Fun read” but it kept me hooked from start to finish. Glad you dug it!