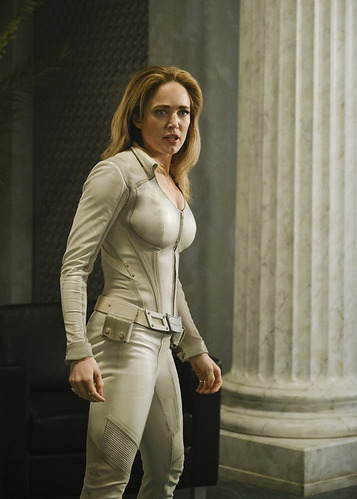 In honor of Pride Month, we’re shining a spotlight on some of the many LGBTQIA+ superheroes of the small screen. Once an angry former member of the League of Assassins, White Canary has become something she likely never expected—a leader.

Who is White Canary?

As the de facto leader of the Legends of Tomorrow, a found family of misfit superheroes who protect Earth from anomalies in the fabric of our reality, Sara Lance earned her seat in the captain’s chair after the untimely death of her friend and founding member Rip Hunter. Though she is no stranger to tragedy, having also witnessed the death of her sister, Black Canary, and former lover, Green Arrow, Sara perseveres through adversity. She’s been a lethal member of the League of Assassins, died and was resurrected, and even fell in love with Ava Sharpe, an Advanced Variant Automation clone. Whenever Earth faces a crisis, Sara and her team of Legends will be there to answer the call of duty.

To read an interview with Caity Lotz herself and get her insight into the character of White Canary, head over to DC Comics!

What’s your favorite moment with Sara Lance? Let us know in the comments!

Any time she is in full ninja mode

The action is great. Also those nice team leader moments are always great.