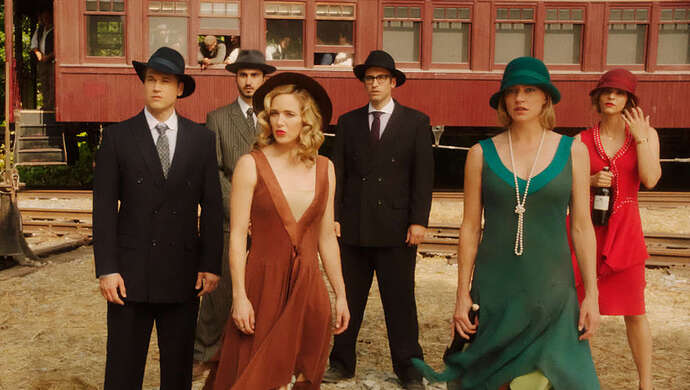 I didn’t see where there was a discussion thread for the latest season of DC’s Legends of Tomorrow, so I thought I would set one up! I’m eager to discuss last night’s season debut, “The Bullet Blondes.”

I love the idea that the Legends are trapped in 1925 without Gideon or any technology to help them. I have to wonder if they won’t be trapped there for much of the season! And then they try to muddle through without Gideon and only wind up mucking things up as usual. I loved the whole idea of a circus and then, when things go south, they decided to become bank robbers (although that is really more of a Thirties thing than a Twenties thing). I loved the bank robber stan and the name “The Bullet Blondes.” And, then, of course, they run afoul of J. Edgar Hoover and wind up killing him! Poor Gary, having to eat Hoover. Anyway, it looks like it will be a fun season!

Stuck in the past without there usual stuff. Definitely a big change. John death still affecting Z2. And learned what that key is for.

The gangs on the run from Hoover who they kill​

. Out of control this season al ready.

Gideon is human. Looks like Astra brought her to life. Interesting.

I still can’t believe people ever rooted for bank robbers, LOL. That really does seem like something that only happens in TV shows or movies.

The Legends being stuck in 1925 is so crazy, but something very, very different and that’s a breath of fresh air. Seeing J. Edgar Hoover was great until Nate accidentally killed him! HAHA! Ava going all serial killer was also very funny. Human Gideon, finally!

Well, I loved “The Need for Speed.” I am really enjoying the Legends having to make things up as they go along It was great seeing Nate trying to play Hoover. It seems that even as the Legends tried to keep the timeline from changing they still messed it up somehow. I loved seeing Gideon as a human. And it was great seeing them come up against Al Capone’s men. Of course, the $64,000 question is who destroyed the Waverider and who made that robot version of Hoover. I am guessing they are one and the same! And I have to say I love the Twenties style opening. It might be my favorite of the openings they have had over the years!

I agree, the new opening sequence is so good!

The team is in the run.

Nate tries to fix his mistake by impersonating Hoover. Gets to caught up in it.

Z2 dealing with the breakup sadly. Very fun with her high though​

Gideon is learning and now can talk.

First the title is great.

The a trip to Gideon’s head. The pie debacle was great.

In the head we see British Jax guide our heroes to helping her.

Meet the OGs. Greta see them back. Didn’t ever expect to see a Hawk again so that’s cool. Fun with the own bathroom thing.

The other treats and fun was great. Great singing all around. Very sweet stuff here.

Young Bishop starts to remember and make gets a Gideon. Does he form the anti legends

Then that end was great. A lovely welcome to Gideon.

Well, the 100th episode did not disappoint! I am glad they managed a look back at the series without resorting to a “clip episode.” And it was so cool that the opening used every single DC’s Legends of Tomorrow logo! Anyway, I loved the whole bit at the beginning between Astra, Spooner, and Gideon. “You broke Gideon!” I also loved that Gideon was able to overcome the virus herself. While Rip may have introduced emotions into Gideon merely as a computer routine, I honestly believe she did evolve beyond that. It was great seeing many of the original Legends again, especially Captain Cold.

We’re now at 4 Arrowverse shows to have a 100th episode, and Legends had easily the best of them all!

The 100th episode was so damn good!!! All the old cast members, the OG Legends!

Damn right! Legends is always the best and this 100th was definitely way better than the others.

I really enjoyed “Speakeasy Does It.” It was great hearing Gideon sing again. Amy Pemberton really has a voice! And I loved the musical fight scene. I am really wondering who is manufacturing the robotic J. Edgar Hoovers. And I loved Gary pestering Nate about his relationship with Zari 1.0. Anyway, I am looking forward to next week’s episode!

Petition for Gideon to have a musical number in every episode this season. Amy Pemberton just has such a great singing voice!

Not spoiler, but Ava this season constantly needing to make a list to check off is something I feel in my bones.
I love her so much.

The team still split on there adventure.

They need wigs. Smart plan as Z2 takes charge. Fun stuff at the speak easy. And they try to help. Meet a friend. Discus some relationship problems and make it out from Hoover in the nic of time.

The others helping save a new friend. Very nice stuff there. And Gideon with the wonderful singing. Kind of reminded me of Mario Odyssey

I really enjoyed “It’s a Mad, Mad, Mad, Mad Scientist.” Matt Ryan was great as Dr. Wyn Davies. If I hadn’t known better, I wouldn’t have known it was him! I loved the whole bit with the “lucky rock.” I honestly think it worked. If nothing else, Spooner’s belief that it was lucky brought them luck. I loved the whole bit with Edison having a heart attack. Anyway, it looks like the Legends are no longer in the Twenties. It will be interesting to see where they have wound up. I have enjoyed the past several episodes. For most of its run the Legends have visited one era and then left it by the end of the episode. It was nice to have several episodes devoted to a single time!

First the lucky rock adventure. A lot of twist turn and hope and worked out well. Fun stuff with Gideon not understanding spooner and such​

The team on the other hand makes it to NY to find Davies. Matt Ryan great as him. Very well done. Fun stuff in the asylum and such.

Z and Nate discuss there relationship and interesting stuff there. And Kill Edison’s with the hovernator.

The team is back and all seems well until the twist we didn’t see coming. They’re not in 2021.

The Legends are lost and have no idea where they are.

Bishop has his own Waverider, but unfortunately his Gideon has gone HAL 9000.

Zari 1.0 comforts Davies, who reveals his past at last.

Gideon is enjoying being a human. She and Gary do the deed.

And finally, turns out that the Legends are in Chernobyl in 1986 just as the reactor is about to go…

Ava and Sarah need some cool down time and go on adventures with Spoons and Astra.

Gary and Gideon
on a food gathering adventure. Her always eating the leaves was great

.
The cocaps reaction to it was great.

Nate dealing with his choice and chooses to go. Interesting.

B, Z1 and Davies had an adventure. Learn the tragedy of his past. And him learning future stuff was great. And they saved Chernobyl kind of.

Bishop is out for revenge but Evil Gideon goes rouge. Ejects TM Ava and clones everything to fix the timeline. And now he held captive until that undignified escape​

. Now the question is we’re are they now.

When are the legends? What EG’s next move? Will Bishop join the team? All this and more on the MidSeason Finale. Same Legendary Time Same Legendary Channel