The @DCFanArtClub was challenged to close out Pride Month by highlighting LGBTQIA+ cast members from the pages and screens of DCU. We’ve also created a Pride Icons thread, which will be a permanent WIP that community members can contribute to indefinitely.

Club members and others in the community, feel free to share your Pride Month art below! 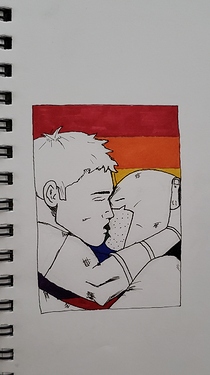 Although I definitely did not attempt that color scheme, Fernando Blanco is just amazing.

Awesome, that is incredible!

I love how inclusive the Arrowverse has been and how they really don’t make a big deal about it, it’s just another part of their character.
Pictured here are John Constantine, White Canary, Thunder, and Mr Terrific. 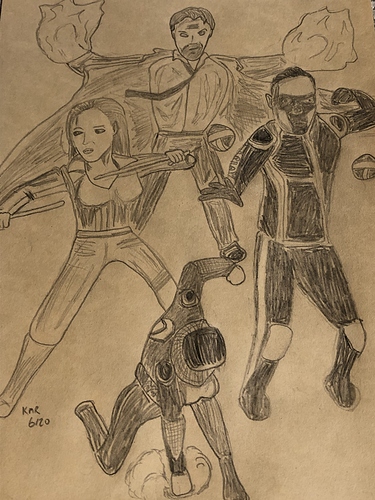 @stefanie.m Love the splash of color added to the b&w! It makes the tender moment stand out.

I love how inclusive the Arrowverse has been and how they really don’t make a big deal about it, it’s just another part of their character.

@ImpulseMaxMercury Couldn’t agree more! Thanks for putting so much work into doing a group shot! Love Constantine’s smirk and Thunder’s kickass pose. 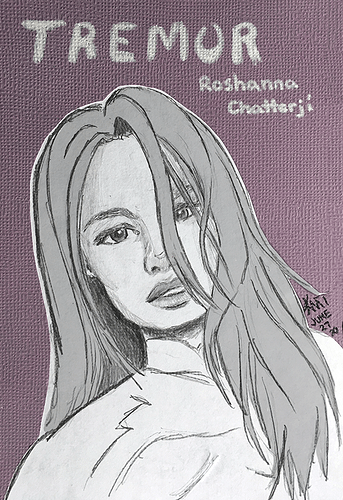 Roshanna Chatterji, aka Tremor, from Gail Simone’s The Movement (which I just started, and it’s scarily relevant to these times).

She identifies as asexual and was born in India, where she was labeled as a “witch” for possessing the power to create earth-shattering shockwaves. Later, she moved to the U.S., where she was enjoying her new life until a drunken joyride ended tragically. Her guilt moved her to a very different path, and she eventually found herself among “The Movement,” a group of teenagers set on exposing and overthrowing their city’s corrupt police force.

@stefanie.m Nice! This looks great! The colorful background really makes the foreground stand out. Love the way you recreated the panel!

@ImpulseMaxMercury I love the way you incorporated so many characters! I also really like the layout of the piece, and the costumes all look amazing! Fantastic job!

@CynicalPink Awesome™️ job! She looks amazing, and I love how the background is a different texture. This really is beautifully done!

Ty! Texture not created by me, I should say

If anything, the “cut and paste” technique makes it even cooler!

@stefanie.m such a great job with this famous superhero couple! The contrast with color really makes it pop! I was thinking of drawing these two before I settled on the Arrowverse heroes.
@CynicalPink I love the way you drew the face and thanks for letting me know about another character I had not heard of before. I’m always learning. I have been getting better (I hope!) at faces so I like the way you have the hair over the one eye and head tilted.

@CynicalPink thanks! I always say, it’s a challenge, so why go easy on myself. I had so many characters to choose from on these shows which really says a lot. I wanted to include Supergirl and Flash but I think it would have been too ambitious and I could not focus on the ones I did have to make them work.
I am especially proud of how John turned out, as I got in his little smirk as we seems to be floating above the others with his trench coat flowing out like another mystical master from a different universe.
As for Thunder I wanted to include her and was struggling until I thought of the typical superhero pose and how her power is her strength like she hit the ground, which I remember from episodes. I feel I may have gotten the proportions off on Sara and Curtis, so I can improve still

@WingsOfAether thank you so much for the compliments! I thought it would be a good way to show them as if they teamed up to take on some threat off panel. I’m glad you liked the costumes as usually I work directly off a photo and draw an exact copy. This time I started with it, used photo for the faces, but tried my own superhero poses so I hope it worked. I feel John and Anissa turned out much better than the others as I feel proportions were off on the others

tried my own superhero poses so I hope it worked

I think it worked really well ‘cause they look great! And kudos to you for challenging yourself by trying new things!

@ImpulseMaxMercury that team is awesome I really like the movement/action poses. Constatine looks particularly great in the back his pose just screams him. Does that make sense? Lol.

@CynicalPink shes beautiful! And like IMM said I’ve never heard of her before so thanks for the backstory and link. I’ll have to check it out but back to your work her eyes are just

Thanks IMM, they are my favorite dc couple.

Thanks WOA, I was originally going to put a small pride flag in the corner but decided to just make the entire background the flag lol somewhat of a shortcut since Blancos work is a little intimidating

but I think it worked out pretty good

@CynicalPink thanks CP, one of the best scenes in that limited series since they literally go through hell for each other

Nicely done @stefanie.m! I really like the B&W feel with the colors behind!

Great detail on on the characters and so many of them!! Well done @ImpulseMaxMercury!!

@CynicalPink It looks like it could be a cover shot! I like the muted colors and tones, seems perfect with the synopsis you gave us. 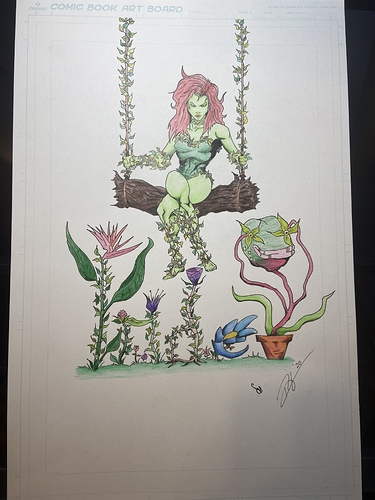 So, I chose Poison Ivy, been watching Harley a lot and been “itching” to do a drawing of her. I got too detailed on the leaves and didn’t get a chance to work out a background, but I think was for the best. My daughter colored it, so it is greater than it ever could have been any other way. She used the colors of the bisexual flag as the color scheme for the lower section below Ivy. She is a chip off the old block, but better! We enjoyed every minute working together from start to finish, always giving each other opinions on what would work and not. I hope everyone enjoys the “fruit” of our labor!