I need to say this while it’s on my mind , why is dc trying to so hard to make the dceu connect, just make movies about your huge story arches and people will be happy I know it, just like how aquaman. Who else thinks the batman movie should be death of the family???

If you search DC Comics on google and go to the news section, there was an article saying that DC Comics no longer wants a shared universe, but wants films independent of one another. I hope the article is still there without extensive hunting for it. If you respond out of interest, I can try to find the article again.

Wb no longer wants a shared universe which in my opinion is a mistake. WarnerBrothers keep making bad decisions after bad decisions smh. Wb making a damn Plastic Man movie instead of Mos2 and Jl main characters like Hawkgirl and Martian Manhunter gave away that they’re incompetent abd have no idea what the hell they’re doing with the DCEU. Based on Emmerich comments, we’re likely not gonna see a Jl vs Legion of Doom or better yet Jl vs Darkseid.

How you’re gonna make a damn Harley Quinn trilogy that nobody wants except for hardcore DC fans and put Superman, Martian Manhunter, Hawkgirl on the sideline? It doesn’t make any sense.

Every time I think about that upcoming Plastic Man movie I laugh. Lmao Plastic Man​:joy:

I had no idea they were making a plastic man movie😂 but I’m glad to hear they’re sticking to solo movies/stories, the shared universe that marvel is doing just doesnt work for DC, they have amazing story arches for each character that would make bank!

A shared universe is a good thing. Interconnected stories are better.

A shared universe does reflect the comics and serves as a marketing tool, especially for new characters entering the market. A good example of that is currently the new (Rebirth) version of Damage. In some of the early issues of that comic, they match him up with other popular characters in the Universe. Had the character been popular on their own, there would have been no need to market him with a series of pair up issues.

In the film universe, we are kind of in a different boat. We have a series of films coming out that have characters that have either been popular on film or are paired up with popular characters in the past. That would be Shazam, Birds of Prey (paired up with Harley Quinn), and Wonder Woman. Sure, we know these characters live in the sandbox (the shared universe), but they should stand on their own for fear of having become dependent on a team up to make them popular. That is what their rival film company is facing now. It seems like they can’t make a film without some connection to the Avengers to get fans into theatres. 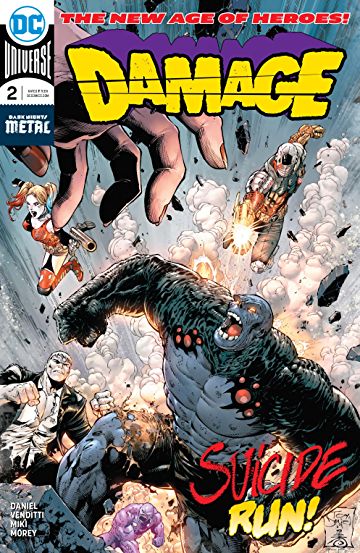