DC VERSUS: Starfire Vs Donna

If Starfire were to get into a fight who would you think come out victorious? I’m being completely unbiased when I say this… but I believe Donna will win. Donna was trained since a child by Donna, she was also made to take down Diana. She also went through many buffs throughout the years it just makes since she can beat Starfire. Also if I recall in Titans Rebirth #16 there was an alternate universe Donna who gave the Titans a run for their money and it took Donna to take herself down.

Also similar thing happened in Return Of Donna Troy she was literally tossing the Titans around then. She even had a battle with Starfire in there and Cass said Donna was going to kill her if they did not stop her.

I don’t normally do these, but I looked up some feats.

From what I can tell, it looks like their strength and speed are roughly equivalent. Donna can pick up a boulder with one hand and Kory can do an elephant. If anything, I’d give the edge to Starfire for flying around with a ridiculously long pillar sized spear. That looks heavy.

Speed feats seem roughly equivalent too. Starfire reacted to an attack from Jessie Quick and threw her and Donna once caught up to a fleeing Jessie Quick. Pretty impressive on both counts. Donna however has a lot of deflecting bullet feats which makes her more consistent in my view, so edge to her.

Starfire has starbolts which can rip right through star ships. Donna doesn’t have any regular weapon she uses outside punching to my knowledge, so that’s a big disadvantage.

In this sparring match, Starfire wins.

I say Starfire because she has similar feats up close and a long distance weapon.

But I haven’t read or seen scans of the fights you mention. They sound pretty good for Donna. I don’t know.

Didn’t they have a sparring match in the New Teen Titans? Starfire won, as I recall.

I’d have to give the slight edge to Starfire, merely because of her long range attack ability. It’s a 48/52 circumstance Star over Donna.

I think it would depend on “the stakes”. I don’t think they always see what is dangerous at the same place on the same continuum. Therefore might not care quite as much on the outcome and might hold back, depending on the scenario.

I think if it was a winner take all, death match. I think Kori would go for the kill sooner than Donna.

All that said, I prefer Donna over Kori as a character. So I’d like to see Donna win. 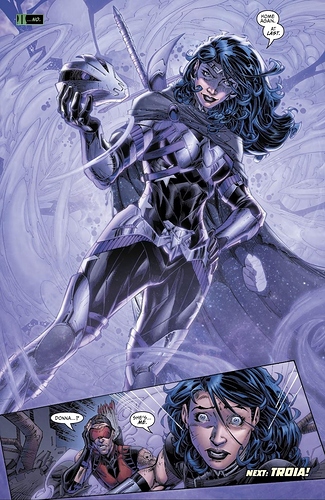 Some Titans she took down 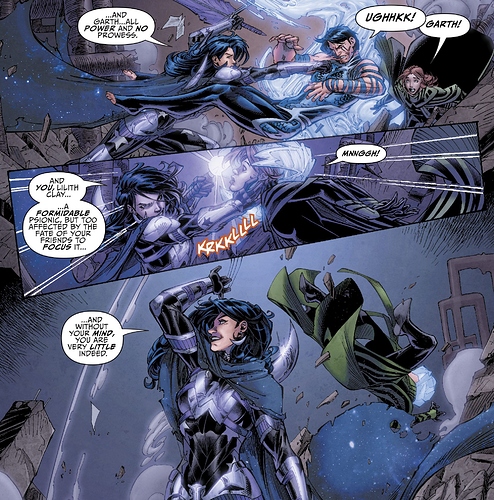 Donna tanking Starfire’s attack in “The Return Of Donna Troy” 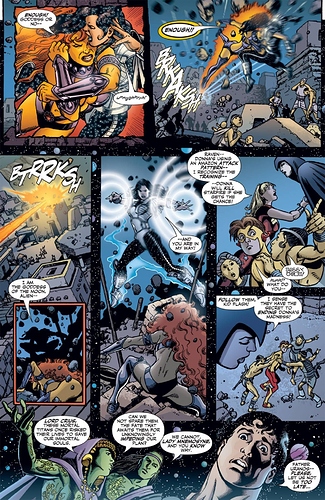 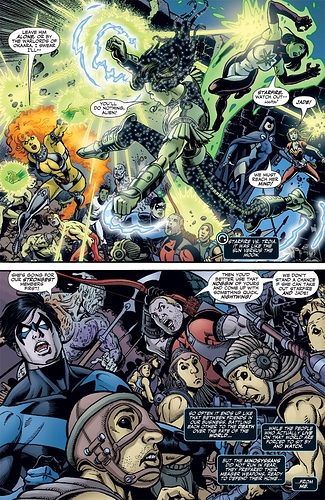 So I remember this story now. She had been made a member of some sort of revamped Greek Pantheon traveling through space. Did she not get an upgrade due to their residual God Juice?

Starfire has my vote. She’s a bit of a wild thing, not particularly fond of restraining herself, and I think that would give her an edge. Of course, the ultimate answer is “depends on who’s writing the story”

Donna is a wildly inconsistent character. She’s been a regular human, an alien, a reincarnated goddess center of the timeline blah. blah, blah. Though her powers are fairly consistent.

I feel like “Return of Donna Troy” and Graduation day had a bit of a hard on for Donna as the writers kept fawning over how amazing she was every panel, I dunno how much I buy her kicking everyone’s asses (I think Raven brought her down eventually though) but I dunno if I buy her stomping everyone (like Deathstroke in Identity crisis) Though evil Future Troia mentions killing Mongol, Diana, and I think Darkseid? Which are pretty big feats, and imply Donna hasn’t reached her peak.

Kory has most of the powers Donna has (well trained combatant, super strength, flight, plus Starbolts) though she tends to get her ass kicked a bit more than Donna in general. She was the judas contract fight… but that was mostly a stick fight. Kory has gone toe to toe with Wonder Woman and won Amazon tournaments, but…

I think I’ll give the edge to Donna, but as StarofLyra said, it probably depends on the writer

Between the two, I like Donna better as a character, so I’m trying to justify it being her, and I’m drawing a blank. Starfire has the more flexible set of abilities. They’re close enough that I wouldn’t exactly cry foul if Donna won, but Starfire’s ranged capabilities kind of tip it in.