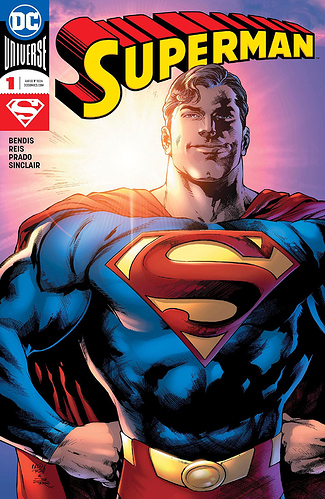 Happy New Year and Harley Quinn Friday, Superfans! For this week, we’re traversing into the relatively new adventures of Superman, as penned by Brian Michael Bendis and beautifully illustrated by superstar artist Ivan Reis. The Man of Steel mini-series that preceded The Unity Saga was only the beginning of Superman’s latest adventures, so let’s take a look at what’s on tap for this week’s unifying material:

SN: Be sure to check out that Aquaman movie advertised on the cover of Superman #6. Word is, it’s a pretty darn good flick.

That’s the happs, fans! It’s time to be ONE OF US and unite with your love of fun comics and quality animation as we ring in a new era of Superman for a new year.

I’ll give Bendis Superman another shot but to be honest I dropped the book at issue #4 originally so I don’t know that a reread will change my mind about the series.

You never know! I do find that Bendis tends to work best in bulk/trade format.

Actually I’ve found the opposite to be true with Bendis’s work myself. I find it only magnifies the various issues I have with his work in general when read in large doses. Still stranger things have happened so maybe reading these issues again might make me see what others have raved about with his Superman.

Well, that story kinda sucked. But I guess the comic adaptation of Superman IV is canon now?

Say what you will about the writing, but I hope we can all concur that the art in these issues is spectacular. There are many a splash page vista of powerful, visceral action to be found within these pages.

Absolutely. Say what you will about Bendis, but Ivan Reis is a God-Tier artist.

Oh the art is wonderful. Reis is one of my favorite artists and his art will get me to at least look at a book I might not otherwise bother with. But as I said back at the time I need more than art and a decent “voice” for Superman to keep me entertained. This failed to do that both then and now and its the writing that is to blame for that. Comics for me aren’t just about the pretty pictures and a great “voice” for a character. There needs to be some substance to it as well or at least a bit of fun. This story lacks both in my opinion and Zaar is a terrible character on top of that.

So, why do some not like Rogol Zaar? Is it that he’s the face for something that previously didn’t have one (the destruction of Krypton), or does he share tropes of other characters you don’t like?

I like him, because he adds a new element to the mythos (Krypton having a personified destroyer) while being someone that can be a tremendous (and continual) physicial challenge to Superman.

Plus, I want an action figure or two of him.

Because he looks, talks, and acts like something from Image Comics.

I see no reason to dislike him, then.

So, why do some not like Rogol Zaar? Is it that he’s the face for something that previously didn’t have one (the destruction of Krypton), or does he share tropes of other characters you don’t like?

It’s a little bit of both for me.

Personally, I don’t see the need for there to be a “face” for the destruction of Krypton. For me its enough that Krypton was lost under the circumstances it was. This just feels like Bendis trying to hard to leave his mark on Superman when he’s already done so in my estimation by getting the “voice” of the character so well that fans adore his portrayal. Even I don’t have a problem with his Superman “voice” here just pretty much everything else. Action is the much better book with the better villians in my opinion but then again I feel like Superman is outside of Bendis’s wheelhouse while Action sits firmly inside it.

As for Rogol being someone who can be a continual physical challenge for Superman I would say we’ve seen similar things before and regardless of whether the characters involved previously stuck around or not ultimately Rogol is just one of many there. He’s just not very interesting to me. I prefer Zod or Doomsday to him to be honest.

For me its enough that Krypton was lost under the circumstances it was.

It also limits the ability of writers to draw real-world parallels to the fate of Krypton. Instead of a story about politicians failing to listen to a scientist about climate change, it’s now (at most) the story of an ugly foreign terrorist blowing up a civilization.

It also limits the ability of writers to draw real-world parallels to the fate of Krypton. Instead of a story about politicians failing to listen to a scientist about climate change, it’s now (at most) the story of an ugly foreign terrorist blowing up a civilization.

I agree. I think the entire story of Kypton’s demise loses something by putting a face and name to it. It’s sort of like revealing the Joker’s real name or revealing to Jason Todd the exact details about how it was that he came back to life. Some things just don’t require detailed information to make sense or to work with readers. The death if Kypton is one of those things to me.

So, read this just last year, but gonna have to jump back in quick. I see from this week that it will be as divided on opinion as before. We did have a Bendis ongoing thread running until the Community upgrade, but just looked and it didn’t start till Superman 12. I will give the pitch for the Supergirl issues that tie into this story. Supergirl with a giant axe rocks.

I will always prefer Krypton coming to an end through scientific means, rather than a destructive brute. However, I appreciate the idea of adding something new to Krypton’s fate. It’s worked for some fans, and not for others, which is fine.

I’m always intrigued when an old trope gets a re-examination, as it can and has lead to wildly interesting and fresh ideas/stories that add to and expand a character/franchise’s legacy and what can be done within.

Other times, a new idea can sink like a stone. That’s okay though, because at least something new and different was attempted. If nothing else, what came before still exists and can be embraced and enjoyed as much as it ever was.

So, what’d we think of Zod’s role in this tale?

From what I’ve read of him in Man of Steel, I thought Zarr was interesting enough in the first issue or two, when he was trying to make the case for stopping Kryptonian expansion to the stars, and I was curious to see what his reasons were for that. But by the time he came to Earth to fight Superman, he didn’t really do much other than grunt and fight. I hope he gets more fleshed out as the series goes on.

And while him destroying Krypton can limit things, as I recall I don’t think it’s revealed how he destroys it. Perhaps he accelerates the process that’s already happening in Krypton’s core to cause the explosion? Might be a good way to have it both ways.

I see from this week that it will be as divided on opinion as before.

Well at the very least there will be actual discussion between fans on both sides here rather than the usual immediate discounting of opposing viewpoints I’ve seen other places.