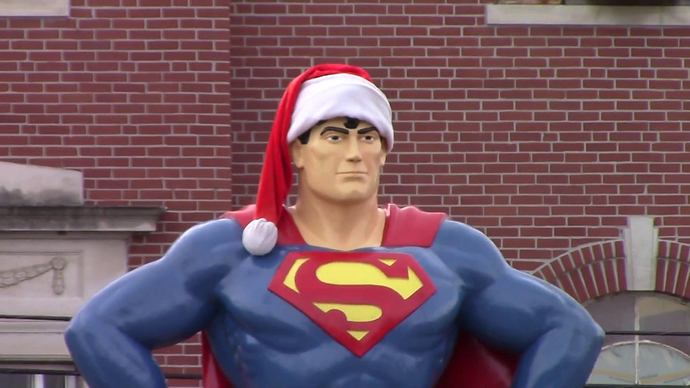 'Twas the Friday before Christmas, with shoppers out in force buying this and that, while Superman watched over all while wearing his Santa hat!

To help ring in the imminent holiday, this week will be focused on Christmas themed adventures of The Man of Steel. I’m makin’ a list, the contents of which you’re more than welcome to check out twice.

What are your thoughts on his portrayal of Mr. Mxyzptlk in general, as well as in comparison to how other actors have played the mischievous Fifth Dimension imp, such as (among others) Gilbert Gottfried on Superman: The Animated Series and Michael J. Pollard on Superboy? Also, given Mandel’s likeness to Lex Luthor, would you cast him as Lex?

The list has been made, and your Superman stocking’s been filled. The tree’s aglow with lights and decor, while cookies and milk rest on the table by the door. Come on in, get comfy and enjoy the holiday goodies before you.

Merry Christmas to one and all!

Superman and Christmas, why that’s like peanut butter and jelly, Cosby and Hope, rainbows and unicorns, and other awesome stuff that comes in pairs.

Other fun things in pairs:

Also, it is to be hoped, Doctor WHO and Christmas.

that Lois & Clark episode was recently featured as part of a special edition late night watch along. At thanksgiving of all times, go figure. =D Anyway, I felt it is a good example of why the crest of the house of El means hope.

In my book, any time is a good time for Lois & Clark.

'Specially when Howie Mandel is involved. 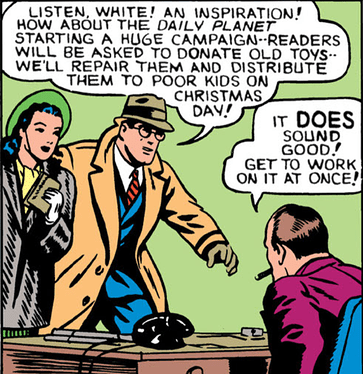 Then one panel later, we discover that Santa reads the Planet: 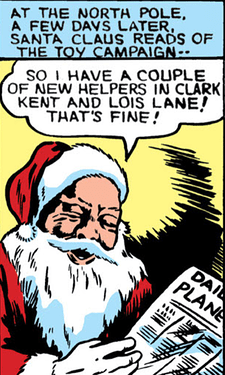 “Ho ho ho! Now, where did I put the National Enquirer?”

And we get some meta-commentary on the rise of Superman toys: 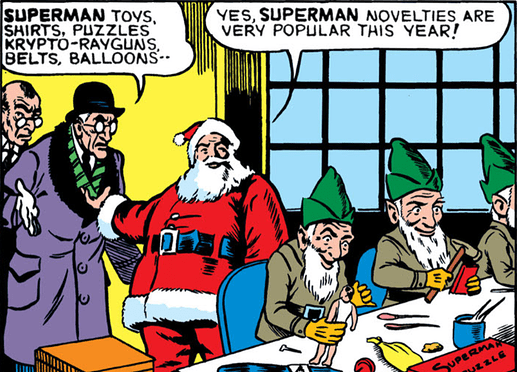 And then we get the birth of the Salkind Cinematic Universe: 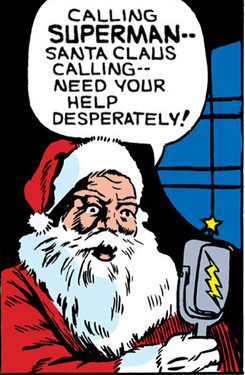 “And bring the Three Musketeers while you’re at it!”

Santa Claus has good taste, so of course he reads The Daily Planet.

The Stern and Jurgens stories were excellent, and they really tapped into the same charitable and socially concerned sentiment as the Siegel story–but without the wonderful silliness that only the original creator of the character can get away with. (It’s a hoot seeing a Jewish author having so much fun with the more universal aspects of the American Christmas tradition.) I feel that Stern, Jurgens, and some of the other writers of the era returned some aspects of Clark’s character that had kinda gotten lost under John Byrne.

The other two stories were good enough, but they feel a little weak when stacked against the first three. The last one also showed off plenty of early 2000s art that I didn’t like.

Or, you know, criticize a kid’s gift idea, then push him down a slide, ala Santa in A Christmas Story?

I’d say that I enjoyed every story a little less than the one before it, but the drop off between Stern and Jurgens was insignificant. The Golden Age story, which featured Santa attacking old rich dudes with an army of toys, is easily the best present under the tree, while the stories from 1999 and 2000 are only fit as stocking stuffers.

There’s some cookies on the table o’er yonder, along with some Christmas candy.

Not too surprisingly I read Superman’s Christmas Adventure laser year. The rottenness of Grouch and Meany is almost preordained, they never stood a chance.
I’m working up some thoughts comparing 1950s Lois Lane vs Iris West, but 1940 Lois is fashion forward and spunky. 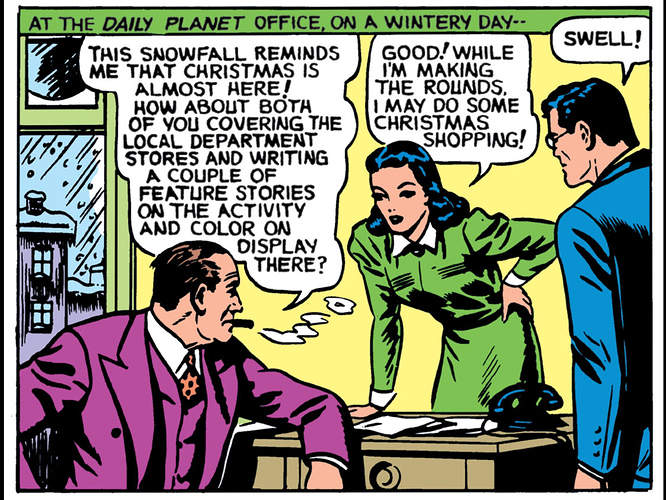 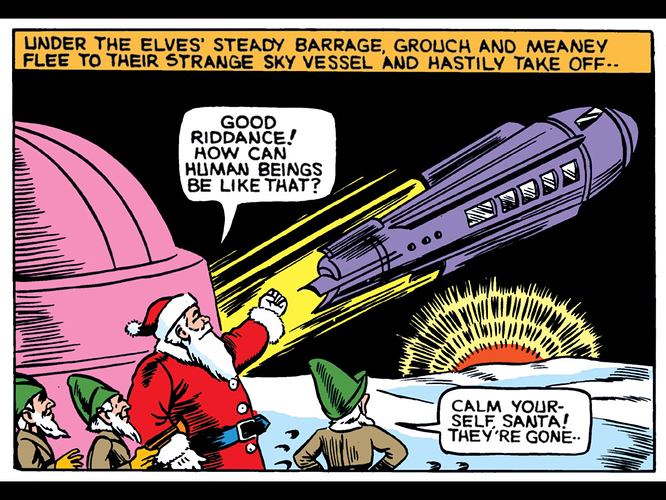 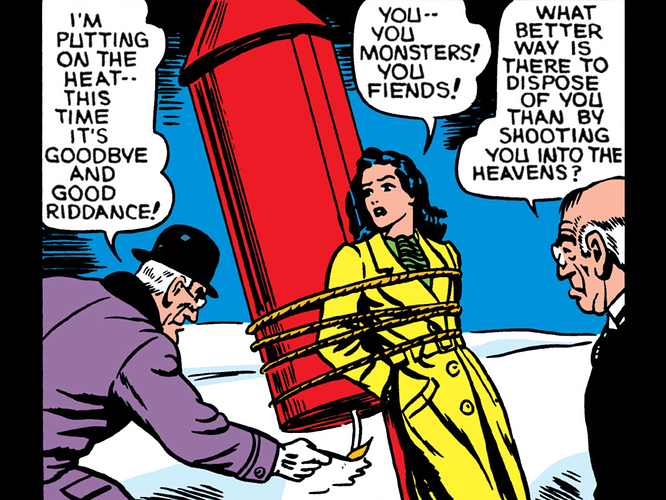 Lois may say "Alot of people don’t feel comfortable using “swell” these days, Clark. " in Superman: The Movie, but to that I say:

Beans to that! I use swell all the time, Lois! 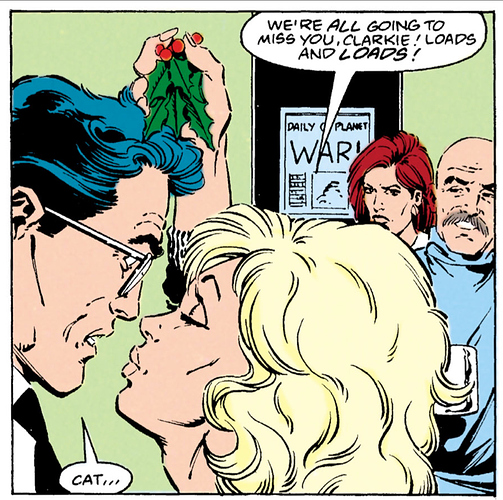 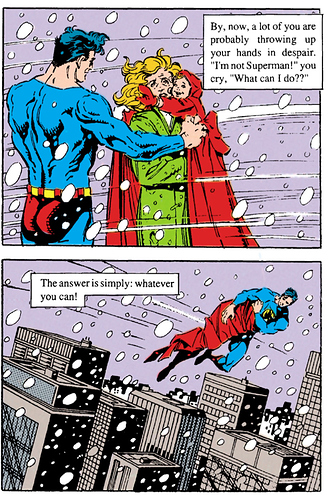 stands under Cat’s mistletoe after Clark leaves, then clears his throat

Anyway, nice highlight @msgtv. That’s one of the many great things about Superman: his unflagging devotion to doing what’s right and helping others.

BTW, your new avatar is rad!

I didn’t care for the first Superman Christmas comic where Superman wake a bratty kid from sleep, kidnapped him just to show him other kids are thankful for a toy. Superman should’ve showed him what a true meaning of Christmas is about! I did like the second Superman Christmas story.
I really like the Lois and Clark Christmas episode where Mr. Mxzplik have Clark living the same day over and over again like Groundhog Day movie. Have you seen it @Vroom? If you haven’t it’s a good funny film starring Bill Muarry. Anyway I thought Howie Mandel did a great job playing the character, I was hoping he’d be back for season 5, sadly was canceled, cause I thought Mxzplik put the baby in Lois & Clark’s house just to cause trouble again.
Anyway Merry Christmas @Vroom!