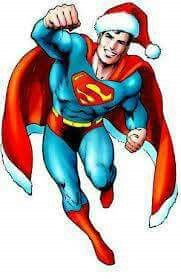 With the advent of the above, we are now officially in the holiday season. Take a whiff of that sweet holiday spirit! Ah, it smells GREAT!

Let’s take a look at the assorted fun you can score a great deal on this week:

Produced in 2006 to tie into the theatrical release of Superman Returns, this excellent documentary (narrated by Lex Luthor himself, Kevin Spacey) covers all facets of Superman entertainment in exacting detail. Featuring interviews with a ton of talent from Superman comics, movies and TV, this remains one of the absolute best Superman documentaries ever made.

There we go, Superfans! A week long grab bag of random, mighty fun as only Superman can provide! I hope you’ve had a solid Black Friday and have a swell holiday season!

Links to comics below:

So, a question: Do you prefer links to a given week’s selection?

I don’t do it because looking up books on DCU is simple and easy to do.

However, if you faithful readers would prefer links each week, I would consider doing that (no guarantees, but a consideration to be sure).

Our comic adventures are quite varied this week. Which was your favorite and why?

It’s a toss-up between that last Krypto story and Superman Family.

Maybe it’s because I’m a dog lover, but I love Krypto, such a good dog. But how dare Superman send him to live at the Fortress? He tossed Mongul to him, wanted Krypto to take care of it, and then got mad because he did? What the hey?!? Train him better, ya Super-doof!

I wasn’t aware of Superman Family and that was enjoyable. It was the one issue this week where I knew all the backstory I needed and it was cool seeing Superboy in his 90’s style. I liked the superteam dynamic they had going here, too.

Have you seen “Look, Up in the Sky!” before? What was your favorite part, and where do you rank it amongst other Superman themed documentaries?

I believe I have, I think this was included in the Superman Returns Blu-ray.

I, uh…don’t have a list of Superman related documentaries, much less a ranked one, so…up there?

I liked how Stan Lee was identified as a comic book legend!, but Gene Simmons was just some “musician.”

Are you doing anything Superman related to ring in the holidays?

I’m certain some gift passed my way at some point will be Supes related. I mean, it is me.

Do you prefer links to a given week’s selection?

If given a choice, yeah, I’m down for the links. I don’t know about other devices besides my tablet - it’s easy for me to find a series, but then I have to scroll through all the issues to get to what I want. Putting in the title and issue number doesn’t pay off.

If you want it to look extra spiffy, you can do it a little somethin’ like this:

@AlexanderKnox That would be my preferred way of using links.

hands off a grant

Oh, I don’t need a compliment. I need an intervention!

Did Alfred from Birds of Prey (also Seinfeld’s Mr. Pitt and Palpatine from The Clone Wars v2, actor Ian Abercrombie) help you?

He did, but he also let my love interest into my secret headquarters! It’s bad enough when he did it to Bruce and Barbara, but why did he have to do it to me, too?

Because…you ate your Snickers with a fork?

Or…made a bet that Dustin Hoffman was in Star Wars?

Sorry to get off-topic for a moment, but I’ve read the Harley Quinn issue.

Well, it’s okay. It’s not as good as the issue with Mullet Joker, but it’s certainly better than the “Emperor Joker” arc from later that year.

Oh yeah that looks better. I don’t know how to do it that way.

Ah, mullet Joker. I like that one, but I especially like the issue of Superman from Byrne’s run with Mistah J.

A week or three of Joker v Superman content sure would be fun.