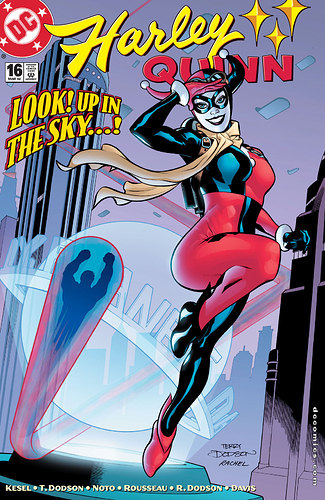 Hiya puddins, and welcome to the next thrill-packed week of Superman action and adventure!

This week, we’re going outside the usual comfort zone of Superman starring titles, and into the world of that lovable multimedia sensation Harley Quinn! She’s on the lamb in the City of Tomorrow, but why? Read on to find out, puddin’!

Here’s what cooking for Harley’s adventure on Superman’s turf:

-Superman: The Animated Series Season Two, Episodes 16, 17 and 18, the acclaimed “World’s Finest” three-parter, which is not only the best on-screen debut team-up of Superman and Batman, but the best Superman-themed entertainment to feature Harley Quinn.

It’s Wednesday, and Wednesday means New Comics Day! Here are the brand new comics featuring Superman and related characters for the week of 2/19/20: 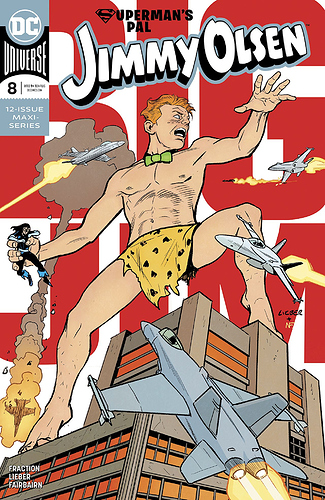 image1280×1968 1.54 MB
Ooh ooh, aah, aah-Jimmy see, Jimmy do! Jix and Jimmy go back to Gorilla City, where they had a one-night marriage-stand. (Don’t believe it? Go reread Superman: Leviathan Rising #1!) Jimmy’s sister Janie and Doc Mantel get to Gorilla City to warn Jimmy about what Doc saw in the future, only to find it’s the attack of the 50-foot Jimmy! 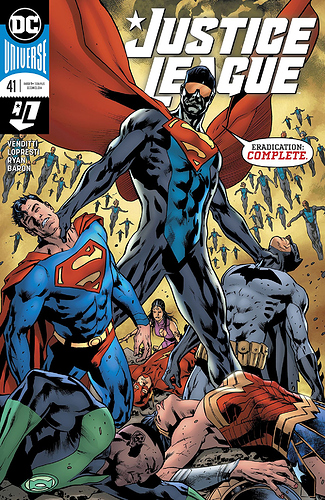 image1280×1968 2.01 MB
Invasion of the Supermen part two! Eradicator and his strike team sweep across Earth with devastating consequences. The Justice League finds itself battered and overwhelmed by an enemy more powerful than even Superman. Batman and Green Lantern plan a counter assault, but it can’t work without the Flash, whose connection to the Speed Force has become unpredictable-and possibly fatal. With the team at half-strength, will it be enough to hold their enemies at bay? 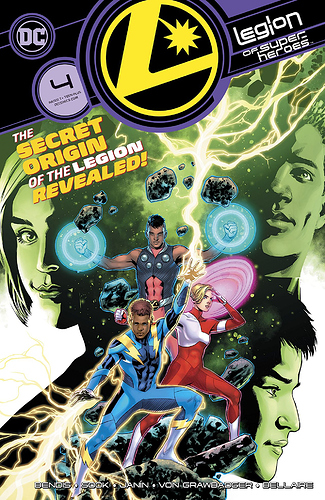 image1280×1968 1.72 MB
The secret origin of the Legion of Super-Heroes revealed! Exactly how did this ragtag group of idealistic, super-powered teens from all across the galaxy find each other? What pulls them and keeps them together? Another gorgeous issue of DC’s future superstars, including the Jon Kent Superboy, also reveals clues to how Aquaman’s lost trident may be the key to Earth’s future and survival! 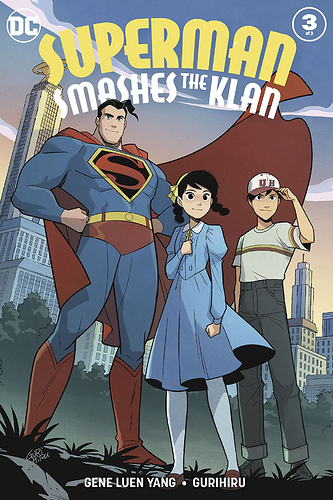 image1280×1920 1.11 MB
The Daily Planet is under attack! When the Klan invades the newspaper’s office, they kidnap Lois Lane, Perry White, and Inspector Henderson. The Klan’s attacks have separated our heroes, forcing Roberta and Jimmy Olsen to step up and help save the Daily Planet staff.
But the Klan has one more surprise to reveal. In order to save his friends and stop the Klan once and for all, Superman must face his own identity to unleash his full potential and ultimately accept who he really is.
Inspired by the 1940s Superman radio serial “Clan of the Fiery Cross,” New York Times bestselling author Gene Luen Yang (American Born Chinese, Boxers and Saints, The Terrifics, New Super-Man) concludes his personal retelling of the adventures of the Lee family as they team up with Superman to smash the Klan.

Comics new to DC Universe featuring Superman and related characters for this week: 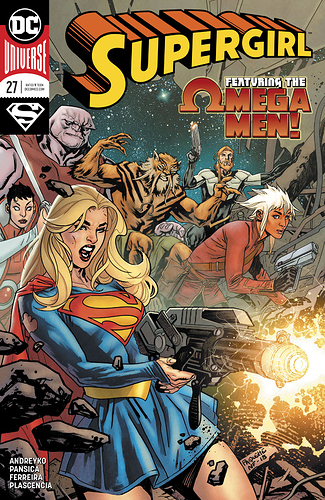 image1073×1650 1.29 MB
Caught in the middle of a Vega System civil war, a powerless Supergirl struggles to rescue as many slaves as she can from the brutal hands of the Citadel. Meanwhile, the Omega Men reel from the discovery that their long-dead colleagues—Nimbus, Harpis and Demonia—are mysteriously still alive! Kara, however, suspects there’s more to their grand return than meets the eye… 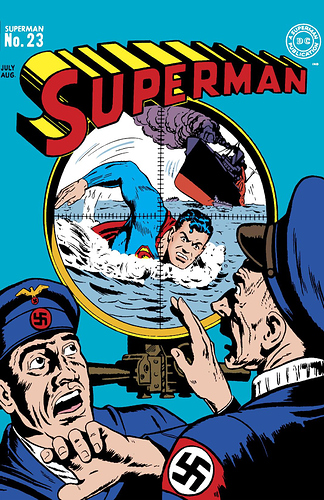 image1072×1650 1.06 MB
When Superman arrives at Camp Towne to make an appearance, he volunteers to participate in the war games that will take place. 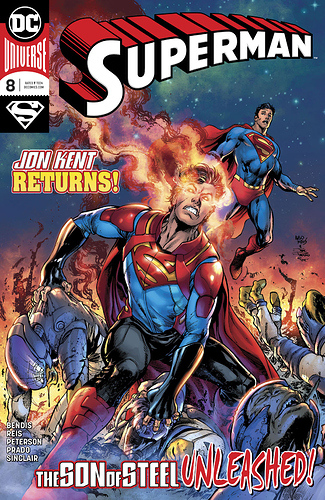 image1073×1650 1.35 MB
The epic secrets of Superman continue to unfold! A few months in space with his paternal grandfather Jor-El changed Jon Kent forever. With Jon now seeking help from his father, the Man of Steel must learn about the war his son and father fought together and set right the wrongs his father may have unleashed on other worlds. See what changed Superboy in such radical ways as the Unity Saga continues. 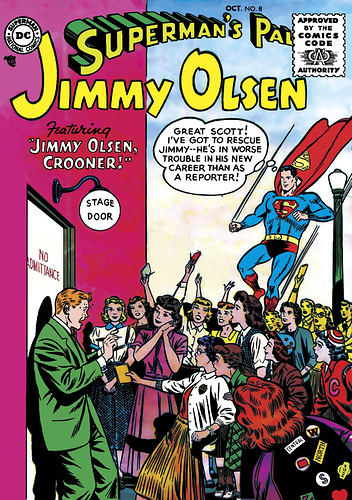 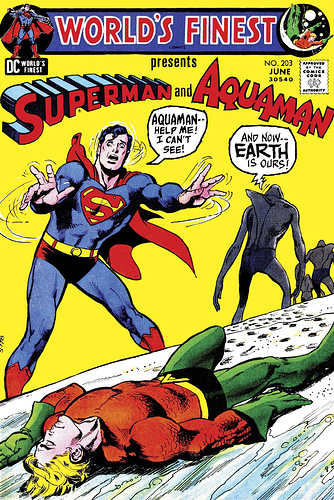 image1104×1650 1.5 MB
Superman and Aquaman must battle Dolphin-Men, amoebic mutants with telekinetic powers and a wish to destroy the human race.

Wowey-kajowey, island of Maui and Holy Superman, Fran! That’s alot of Superman goodness for this week! Be sure to check out Harley’s adventures in Metropolis, watch World’s Finest and discuss it all, along with whatever other Superman stuff you’d like to talk about, right here and to your heart’s content.

That’s a stellar issue of Supergirl now up on DCU

'Tis. Andreyko was one of the best things about the current Supergirl book, and then some.

Just finished the first Harley in Metropolis issue. Really enjoyed it, looking forward to seeing where it goes.

I happened upon this story by accident a while back and enjoyed it more and more with each issue.

The art is also quite nice. I wish the Dodsons would do more interior art.

Yeah the art is really great. I also love the crossover of Harley in Metropolis so far. I cant wait to see more of her dynamic with the other characters from Supe’s world.

I won’t spoil anything, but just wait until Bizarro shows up.

Or in Bizarro parlance…don’t wait until he doesn’t show up. Right?

You know, it really is.

I mean, I adore Scott Snyder, but his Justice League run was just…blah, sadly. I really wanted to like it, and do greatly enjoy parts of it, but Robert Venditti is a welcome change of pace.

I grew bored with the early 2000s story. The Superman vs. Ali spoof, on the other hand, was great. I loved that they suckered Adams into coming back and mocking his own work.

-Superman: The Animated Series Season Two, Episodes 16, 17 and 18, the acclaimed “World’s Finest” three-parter, which is not only the best on-screen debut team-up of Superman and Batman, but the best Superman-themed entertainment to feature Harley Quinn.

In the interest of club synergy, I’ll provide a link to Monday’s Watch Along for this episode.

[batmansuperman] Hello Members of DC Animated club, welcome to the first DC Animated club watch along, we will be watching Superman the animated series 3 part episodes, ‘The World’s Finest’ on Monday night at 6:00pm PST/9:00pm EST. And for those who would like to join the club, here’s a link DC Animated Club Thankyou again for voting and I’m looking forward to watch it with you guys!

And then in the interest of being a contrarian, I’ll post this video to express my feelings about the show in general.

I have those toys!

I liked the Harley in Metropolis storyline, but it was a bit slow in places. I tend not to like stories with too much Bizarro speak in them, though. His dialogue just takes me out of the story sometimes because I have to think about what he’s saying. I mean, who likes to think? That’s ridiculous!

I agree that the boxing match story was a lot of fun. She had his balls. Tee hee.

That’s a swell commercial. To quote their own marketing, “Kenner is fun”!

Regarding Bizarro, a little bit of him went a long way in certain parts of this story. Overall, he was fun, but yeah, a bit much at times.

I prefer their comics-based toys…

Too bad that commercial didn’t:

A. Show the proper name of the line.

Should I gather you bow at the throne of Total Justice and JLA?

Yes, I do recall seeing a Robert Wuhl-esque chap who thought aloud “Where the hell is The Atom?”, as he flipped through the pegs, whilst I looked at the McFarlane Shrek toys and thought “This guy should make DC stuff”.

I mean, who likes to think? That’s ridiculous!

About the minutia of weird superhero quirks and ideas? Absolutely! About the inevitability of death and the heat-death of the universe? Hell no!