Our January update is code named “Multiverse”, multiple universes existing in the same physical space, kept separate by differing vibrational speeds. Krona, an Immortal obsessed with observing the creation of the universe, created a machine that allowed him to witness the dawn of time. His machine interfered with the process and instead of a single universe, infinite universes were born in that moment. In anticipation of your next transuniversal journey, we’ve improved DC Universe with new features and better performance.

Unlike Krona, we will be exploring our Multiverse responsibly and sustainably! Be sure to keep an eye on the Watchtower for more exciting releases every month. And as always, let us know what you’d like to see next!

Good to know! We have a small group of case studies for how stats are populating across categories, but knowing there are some discrepancies is helpful. It should be showing a 1:1 on that cute Wonder Woman menu (I have far more than 6, which the image above shows, for example).

Yay! I’m so happy about the video & link thing. I’ve never been able to open a link or video in community. I also can’t create one. I use an IPad & an Appletv. I’m betting I could on a computer b/c I used to be able to see pics I posted on my parents computer. I don’t own one never have. I have a feeling it would probably be the same with links & vids. I’ll be so happy if I can finally tap a link & see what everyone else gets to see. Oh I can’t post videos either, just pics. The mark of how amazing this site is to me, is that I’ve had that problem since the 1st day & it’s so awesome that I don’t even care. I mean it would be nice, but I’m still your number 1 fan. 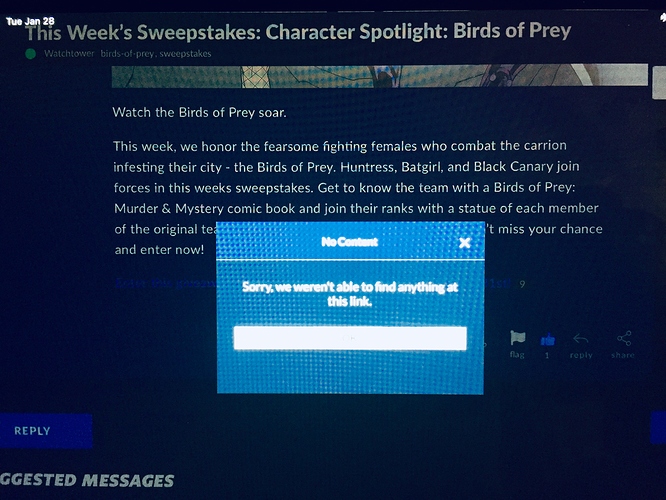 ! iOS devices are being very temperamental, but the good news is we are currently looking into it and hoping to have a solve by end of February- Sounds like a long way away, but it’s one of a long list of fixes we’re investigating to improve the experience

Thanks for sharing the screenshot, that’s super helpful. In the meantime, when you can’t access a link and aren’t sure where to find it, give us a nudge in the comments and we can give you a workflow of where it exists on the service or outside the service (not elegant, but a humble workaround).

Absolutely no problem. I’m very patient & I appreciate that you probably have a laundry list of fixes coming in from all the users on this site. I can wait. Thanks for the updates on what’s happening. The new material coming is like my dream list. Comics I was 1 arc away from all dropped on the same day with more of the same coming. The movies were the ones I’ve been waiting for since day 1. I own hell to pay but the rest are all the ones I’ve been itching to watch again. Thank u

Forgot. I’m trying to put out all the good karma possible to win that BOP sweepstakes. I’ve wanted that Huntress forever. It would be the perfect 1st win. The only ones I wanted that much were the Titans collective statue & the Catwoman giveaway with the bombshells statue.

I’ve been enjoying the service a lot, the thing that it really needs now is the ability to see the whole page after going panel to panel to really appreciate the art and the effort the artist put into it.

Such a sweet potato?

the thing that it really needs now is the ability to see the whole page after going panel to panel to really appreciate the art and the effort the artist put into it.

Seconded. Would really love this.

P.S. Dark Mode is the way of the future and I’m all for it.

Public Lists that we can make!!

can’t wait for the stat stuff to be on IOS!

I’m having the same problem.

I see you, Harley!