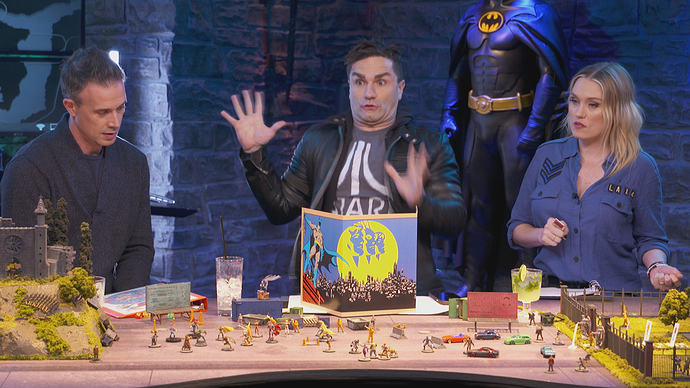 This wild ride doesn’t stop! We’ve now had ALL 4 players revealed (who guessed them all correctly?), we’ve learned that friendship and murder do, sometimes, go hand in hand, we’ve bonded, once again, over “Martha”, and we’ve transitioned a black, spray-painted wood-paneled station wagon into the coolest car on the planet (sort of).

How can there possibly be more?

I called it was superhero the question

Lex Luther, Superman, and Miss Teschmacher. Another great episode looking forward to the finale and seeing how everything raps up.

I really like this show and I hope it gets a season 2 but there needs to be some tinkering to remove some problem areas. First I think the guests should know from the beginning what superheroes they are going to play so they can be paired up with the superhero that matches their personality and play style. Xavier Woods would be better matched as a villain or antihero like Lobo. I don’t think he is suited for Batman. Secondly a better match for the heroes and the campaign. This is set in a high school so the heroes who went undercover there should have been teenagers.

Otherwise I hope this gets picked up for a second season.

I was totally wrong about who they all could be only because I thought they would be teen heroes. I thought Carl would be cyborg, Tommy was Robin, Dina was wonder girl, and Katie was either Catwoman or batgirl.

Like all DC Universe’s Original content I’m in love with this show and I hope they continue making more episodes with the same group or different people. Just more please.

wow my predictions for very wrong! i didn’t expect the janitor to be Lex the whole time. Great episode though i’m loving this show

This is my escape from all the Crazy. Please give us more!!! Are you all taping your new season now because i could watch these all day.

Wow! What another fun episode and we’ll be getting a bonus conclusion, Yes! Happy I got half of the characters right in thinking Clare would be Catwoman and Carl being Superman with the others also being great reveals as well.

What a reveal with Licks being Lex and masquerading as The Question, suit and all ha ha ha. Props to those that also thought that Clayface would also be involved with all the mud they had been leaving behind.

Will be fun seeing how the battle ends in the bonus episode and hopefully there is room for another season since it has been a lot of fun watching the game play out. They still have to deal with this guy being still on the loose somewhere!

I believe the heroes are supposed to be teenage versions of those heroes (this would be why Wonder Woman seems to have actually been in a relationship with Rod, why Batman doesn’t have an actual batmobile, etc.). I think the idea was to make an intentionally silly/campy setting, so we aren’t supposed to be worrying too much about things like why Clark and Diana would be going to a high school in Gotham. So, rather than being heroes going undercover as high school students to uncover a crime ring (as many viewers probably suspected at first), I think they’re just supposed to be four teenagers with superhero/villain alter egos who coincidentally were all going to high school in Gotham and got caught up in this plot. (I believe the GM said Catwoman knew the principal was up to be something and was trying to uncover it, but Clark seems to have just been trying to be a good student.)

On DC Daily they were tossing around the idea that the whole thing might be some kind of virtual reality/psychic projection that the characters are trapped in, which is still possible. But I think it’s just supposed to be an intentionally silly premise that isn’t meant to adhere to any comics continuity, and that doesn’t really bother me; it’s still fun.

I also agree that Xavier isn’t really suited for Batman. I’m glad the GM at least cut off his hero points for trying to kill. (Though of course it should be noted that the very early version of Batman killed criminals without a second thought.)

80s Batman killed. And since this takes place in the 80’s it was technically accurate but Sam was always great about keeping that in check.

This got insane! Xavier is intense! I see others think that he is not suited to Batman but I have to admit, he is more effective than the rest put together and has a cold, calculating mind. A little ruthless? Yes. Sounds like BvS Batman? No. He’s way cooler.

I didn’t see half of that coming. and the other half was mostly the credits and recap.

Great job directing this show Jon Lee, this show reminds me of when I was a kid 30 years ago playing a similar tabletop roleplaying superhero game with my brother and friends all the time. The rules were very similar to this game and we would improv and imagine wild scenarios. You guys have the luxury of using great detailed figures for your characters and a 3D immersive map compared to the flat maps and cheap stand up characters I had lol. Great idea for a show that I just discovered recently and binged in 2 days. Please keep it going for a Season 2 and keep up the great work.

The cast of DC Daily makes me want to punch an actual baby. Why do they talk to us like we are 5y olds lol?

Before anyone gives Jon Lee Brody some flack about this comment, I would suggest you go back and read some of the 1980s Batman stories by Mike W. Barr (my favorite Batman scribe after Bill Finger) and Jim Starlin (the man who killed my favorite Robin). And I’ll resist the urge to drop a link to a certain book club on here that happens to be reading through those runs over the next month…but you might find the link beside my name anyway.

Knox, you just got another grant!

Thanks so much! That means the world to me! Appreciate you watching!