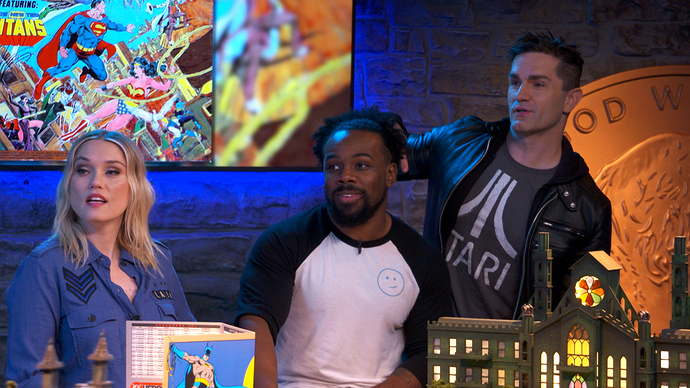 The hits… er, well, shots in this case, just keep coming, don’t they? From promise rings and priceless diamonds, to a thrilling lesson in the art of trash talking bad guys from a distance, and some shocking character reveals, this episode’s chock full of surprises! Whew! Who knew a day in detention could lead to such a wild ride?

If you haven’t watched episode 4 yet, make sure you do then come back here and let us know what you thought!

While you’re at it, don’t forget to take time today to drop by our Live Q&A w/ Sam Witwer thread, and let our resident Game Master Extraordinaire know what pressing questions you have for him! Sam will be answering them live TONIGHT, Fri 3/20 at 6:30pm PST!

Wow! Easily the best episode yet. This was so much fun. The battle scene was filled with tension. And Xavier’s idea to stuff the smoke bomb into the goon’s mouth and throw him at the others was SO creative and so in-character for Batman.

This Entire lineup of Players and how they play off one another is truly astounding. LOVE Freddie - he’s easily my favorite next to Xavier! Also loved when the characters finally revealed who they were - it was something truly out of a comic book. I really like this idea (Agent LIBERTY!) of DC Actors or Pop Culture figures playing a DC oriented Tabeltop game. I hope we get more shows like this in the future!

Due to the high-school setting, I actually thought that our hero reveals would skew a bit younger (Robin, Wonder Girl, Kid Flash, etc.). Honestly, I think that would have worked better.

I finish watching today episode, I got two rights and 1 wrong on my guess! To be honest I was surprised that they reveal the characters this early. I can’t wait to see who Carl is. I think he’s the Flash.

Did anyone notice there’s episode 6 lock? Think they show a whole game without stopping every half hour?

Wow talk about an episode! Phew, so many great things to say! Fun to know out of all the comments that we had a pretty good idea that Clare was going to be Catwoman.

Nice to know that Vanessa actually turned out to be Wonder Woman as I had suspected Wonder Girl or Super Girl at first.

And Holy Smoke Batman! That take down was phenomenal as well as the reveal crashing through the glass! Now it makes perfect sense why his car was also black and cool because in the same way it would be his own Batmobile.

Now begins the mystery of why the “kids” they were fighting so strong and even able to shrug off a bullet while popping some sort of strength serum… Hmmmm… That sounds like something either Bane or Deathstroke could have a hand in doing. Although, with that “Kneel Before Rob” line, maybe General Zod did some experiments on them?

Definitely going to be fun finding out, and also seeing who Carl is actually going to be. A blur of red does sound like The Flash, but maybe could also be the cape of… Superman! I might only suggest Superman in that he acts dorky and even with his inhaler, that’s something I remember Superman’s son having in Superman Returns.

Will look forward either way how it plays out in the next episodes!

Yeah I also noticed there is an episode 6 now. Maybe there is an epilogue to the story after episode 5, or having all of the episodes in one would be pretty cool to see.

Xavier - leave it to an top tier professional wrestler to come up with the most creative way to take down a bad guy!

Did they just reveal that Rod is actually Zod at the end or is it me? It looks like Freddy’s character is The Flash if you watch the preview for episode 5. Looking forward to next episode even more now that they have revealed some of their actual characters.

I totally got all the characters right so far! I knew Xavier was Batman & not Flash, although I could see why some thought he was flash early on… I’m thinking since they hinted at Rod possibly being Zod it would make sense that Freddie would be Superman, although with the red blur I guess it could be flash but there was no mention of a lightning trail or a krak-a-kooom! Lol… so I’m gonna lean Supes & he fights Zod or Rod lol… this episode was amazing though, I really want to play this game now so badly! I can’t wait to see how this finishes & who Carl actually is!

Also, does anyone else think that Bane is involved? Since that one dude drank that formula & started hulking out of it could be the blockbuster formula like in young justice? Either way it has to be venom or blockbuster formula… and the other dude moving faster than he should, I know rod was one, I was just thinking about my guesses as to who Freddie could actually be, I said Superman since Rod could be General Zod, but the other guy could be zoom or the reverse flash, so I guess Freddie could either be Supes or Flash… geez, the other characters were so easy for me to figure out… I’m guessing either Superman or flash though… just wish we had more to go on than the red blur, although Freddie did say that hair metal wasn’t good enough to save that kid & he was good enough & wanted to save him now! Is that The big blue Boy Scout coming through? But on the other hand his pension to talk trash & annoy during fights sounds like a Total flash thing to do… what do y’all think?

Ok, also I was thinking about the original characters names & who they actually turned out to be, could there original names be a hint?.. stay with me now, even tho this is kinda a stretch lol… you got Dinah, Katie, Tommy & Carl… ok, so Dinah or Diana as in prince turns out to be Wonder Woman, Katie or Kyle as in Selina turns out to be Catwoman, Tommy or Thomas as in Bruce Waynes middle name (Batman #20 by Tom King) & his fathers 1st name turns out to be the Batman & could Carl or Clark as in Kent turn out to be Superman? I could figure one up for the flash lol, Carl & Barry Allen or Wally west didn’t fit haha… anyway, like I said might be a stretch but I thought it was interesting, any thoughts?

they gonna get the joker ?

Personally, I think a few of Batman’s moves were a little more brutal than needed, especially against what seemed to be high school kids at first.

Now we know who everyone is though, and not who I expected. Superman enters the scene next week! Should be interesting. Could be Flash, but Flash wouldn’t have taken getting tossed very well, and the inhaler bit is reminiscent of the kid from Superman Returns, Not 80s, but a nice enough touch that I can see Kal using it as cover.

The idea of the bad guys drinking a version of Venom or the Blockbuster formula is good. I think I’d have scaled back some Velocity-9 if I was running this. The speed would balance the field a lot better than raw strength does.

I do notice they’re using (1) older versions of the characters. In the 2nd printing of DC Heroes, Batman had a 5 Strength, not a 4. He had the 4 in the original version of the game. (2) they’re not really using all the rules, likely to keep things simpler for this show.

I do think Teen Titans would have been a better reveal though. You could have pulled off almost the same thing and it’s fit better.

Argh, I purposely avoid watching the next episode preview since I’m gonna watch the next episode anyway, but the whole Superman/Flash thing still got spoiled for me since everyone’s talking about it here.

I do think Teen Titans would have been a better reveal though.

But then your pool of possible characters would be EXTREMELY limited, especially considering the time this game came out.

I was also feeling a certain Kansas vibe, especially with the repeated use of the inhaler, but the high intelligence screams a certain “speedy” presents. I am so excited for the next reveal!!!

I really enjoyed the episode. Think it was a bit weird that Tommy was Batman and Dina was Wonder Woman (although the undercover name does make sense with that one), only because they were apparently undercover as high school students. I mean Batman is a master of disguise I guess but still he passed as a high school student? Wonder Woman is just weird… I never pictured Wonder Woman as passing for a teenager. And weird a character like her went undercover for so long, I mean how deep undercover was she to become the most popular girl in school and date two different guys? Also should note she dated two HIGH SCHOOL guys. I mean maybe they were seniors but still.

That being said, I probably am reading too much into it. This show is about fun, and to be honest this was set in 1984 and using a game made just after Crisis. So this doesn’t sound entirely unlike something the comic writers of these characters would do back in the day.

And the fight scene and the reveals were all a lot of fun. And Xavier kicked ass as Batman. Dina was a good Wonder Woman also, although she had experience playing that role before. Freddie Prinze Jr. once more killed it, no idea who he is, the fact it wouldn’t have to be someone younger like my earlier guesses given who the others are opens it up. But still a loss, the red blur in the preview would make me think of The Flash, but not sure they would have shown it in the preview if it was that obvious a giveaway. Looking forward to finding out.

The fight scene was great also, loved how they did it. Fast paced and the players were creative in their use of the characters duing it. Carl annoying the Scorpion into being useless was hilarious (seriously, that annoyance is his real power).

Still some issues with they clearly edited a lot (How did Claire have so many hero points? I haven’t been keeping count but 13? I am pretty sure we never saw her get that many. Have no doubt she did, but guessing that we must not have actually seen that.

But some slightly confusing issues with the reveal and time issues aside this episode was a lot of fun. And believe me today I needed it.

Sam confirmed that all the characters ages are correct except for Tommy aka Bruce Wayne aka The Batman who actually pulled a 21 jump street & is actually 21 years old, but Dinah, Katie & Carl are all actually the age of their characters, so does that mean in this game that Catwoman is a sophomore, Wonder Woman is a junior & Whoever Carl ends up being either Supes or Flash is a freshman?