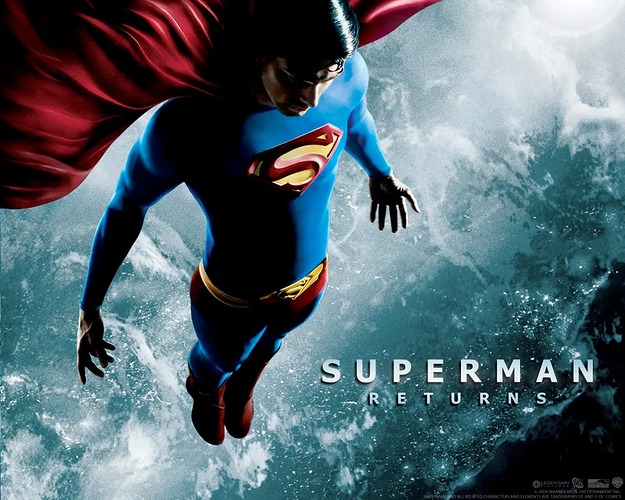 The @DC-TV-And-Movie-Club is doing another Superman watch along! We’ve done all four of the Christopher Reeve Superman movies, now it’s time to move on to the next in the adaptations of the iconic Man of Steel, Superman Returns. Join us on June 12th as we watch this film together.

Here is how you can join in:

WHO: You!
WHAT: Superman Returns, which can be found on HBO Max.
WHERE: We will be doing the discussion portion of the Watch Along Below!
WHEN: Sunday, June 12th @2pm PST/5pm EST
WHY: To enjoy this amazing movie together!
HOW: Great question–read below!

Hope to see you all there!

Will be here and helping to host! I am excited to see this again. It has been since it was originally released since I have seen it.

Superman on a Sunday afternoon.

“What more could anyone ask?”

Fun Fact: In 2006, I went ape**** for many types of Superman and Superman Returns-related merchandise.

Thing was, this was when Batman and Superman were tied for my #1 fav character.

I’m quite confident that my rampant consumerism of Superman and Superman Returns products in 2006 may have been partially responsible for Superman overtaking Batman as my #1 in 2007.

One of my favorite scenes in the movie is when Lois and Superman reconnect atop the Daily Planet, and then fly through the night sky.

Yeah, its more or less Singer aping Donner, but I don’t care.

Its romantic, sweet and the music is solid, too (“How Could You Leave Us” gets a ton of Spotify play from me).

I also dig Lois and Superman’s last words in the scene:

Lois: “Will I see you…around?”

Since 2006, “I’m always around.” has been a frequent part of my verbal lexicon.

When I say it, I always get a little inner-tingle of joy, as it allows me to channel my inner-Superman and reference this movie.

This movie has so much nostalgia for me! It came out when I was really getting into comics and my peak Superman fan (is it a phase if it lasts forever?). For my birthday that year, my brother and sister bought pretty much every action figure Walmart offered

I made the mistake of attempting to save a promotional Pepsi. Unfortunately, I discovered after a few years, the can had corroded and leaked all over my monopoly game

So remember kids, save the can, drink the contents, and store your collectables away from all sources of liquid!

That reminds me of Pepsi’s soda can promotion for when The Phantom Menace came out in 1999.

They had character cans from Pepsi, Mountain Dew and…maybe one or two other brands, along with some super-rare can, whose details are foggy to me, ATM.

My dad and I yoinked all of them (minus that super-rare can) throughout summer '99. We drank the soda (duh

), washed out the cans and then had them on a display amongst other SW schtuff we had back then.

We also did this for Dr. Pepper’s BvS promo in '16, but that had far fewer cans to collect than Pepsi’s Star Wars promotion in '99 (which had around 30+).

Also, I believe there was an energy drink promotion for Superman Returns.

However, I don’t think I ever found the damn thing, despite spending far too much time searching for a Superman-based energy drink that then-23-year-old me did actually dedicate to the matter.

Ah, if only I could go back and watch it again in 2006, when the film’s merits outshone its flaws. Now, I just want to recut it and get the runtime down closer to that of the other sequels.

Love this film, cause it was the only Superman film I saw in the movie theater where he wears a red trunk! I had a few toys and a videogame of the movie where a Tornado is a main and final boss! I’m not kidding!

I knew the movie had some weird affiliated merchandise (because what movie doesn’t in more modern contexts), but that video game baddie takes the cake. Having not seen it since the original release, I am wondering if I may watch it and be like “Oh my, what did I watch” now that I have seen the Christopher Reeves films. Definitely will comment on this. I am like you and it is the only one I saw in the theater where he wears a red trunk, but who am I kidding it is the only one I saw in theaters hehe

You didn’t see any of the DCEU flicks with Superman in theaters?

Speaking of Superman on the big screen, Superman Returns was the first Superman movie I saw in a theater, so it will always have a special place in my Superfandom because of that alone.

You didn’t see Superman and the Mole Men in theaters? Who’s the shamed one now, hmm?

You didn’t see Superman and the Mole Men in theaters?

I’m under 40, so even my parents didn’t see that one in theaters.

“We’ll be right back, after a word from our sponsor!”

Oh look, its the ad where Johnny Carson says “Hello. I’d like to talk to you for a moment about diar-” and then gets beaned by cream pies. Classic!

Much like when Hans gets popped in the ba-

Looking forward to this masterpiece tomorrow!

A little less than 5 hours to go!

Heads-up to the @ModernAgeSupermanClub and @JusticeLeagueBookClub, if you’re looking for a good time on DCUI this afternoon, this thread’s The Place to Be™!

Wasn’t sure if I was going to be able to since I’ve been on vacation – funnily enough at the Superman Celebration in Metropolis – but we got home early, so I should be able to be there for it.