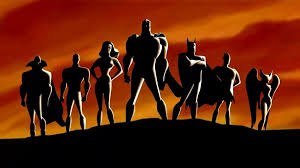 The @DC-TV-And-Movie-Club is starting our weekly Watch ALongs with the first episode of the amazing Justice League Animated Series - the three parter “Secret Origins”. This series is part of the beloved DCAU and stars some of the greatest DC voice actors with the fantastic writers, producers, and directors that made shows like Batman: The Animated Series, Superman: The Animated Series, and Batman Beyond so amazing. It is a great start to the next chapter of this beloved universe of characters.

This is how you can join in:

WHO: You!
WHAT: Justice League-Season 1 Episodes 1, 2, and 3 “Secret Origins”
WHERE: DC Universe! We will be doing the discussion portion of the Watch Along Below!
WHEN: Wednesday August 26th:
Part 1 starts @6pm PST/9pm EST
We will take several minutes between each part so people can catch up if needed.
WHY: To be closer as a community and watch this amazing series together
HOW: Great question- read below!

Can’t wait to see you all there! Thank you so much to my new Co-Leader @CassTheStreet for helping me organize this watch along and future club events!

I’m looking forward to finally getting to watch these episodes. They will be new for me. I hope others in the community will join up and watch along with me for my first foray into the JL animated series.

Today is the day for the WAL! I look forward to watching this with members of the community tonight. Again this will be my first time ever watching it, so it is even more exciting for me. I hope you will join me in this first foray into the Justice League animated series.

A little over 30 minutes to time for the WAL!

You have to have the video pulled up on a screen of your own choosing and then have a device pulled up to chat here on.

More info can be seen above.

Less than 10 minutes. Get ready to press play at the top of the hour to the second. We will take a few minutes between each part so don’t let it auto play. Also don’t remember if first episode had intro song but if it does we aren’t skipping it so we can stay together. This is going to be great. Amazing episode

Oh looks like I checked the app at a good time

I’m here, paused and ready! Loved the show as a kid, watched it through a few times in the past. Looking forward to watching it with a crowd, and with a first timer in @CassTheStreet, looking forward to seeing what they think.

Is anyone else here watching it for the first time?

Same here. Was a kid when I saw this show for the first time so I forget what it felt likt. Conroy batman voice is still pure nostalgia for me though.

Hey all. Second watch along.

Welcome to those watching along for either the first or second time or heck the millionth time. I look forward to watching with you all.

Yeah, this more modern Timm style makes it inherently cleaner to animate, which helps in making it look good even today.