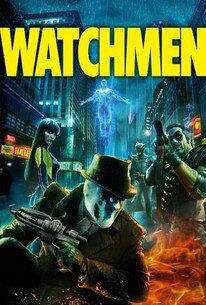 In honor of the season finale of the Watchmen series on HBO, this week we are going to watch Zach Snyder’s 2009 live action movie.

As you discuss this adaptation of the classic graphic Novel of the same name, feel free to use the following questions to guide you:
What was your favorite Character?
What was your favorite moment or line?
Do you think the major decision at the end was the right one?
How well did this do in adapting Alan Moore’s amazing graphic novel?
How would you rate this movie (1-10)?

Discuss below and enjoy the movie!!!

Will jump in again later, but I will say now that this movie actually improved for me with rewatching, particularly the extended version.

Not the most original response, but Rorschach is definitely my favorite character, with Nite Owl getting pretty close. I think the most memorable moment for me was originally the prison scene where Rorschach burns the other prisoner and says “I’m not trapped in here with you, you’re trapped in here with me”. After re-watching, though, I would say the scene where both Rorschach and Nite Owl have a great friendship moment after the prison break stands out to me now, since it really speaks to how both heroes differ on how to dispense justice, but respect each other enough to care deeply about the other. I disagree with the decision at the end, mostly because I don’t think it would really fix things in the long run. Either way, movie or graphic novel, it feels like using a scapegoat “evil” to draw the countries together, would only be a temporary solution. The fear of Dr. Manhattan/Aliens would only lessen the longer time goes on, then global issues/disputes would resume like normal. As an adaptation, I would say that Watchmen is really good at trying to portray all of the events, but it fails in some ways by sensationalizing some aspects of the story. Comparing the movie to the novel feels like comparing the 2010 Clash of the Titans to the 1981 version. Both tell essentially the same story, but one feels like it relies on modern technology more than it really needs to. Overall, I would give the movie an 7.5-8 out of 10.

While everyone loves Rorshach cuz he’s such a unique and badass character, I’m going to go with Jeffrey Dean Morgan’s Comedian. Even though he dies early and is a truly repulsive person he typifies Moore criticism of superheroes and America and all that stuff. I don’t agree with Moore, but the Comedian is a scene stealer.
Rorshach’s death for me is the moment of the movie. He does not give a crap what will happen to him, he will do what he thinks is right regardless of consequences.
I think the ending greatly improves on the one major misstep of Moore’s series. Everything this is so grounded, gritty and French Connnection meets capes, then a gian octopus. This end feels much more right.
Like a said above, I actually like the movie more now than when I first watched it. Everyone wants movies to be true to the source material, but at first this seemed too true which shots replicating comic panels. I little less of that and I think it would have felt looser and more “real”
Wow, how to rate this. Now, I’m easy on movies that I like, I’ll give it an 8.75 (just to be weirdly precise.)

I think the movie is fairly good, if not a patch on the source material. Snyder can’t help trying to turn the action scenes into something “superheroic,” which kinda misses the point, and the whole thing feels rather rushed, but it’s certainly not a bad movie.

This topic was automatically closed after 7 days. New replies are no longer allowed.