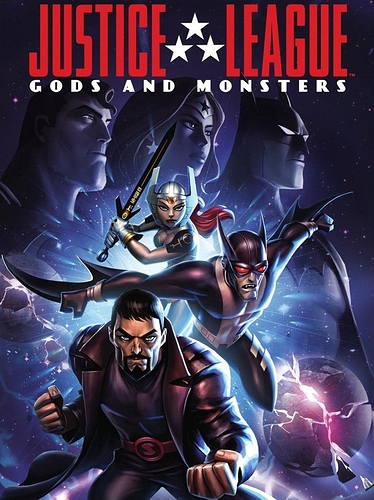 What makes characters last for the majority of a century like the trinity have is their ability to change with the world around them. Since their creations, writers have kept the core of the character alive while evolving and adding to it for a different era or audience, a specific story, or to adapt it from a comic book to the big screen. A very creative example of this with DC’s greatest heroes, Batman, Superman, and Wonder Woman is Justice League: Gods & Monsters. In this we not only don’t see Clark Kent, Bruce Wayne, and Diana Prince we don’t even get Kal El, An Ordinary Human, and An Amazon. This story alters DC canon and reality while still keeping the elements that made these three great characters last so long in pop culture.

This week we are going to discuss Justice League: Gods & Monsters. After you watch it, come back here to discuss and feel free to use these questions:
-Who was your favorite character?
-What was your favorite line/moment?
-What do you think of a Zod as Superman?
-Do you think a vampire as Batman is true to the character?
-What do you think of changing someone from old gods like Wonder Woman to a new god?
-Would you consider this the Justice League?
-What worked about these changes and what didn’t?
-How do you think this compares to other Elseworld stories?

Enjoy the movie and Discuss below!