As you discuss the first season of this amazing show, feel free to use these questions:
-Who was your favorite character and why?
-What was your favorite moment from the season?
-Which episode was your favorite and why?
-How do you feel about what happened to joker in the finale?
-What are your predictions for season two and what do you want to see?

I’m such a huge Harley fan but Frank got me, I love him!! He was just a great comedic role. Ivy’s come back in the season finale and Joker’s reaction. Lol it was perfect! I’ve always thought Joker was a bit afraid of Ivy. The episode they went into Harley’s brain, I thought it was a perfect representation of what Harley Quinn’s brain would be like! I thought Joker going down with Batsy was perfect and if he comes out completely normal looking I really hope we get some White Knight vibes! I’m pretty sure though we are entering No Man’s Land and I’m pretty stoked about it!!!

I completely agree. Frank was one of my favorites too but I think psycho is probably my #1

I love Ivy in this show! The dry humor between her and blunt moments with Frank are hilarious and cracks me up every time. I’d have to say my favorite episode was the finale. I loved how they were able to have serious moments especially with Ivy’s death. Really looking forward to see how everything plays out now that Joker is normal and Gotham is in ruins.

Good news is we won’t have to wait long! I think after every single episode I thought it was my favorite so far.

Outside of Harley/Ivy, I think I’ll go with King Shark. He’s this weird mix of terrifying and adorable and I love it.

Man, there’s a bunch to go with. I think I’ll go with the chase down Harley Quinn HIghway. First, just seeing that not only was it actually built, but built like THAT was amazing, and Cy turning into a “transchanger” was such a WTF moment.

I think I’ll go with “Being Harley Quinn.” I think that was not only great in terms of being totally crazy in what it can do, but also have some real drama and pathos in discovering Harley’s dark secret and how she overcomes it.

I think it’s a great choice to go with the series – we’ve seen Joker looming over Harley this entire season, not just physically, but mentally and emotionally, with Harley trying to beat him to be in the Legion of Doom and then prove her worth there. Now that he’s gone, it’s going to be interesting to see Harley as basically top dog, and how she lives without having that on her.

That said, I’m also interested to see what happened to not just Joker, but Batman – remember they both basically fell at around the same place. I wonder if we’ll get something sort of like what happened to Bruce and “Joker” in Snyder’s run near the end, where they meet as normal people instead of enemies. Could we maybe see them having forgotten their costumed identities and trying to survive in Harley’s new world? 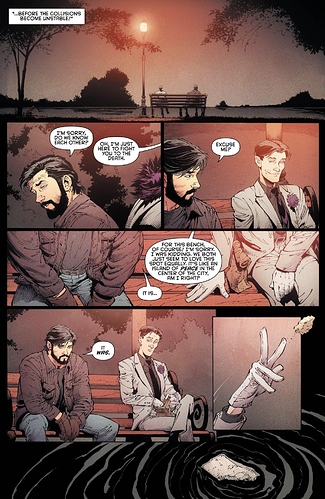 Outside of the stuff with Bruce and Joker that I mentioned, I think we’ll see Harley be the actual Queenpin of Gotham for a while, and through the course of it see her title be desputed both by other criminal forces in Gotham as well as the Bat-Family.

I mean depending on where Batman fell we could end up with a crazy Batman Who Laughs maybe??

Omg what if we get a mash up of

I’m totally down for that crazy tornado of chaos and mayhem!

I think that would be crazy. I also heard rumors that season two will go to space and giving this show that open creativity would be crazy and insane in the best possible way.

I dislike what they did to Clayface. He is a powerhouse character, and in this show he is basically useless and a moron who doesn’t realize what he is capable of doing.

Happy they seemed to tone down the swearing with out abandoning it out right. Infrequency is what makes cursing powerful.

Frankly I didn’t know I could like kite man as a character. So good job…

Ivy is still the best character in the main group, but is a little to together and moderate. Considering most versions I’ve seen paint her as a crazy eco-terrorist that wants all humans gone a plant planet.

Harley Quinn is overall fun, but annoying. I think that’s on purpose though.

The rest of the main cast is there… that’s all I have to say about that.

I have to say I think my favorite scene out of the whole season is when Ivy barges in when they’re live on Tawny in a freaking flower.

-Who was your favorite character and why?
Tie: Kite-Man & King Shark
I’m a sucker goofy characters.

-What was your favorite moment from the season?
When Harley found out about Ivy and Kite-Man!

-Which episode was your favorite and why?
“Being Harley Quinn” a good look into what Harley is all about.

-How do you feel about what happened to joker in the finale?
The Clown Prince of Crime, now boringly sane a fitting punishment. We can forget about him for a while, maybe pop-up when we least expect it.

-What are your predictions for season two and what do you want to see?

Harley will me a guy who survived the earthquake but lost his family. They will fall in love and cause some suspicion amongst the the crew.

Turns out Harley’s Mister Right turns out to be Mister J after an accedental chemical bath.

Joker kills Kite-Man bravely sacrificing himself for the woman he loves.

Ivy and Harley become a couple after putting Joker down for good.

Mr. Freeze since he’s reference twice in season one, maybe as the main antagonist.

That’s pretty much it, keep up the good work!

My favorite character… do you pick favorites among your children? Probably have to go with Bane, he is hilarious. But they all are good.

My favorite moment from the season was probably when Joker betrayed Harley the second time after she joined the Legion of Doom. Seeing her fall with tears, curl into the fetal position, then Batman’s Batplane catch her and his “some things never change Quinn” with Deidrich Bader’s perfect delivery… they managed to hit me right in the feels when mere seconds ago I was laughing. Not an easy thing to do well, but this one did that great especially in the later part of the season.

Special mention to the memory of Harley playing with her dolls, that was funny.

My favorite episode was probably A High Bar. The interactions with Harley and Kiteman and the shenanigans during the bar mitzvah in general was great.

I am neutral about the joker. Seemed a fitting end after him being more or less the big bad of the season. But at the same time, does anyone believe he is really not coming back?

I predict Harley will at least briefly be the queen of Gotham in the beginning, likely before someone takes over and Harley and her Crew have to win it back.

As for what I want to see. I want Catwoman for sure, The Gotham City Sirens should be together for at least 1 episode. I also want to see more characters from the recent comics. Red Tool, Big Tony, Power Girl and Goat Man would all be perfect for this show.

I also am hoping that we see Harley and Ivy get together. Not so much for my personal likes, because I am ok with either of them, they are interesting as just gal pals. But there was a lot of hinting in interviews with the producers and even Lake Bell and Kaley Cuoco that we would get that. And obviously we didn’t in season 1 (I know some argued there was subtext but I found it very small subtext that might not even be intentional) but I know they did season 2 by then also. So I really hope for the fans who want it’s sake they didn’t just pull the trick a lot of shows seem to do now when asked a question like that. Which is hint it heavily without saying yes, or say how much you hope they do, then when they don’t deliver just hope no one remembers it was their interview that got their hopes up.

I realized that people involved in a show are put in a tough spot when given a question like that. But not liking the only way to respond to it seems to be to just imply yes either way. Not real fair to the fans who it would mean a lot to to see.

-What was your favorite moment from the season?
Oh, way too many favorite moments to pinpoint one, but I think the death scene in Episode 12 is probably the pivotal moment in the series. Unfortunately, that wasn’t drawn out longer. It was very powerful dramatically.

-Which episode was your favorite and why?
Episode 12. See above. Death scene, nearly non-stop action. It’s the one episode I’ll recommend to somebody new to the show to watch first. 5/5 stars all the way.

-How do you feel about what happened to joker in the finale?
Joker will be back. He’s the primary antagonist in the show, he has to come back in some way to antagonize and torment Harley & her crew.

-What are your predictions for season two and what do you want to see?
The executive producers teased in DC Daily some of what we can expect. More on Ivy and Harley’s relationship. Perhaps something romantic or deeper and how Kite Man will fit into that. Harley and her crew dealing with the aftermath of the Joker’s destruction. There will be more characters from DC including more significant roles from Catwoman among others. Looking forward to all of this and more.