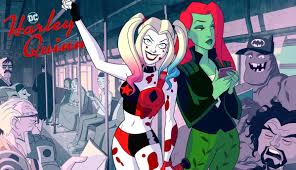 Feel free to use the following questions to discuss:
-What do you think of this version of Harley Quinn?
-Favorite Character?
-Favorite moment/line?
-What DC villain would you most like to see in the series going forward.

Enjoy the show and comment and discuss your thoughts below!!!

This is a great fun-full action packed animated series. I really like it.

Great, an installment I won’t have to make time to watch because I’ve already watched both episodes released so far twice.

I really like this take on Harley – she can be zany, insane and over the top, and yet she still has a vulnerable side to her that I think is part of what makes her so memorable and beloved by readers.

My favorite character so far, outside of Harley herself, is definitely Ivy. I love the dynamic she has with Harley, where she’s the closest human friend she has because of who she was as Harleen Quenzell. Also, when she says how she’s better around people, while she still hates it, she can do it without vomiting, I have to admit, I really, really related to that.

I think my favorite moments so far is when Harley uses her more psychiatrist side to her. In the first episode, when she diagnoses herself, and in episode 2, when she uses it to stop Penguin’s nephew from shooting her, and when she gets Bane, Two-Face and Scarecrow on her side against Joker.

As for what DC villain I’d want to see show up…man, there’s so many to decide, but one that comes to mind that could be really interesting is Ra’s al Ghul. I could see her possibly working with Ra’s as a way to be “bigger” than the Legion of Doom, and I think there could be some really interesting dynamics with Talia, who has similar abuse issues regarding her father.

This version of Harley has all of the same crazy energy that someone can expect, but dialed up to 11. Her story, as well as her relationship with Joker, takes a great chance by stepping away from the norm. No longer is Harley just another supporting character, she’s actively trying to become recognized on her own terms. This all creates an interesting and relatable premise for anyone who has ever felt stepped on or undervalued by others.

My favorite character so far has been Bane. As far as I know, when it comes to TV/Movies, he has only ever been depicted as either a master strategist/adversary or a dumb brute. Seeing such a great take and making him funny and likable is awesome to see. Shout-outs to Poison Ivy, the Riddler, and Kite-Man for being so great as well.

My favorite moment so far would have to be where the Riddler helps Poison Ivy with Harley’s fixation on the Joker. It shows a moment of solidarity rarely seen between villains and makes me like all the characters that much more. How many people do you know that would be willing to set up an elaborate (fake) death trap on TV just to make someone realize their relationship is toxic as hell.

Moving forward, I like the idea of using lesser known villains since it helps them create a foothold in the community that will make them easier to expand later on. Kite-Man is a prime example of a villain that only a few years ago people would laugh at. Now, well they still laugh, but it’s in purpose and that’s what makes him so great. If they’re going to add someone, I would like to see Catman.

This topic was automatically closed after 7 days. New replies are no longer allowed.