So open up your imagination for this, too much for me to actually draw, maybe someone with the time and energy can give it a go.

Figure a park the size of Disney World. But at the center of it all, instead of a castle, is the Hall of Justice. The building can be as big as needed. A section could have a multiplex theater showing various DC movies animation and live action. Main entrance would have on display as in the comic, the uniforms of the JL, and can include really any uniform from heros to villians through out the years. There can also be a auto garage section of a collection of Batmobiles and other super hero / villian vehicles, that one can take photos in. An a section for a restaurant , DC themed of course, could even be like the new Gotham Restaurant that is supposed to open up some place in Europe. An of course other additions to buy misc, shwag and comics. Various offices could be put in off limits to the public that could be used by actual DC writers / artists etc. An other offices available to rent for hosting private business events etc.

Everything else in the park would be your DC Roller Coasters / Rides, Themed Rides like Disney has with its destruction of Star Wars. The themed rides can be taken right out of any comic, pick your favorite, could be a tour through Arkham Asylum, or Park Row, or a tour of Smallville.

Instead of disney characters touring the park, you have your superheros and villians. On top of that, there could be choreographed , interactions between heros and villians in the park itself amongst patrons. ( instead of a typical disney parade ) . Winter could include an ice rink and winter could kick things up with your Ice Villians… why not, and some where for the summer time can be a water park. Which would of course be an Aquaman theme.
Spring time you could have a green themed area, with plenty of foilage for poison ivy, or swamp thing, maybe a butterfly area, in the mix. Penguin is a bit of bird guy, so you could also include an avian section, with trained birds , or birds that kids can interact with.

An of course, over charge the snot out of anything and everything as all theme parks do.

Throw in some parking garages and shuttles , a hotel or two, have a nice day.

I’d rather go to this type of theme park, than a disney , or six flags.

St. Flags St. Louis has the Hall of Justice Ride. It’s a laser tag game where you are helping the Justice League. There are superhero’s that walk around the park. There is a Joker ride. The Mr, Freeze and Batman are a rollercoaster. To get to the ride you walk through the lairs like the Batcave or Mr. Freeze’s Ice cream Factory. The Superman shoots you into the air and crashes you down. I’ve never gotten my husband on that ride. He hates heights. I’ve gotten so many cool Superhero items there. In the game gallery you can win capes. I’ve got a stellar Wonder Woman cape. Dc Plushes, TShirts etc. 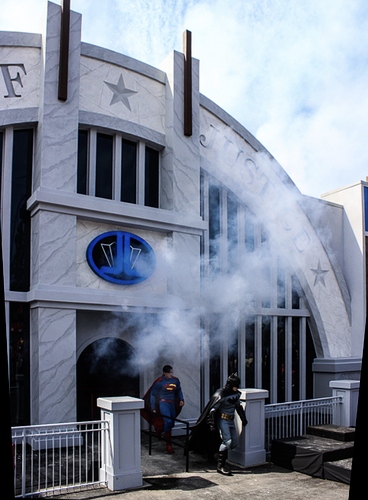 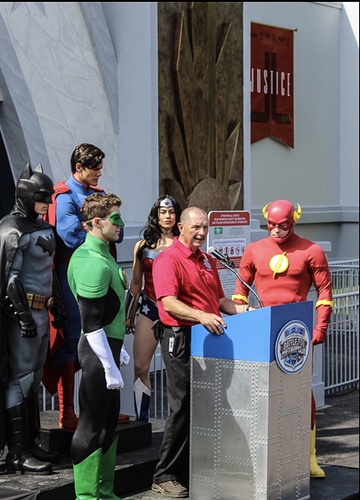 @GLCSector3295 It almost was reality! Neal Adams did sketches for it to be built in Metropolis, IN. Rumor has it the recession and spike in gas prices killed it back in the 1970s. 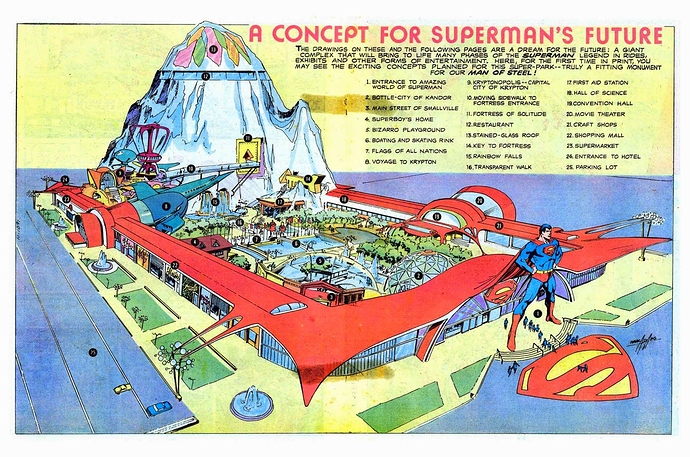 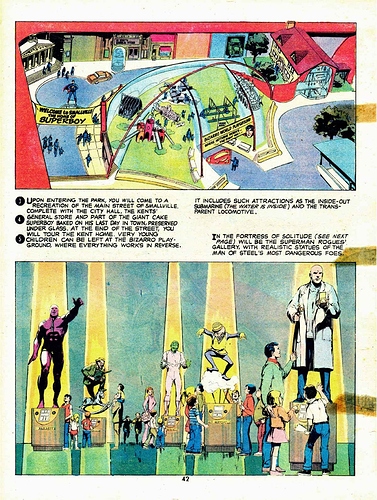 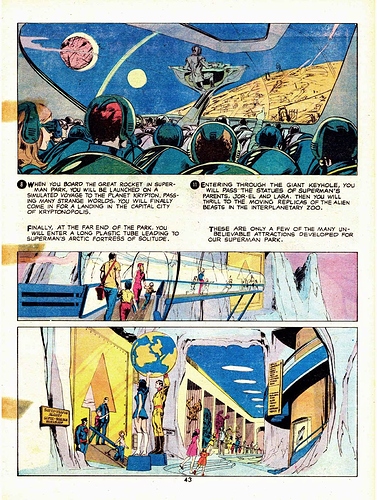 Something man, for real, snatch up all those DC theme rides already out there put em all in one giant place. An get a bitchn Hall of Justice established.

I want a weather wizard roller coaster too, different sections you could get blasted with different elements .

Also it could also be a semi educational park as well as i was saying earlier with the Penguin and Poison Ivy, Big section for birds an plants and keep the theme for each, while making something really beautiful and educational for park goers. Oh also it wouldn’t suck like Disney, you would be allowed to cosplay and bring your own coolers if you wanted too. Feel free to add to this people.

@GLCSector3295 What if instead of lightsabers or wands they have lantern rings that can interact with lanterns to cause projections or animatronics using peppers ghost . Imagine if you could have the experience of getting your ring like the lightsabers at Disney. What if they had little lights and you could put disks in them and they project little images in the color of your ring.

Done, officially added to the park. keep bringing it.

I came up with the idea of a bludhaven shopping district out side the park like Disney has downtown Disney as bludhaven is iconic but couldn’t have it’s own area due to not being interesting enough to most. @GLCSector3295

What if the photos with superhero’s and villain’s were comic book covers and you pose as the other character or civilian, say action comics #1 and you are one of the screaming people in the background. @GLCSector3295

lmfao okay @Beetleborg66 you officially are permitted to not @ me anymore, lol my notifications got lit up with ya I was like Woah.

But yeah all great stuff Beetle, I was also thinking with the hall of justice instead of having a multiplex theater inside, it could be in a different accessible part of the park that could be accessed by park goers or the general public from a different side, that didn’t want to go into the park. Regular movie goers could pay regular movie ticket prices while park goers would have free access to the theater as the price would be included in the ticket purchase. More over the theater could play all DC movies and animated movies pretty much non stop with a few separate screens to play current movies.

Sorry with @ing and great idea, it would definitely bump up revinew as well.

Friggin Mario gets his own theme park via Nintendo but Dc/Warn Bros can’t get it together to pull off the most awesome theme park ?