DC Superhero Girls: The Good, the Bad, and the So-So

As a fan of DC and former fan of Lauren Faust’s work with Pastel Equines… I wish I were joking (look, John De Lancie plays a chaos spirit and Liev Schrieber plays a Yeti modeled after Hasbro Network Executives)… Anyway, I thought I’d watch DC Superhero Girls just to get an idea of how it is. It’s decent. Especially compared to the likes of Marvel’s current animations, but some elements are better than others. Figure I’d go over them briefly.

Lauren has this Archetype she veers for in her works. She reverse engineers characters into her characters from her own pitch, Milky Way & the Galaxy Girls, about roller blading alien magical girls. It was less obvious in My Little Pony because these characters were blank slates, but Babs, Kara, Diana, and the rest already have personalities, so it’s a bit odd to see square pegs put in round holes.

The Transfers are as follows for any who cares:
Batgirl is Pinkie Pie, Batman Fangirl, Burrito enthusiast
Bumblebee is Fluttershy, afraid of her own shadow
Wonder Woman is Twilight Sparkle, fish out of water has to learn normalcy
Supergirl is Rainbow Dash, a tomboy who loves moshpits and shredding on her guitar
Zatanna is Rarity, drama queen fashionista
Green Lantern is… Sam Manson from Danny Phantom, environmentalist but not in a constructive way… Speaking as a socialist, she has a very… 90s Liberal view of environmentalism. She’s not trying to get Lexcorp to stop dumping chemicals, or getting companies to invest in nuclear power (safer than Coal, more fuel efficient than Solar/Air). Reminder: Normal people account for a fraction of the pollution major companies do. If every individual on the planet recycled, it wouldn’t come close to solving any problems.

They work or don’t work to varying levels. You can see I have gripes about how they represent Jessica, but most of the others have spark. Kara as a tomboy rebel is awesome (also voiced by She go, hell yeah). Diana having to learn how to human with a bunch of eccentric ladies is hilarious. And Batgirl being a Batman Fanatic is great. None of them are terrible, not even Ms. Cruz.

I also like the idea that Jim Gordon purposely moved away from Gotham because he loves his daughter. And we see him much more relaxed and less on edge.

The villains were, obviously, more my draw to the show. Harley is great, as both Babs’ bestie and just a maniac obsessed with Joker and destruction. Catwoman is modeled after Ertha Kitt in voice and 90s Animated Series in Suit Design and has a fantastic Roadrunner style chase with Batgirl.

Ivy, I was trepidatious about because the Save Poison Ivy Group on Twitter didn’t like her rep in the series, and normally I agree with them, but I think they made a mountain out of a molehill on this one. Ivy is fantastic. Faye, elemental, and her human persona is such a good contrast (also answering the question of why Ivy is vegan in most media… She ain’t hear, she attacks meat like a wild animal). She also narrates a great segment that gets you on her side with the tree epsiode. And her line on why the Bat Signal works in Gotham is awesome. Here’s the thing: I genuinely believe Ivy should be seen as a hero and inducted into the Justice League as this sex positive avatar of nature… But this is the best Ivy-as-a-Villain content I’ve seen in years.

Sadly, Star Sapphire is the exact opposite. Carol Ferris is supposed to be this tragic character, and she’s reduced to this forever alone stalker crazy ex. I honestly expected better from Lauren. They have a similar issue with Dex Starr, but Dexter was always kind of a joke character, regardless of his tragic backstory.

But then you have Live Wire. HOLY ELECTRIC GOTH GIRL, BATMAN! Live Wire is AMAZING. Perfect update, going from a Howard Stern/Rush Limbaugh style Shock Jock talk show host in the 90s cartoon to a sadistic Internet Prankster obsessed with views, a la Pewdiepie or Logan Paul. She feeds on the worst in people the same as Stern or Limbaugh did in 90s or Paul & Kjellberg do now. And my God, she is such a goth punk QUEEN in her updated outfit. 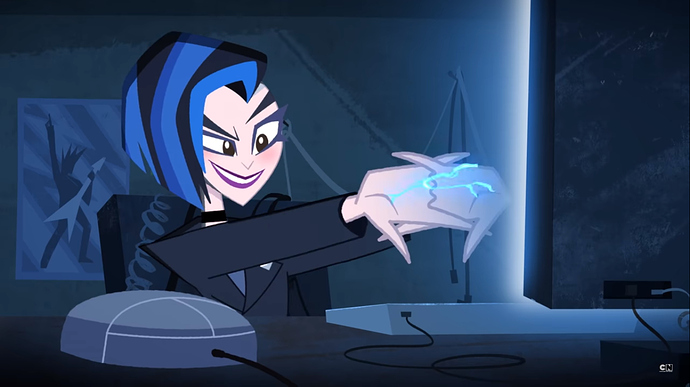 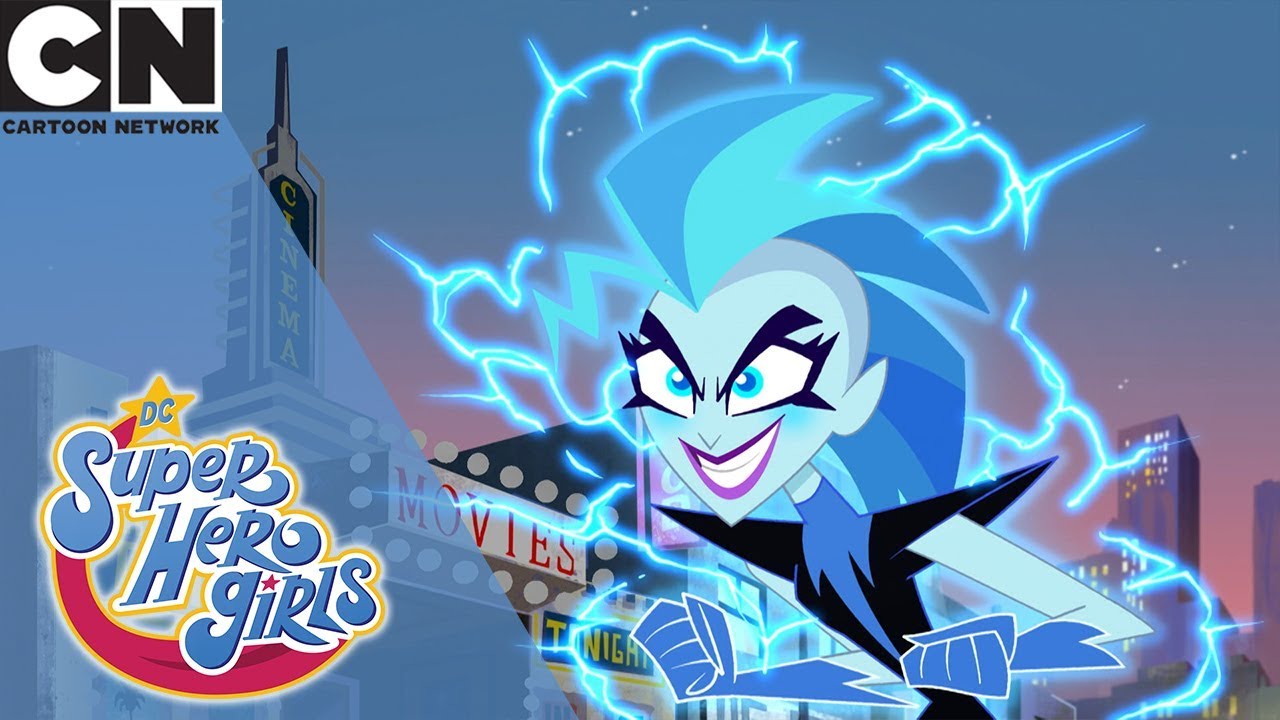 Yes. Watch the show for her if no one else, because as a villain Stan, she is the best one bar none.

So yeah, its a mixed bag. I’d recommend watching the Catwoman Supergirl episode, the Batgirl Ivy episode, the Green Lantern Ivy, the Katana episode, and the Live Wire episode if you want to see if the show’s worth your time. Episodes are only ten minutes long, so its not much an investment. If you don’t like it after that, the show’s not for you. Otherwise, you have plenty of DC awesomeness here. Doom Patrol and Swamp Thing and Harley Quinn.

I really like the show. It’s targeted towards a certain demographic and is not going to get to political.

I think the balance they reached in the core group is really finding characters that can be seen as core personality traits for young people, especially young girls. Giving their target demographic at least one core character they can relate to. I just wish they’d make Kara the Power Girl character she is rather than forcing her into Supergirl.

The “villains” are where they have their fun and can be more interesting and playful. It’s well balanced in that regard. I actually think the Kara, Zatanna, and bunnies episode is a personal favorite. I really adore the way they duu it Star Sapphire character. There was always the one kid in high school that had that crush/ex they could never get over. And Carol is a perfect character to fill that archetype and the fact that Hal Jordan, (famously known as “the man without fear) is totally terrified of her.

The show is just fun and doesn’t take itself to seriously. All in all, as a super heroine cartoon show, they’ve done a great job.

I really dig the show. I’m familiar w/ Faust’s work on Powerpuff Girls, which was always cheeky satire meant for a broad group of viewers—and it always cracked me up. DC Superhero Girls is the same. Don’t agree that’s its forcing square pegs into round holes. It takes one aspect of characters we know and runs wildly and cleverly w/ it in circles. It’s a fun way to spend time.

I almost spit out my coffee this scene w/ Diana had me laughing so hard.

Babs, Kara, Ivy, Jess—I like all of them! I’m also a big fan of Elseworlds, so I don’t mind when somebody plays w/ an IP.

I like the show. Comparisons with Lauren Faust’s other famous show are inevitable, but they both sought to show a group of young girls with diverse, well-differentiated personalities, so some similarities were inevitable.

Star Sapphire has always been classically been characterized as a yandere. I actually found it to be kind of hilarious in this show.

I think it’s cute, and I’ve liked how they’ve brought in lots of characters to world-build. Growing up I had the original teen titans show and it was usually just the same characters so it’s fun that Barry shows up and Hal and so on.

It’s definitely meant for a young audience so I didn’t expect much but I appreciate them doing a show “meant” for girls with a character for everyone to identify with. It was typically the token female character before and the same stereotypes. I love Starfire but still wish there was a diverse group of female characters.