…coming to kick the Anti-Monitor’s ass.

HOW: It’s best experienced on two devices. Use one device to WATCH the show From the CW App or th…

HOW: It’s best experienced on two devices. Use one device to WATCH the show From the CW App or the CW website - be sure to push play precisely at our start time. Use a second device to COMMENT on this topic du…

[Crisis_on_Infinite_Earths_logo] We are officially at the half-way point of the event! Part 3 of this 5-Part epic is bound to leave us on the edges of our seats, pondering the possibilities, while the shows take their winter breaks!

WHAT: Crisis on Infinite Earths Part 3, THE FLASH

HOW: It’s best experienced on two devices. Use one device to WATCH the show From…

And for those of you who love to read–

- just in time for the hotly

side note to the one other person who collects blu-rays even though they probably already know, Swamp Thing, Feb. 11, Titans season two, March 3

I may leave Swamp Thing on DCU for now, but the librarian in me will need Titans.

Random thought about Titans in general, not a specific episode or season, though there might be a spoiler or two. I’ve enjoyed the series so far, and look forward to S3, but the show could be better. I agree with most if not all of the critical comments on previous threads. But the show looks great and has enough great moments, action and interesting characters to keep me watching. I’m very familiar with the source material, but I like how things have deviated and the twists and takes on the di…

Arguably, the crossover, shared universe, super-team, and team-up story were all born in comics-- and on the same day. 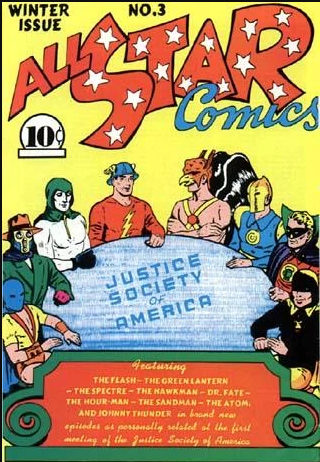 The first meeting of a society of heroes by different creators, even two different if interlinked publishing companies-- and fantasy storytelling was forever changed.

Time passed, one Flash faded, and the baton got picked up by another-- the society gave way to a newer league. And, again DC Comics changed the rules-- Flash met Flash-- and League began to meet annually with Society– 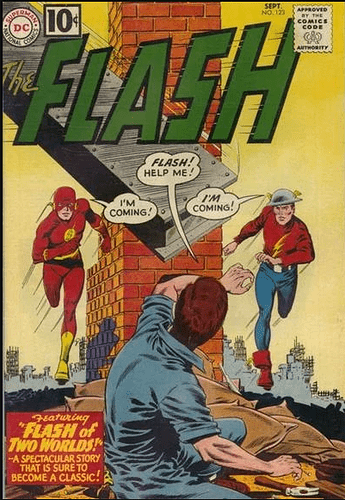 A new CRISIS each year, until the ultimate multiverse changing saga came along 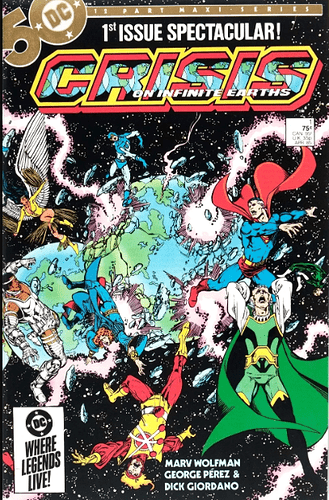 More a cosmic shift to the medium than the overall storytelling worlds, its never been matched, never been duplicated, no matter how many crossovers, great and not always so great, have been done in the intervening years. 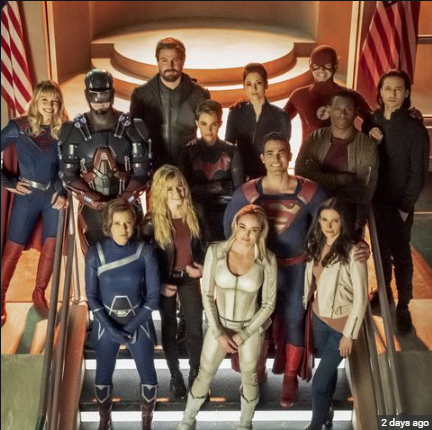 Like its four-color predecessors, the ARROWVERSE is something never quite done before, taking crossovers, team-ups, and shared universes to a whole new level, where any character from any other live action production owned by Warner Bros and based on DC Comics can show up as long as the actors are willing.

It’s their turn to face the

There’s only one thing we can be sure of—

“Worlds will live, worlds will die and nothing will ever be the same”.

It begins tonight, streaming tomorrow on the CW APP. 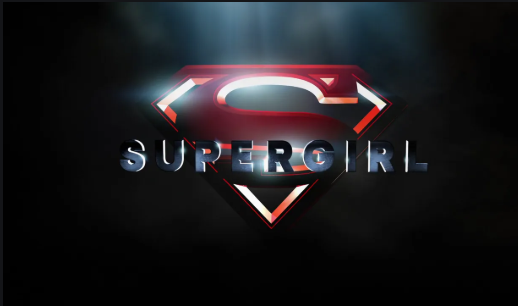 Crisis on Infinite Earths: Part One - The Monitor sends Harbinger to gather the worlds’ greatest heroes in preparation for the impending Crisis.

And if you have HBO–

S1:E3 — Realizing she needs a crew to pull off heists that will attract the Legion of Doom’s attention, Harley attempts to recruit Dr. Psycho (TONY HALE) and Clayface (ALAN TUDYK).

This Sunday, December 8th, what are you going to watch? TV & Originals

poll They’re both on at the same time, so you gotta make a decision. What are ya gonna watch? (And if you stream everything, let’s amend it to what are you gonna watch first?)

Worlds may be dying even as I type these words…

Supergirl was great, but Watchmen…just…man. What a show!

If you haven’t seen SUPERGIRL, now is the time to look away!

Earth-38 is gone. Oliver Queen has sacrificed himself to save a billion lives, and now three billion human and alien refugees have found their way to the Universe of Earth-One. The Anti-Monitor is coming-- and the Monitor’s foresight of the futre has been proven wrong-- how many more heroes must fall to save the multiverse? This text will be blurred 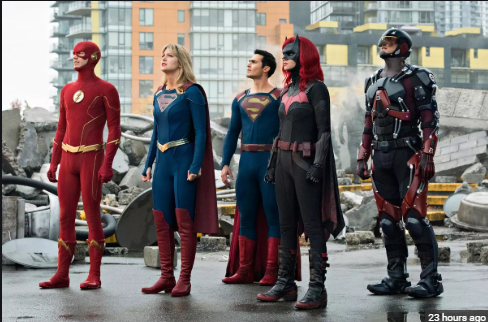 8 | 7c (streaming tomorrow on the CW APP, posting as early as 11 Pacific time)

Crisis on Infinite Earths: Part Two - The group uses Ray’s invention to track new recruits to help save the universe.

The Book of Resistance - Chapter Four

The Red Skies have come– 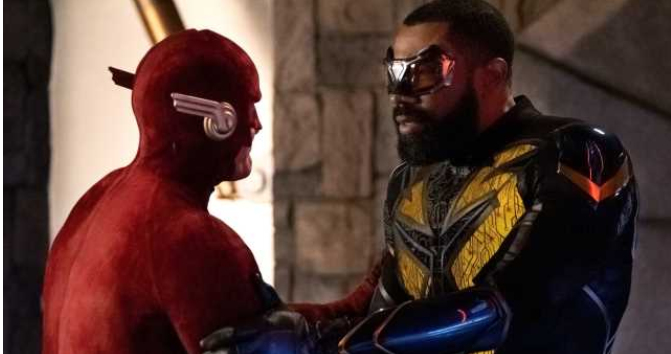 Don’t read this if you don’t like wild speculation!

There’s an obvious and generally ignored plot point that can serve as a reset of sorts-- one that causes me to cringe the tiniest tad whenever anyone got angtsy about Flashpoint-- because the Arrowverse itself is actually a Thrawnpoint, if you will. Trapped in the past before Oliver returns to Starling City, the Reverse-Flash causes Barry to become the Flash eight years early. So time is already distorted on Earth-One, and possibly throughout the mulitverse,

Nathan’s already done a poll, so we’ll just link you to his.

And from the news page…

The end of the multiverse is nigh… 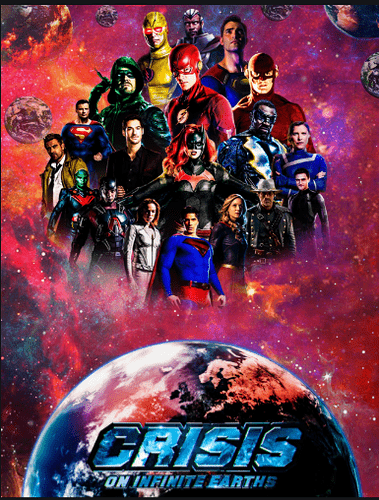 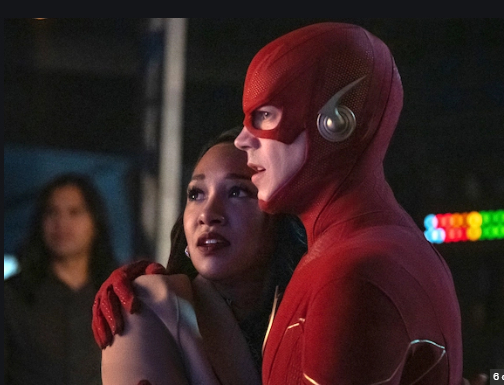 Crisis on Infinite Earths: Part Three - Pariah enlists Black Lightning to help stop the Anti-Monitor after Flash-90 shares what he learned from his battle in ‘Elseworlds.’

Streaming tomorrow on the CW APP–

If the multiverse has survived…

THey just zapped Earth 1, Earth 2, well, we knew that one-- and three fifths of the Pierce family in the anti-matter wave–

Welcome back my Legendary Island of Misfits! I am slowly catching up on the Crisis about us (so no spoilers beyond part 2 please!) and had to comment on seeing some of our Legends in action: Mick Rory is in the house!!! I love when Sara says “my team doesn’t do crossovers.” Classic Legends! “You had me at beer.” I like that Mick seems to be the only one to quiet down Superb…I mean Jonathan. Mick is reading his novel “Caged Passion” to the kid. It’s kid-friendly since the kid likes it. I wou…