Back when DC announced that they were bringing back the Showcase shorts included with their animated movies, they also announced that it would be capped with a larger movie release called “Batman: Death in The Family.”

Today, DC released details of this animated adaptation of the iconic/infamous event and it’s…not at all what I think most of us expected. In a lot of ways it’s a prequel/sequel to their iconic Under the Red Hood animated movie, with Bruce Greenwood and John DiMaggio reprising their roles as Batman and The Joker, but it’s also DC’s first foray into interactive movies.

As the movie goes, you as the viewer get to make choices as to where the story goes, and your choices determine how the story will end.

I don’t know about you guys, but this actually sounds really cool and I’m pretty excited for it. I’m just curious as to what mayhem this will cause in the DCU WALs. WOW!!! I really love this. I especially love that they’re using the voice actors and animation style from Under the Red Hood. That was my first DC Animated movie and it’s what made me fall in love with comics. So much nostalgia and love coming from this.

It’s also cool to see Red Robin get some spotlight outside of the comics. Tim was always my favorite. Overall just can’t wait to get my hands on this. Thanks for sharing!!!

It’s also cool to see Red Robin get some spotlight outside of the comics. Tim was always my favorite.

Hate to burst your bubble, but that’s likely Jason under that costume. It looks like depending on the choices you make, Jason in the modern day will be in a different costume (which is why he’s also wearing some form of the Hush costume). It’s a reference to the series Countdown, where Jason came back from an alternate Earth wearing that Red Robin costume. 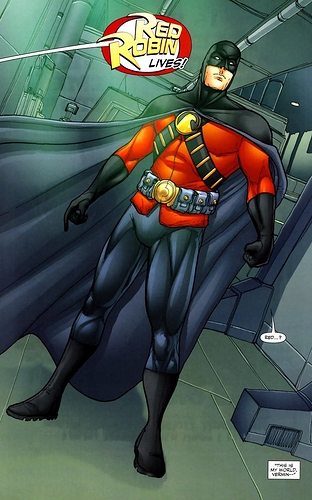 Well, shucks! Oh well, I’m excited to see the costume on screen nonetheless. I like Jason well enough anyways haha! Thanks for educating me and sharing. I am in awe at your knowledge!

Oh I want to play!

Yeah, like I said, I wonder how we would handle this one for a WAL, because it looks like it’s on a Telltale Games style timer, so how would that be handled on our end? Only option I can think of is the host watching beforehand and seeing up polls to pop up just before the initial choice.

A round of applause for the people who worked on this.

I was totally not expecting it to be interactive but I am still SO looking forward to this.

I want to be excited for this so badly, but why oh why are they revisiting Under the Red Hood without Jensen Ackles? I get that he didn’t voice younger Jason, but this is clearly showing adult Jason as well and reinterpreting things that happened during the main events of the movie. Under the Red Hood did a lot of things right, but Ackles’ performance will always be the standout aspect for me, and it’s just completely baffling that he’s never been brought back to play Jason, especially when he’s still apparently really passionate about the character

Was not expecting this and I find it a weird move but I welcome it. If any storyline were to get an interactive choose your adventure style it makes so much sense to make it Death in the Family

but why oh why are they revisiting Under the Red Hood without Jensen Ackles?

Yeah, that was kind of a decision, since Ackles was definitely a highlight of the movie, but I’m willing to give the younger Jason actor a chance.

I noticed in the end of the trailer it says INTERACTIVE EXPERIENCE AVAILABLE ONLY ON BLU-RAY meaning the Digital version may just be a series of pre-determined choices or, my guess, self-branches off ala the home-video release of Clue. I imagine what we see on this service, if we get it (I haven’t noticed any of the other Showcase shorts on here), would be the same as the digital release.

I guess, but it’s still gonna be a glaring absence. I just think that if they couldn’t bring him back for the role (or didn’t want to for whatever reason), then this should’ve been set in its own continuity

Huh, I hadn’t noticed that. That would be the simplest option, though kind of unfortunate (after all, Netflix was able to do several interactive movies like this).

As for the other digital shorts, they’re probably doing what they did with the previous batch. All those shorts (The Spectre, Jonah Hex, Green Arrow) were grouped together with the larger Superman/Shazam: Return of Black Adam feature. That means we’ll likely get Sgt Rock, Death, Adam Strange and more with the Batman: Death in the Family release.

That will be … hectic. Not sure what I think yet…

Personally, I’m excited about this. It’s great to see DC pulling from Under the Red Hood, which in my opinion remains one of the best animated adaptations they’ve come out with. But also, using the Death in the Family story as their first attempt at an interactive movie is a really neat way of preserving the “telephone vote” controversy that went hand in hand with the original comics. Kinda feels like history repeating itself

At first I thought it might of been a fan made thing, then realized what it actually was! I can’t wait for this, I’m hoping we get a special feature of this on the new Superman Blu Ray that comes out soon!

It will be interesting to say the least. We’ve seen a few other movies like this over on Netflix. To me it all seems very gimmicky, ill watch this of course but I hope the chose your own adventure doesn’t continue after this movie.

That’s fair. I certainly wouldn’t want EVERY movie to be like this, but I think it is pretty cool to see them experiment and try something new with their brand.