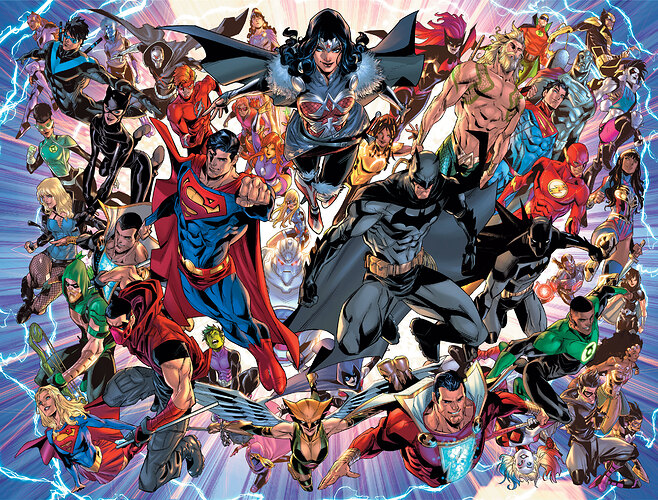 While Future State offered a thrilling glimpse of the near and far futures of DC’s heroes and villains, fans can’t help but wonder what’s next, and the status of the current DC Universe. That era started in a big way today with Infinite Frontier #0, a 64-page one-shot from some of DC’s most innovative creators—setting the stage for new storylines, surprises, and mysteries unfolding over this year and beyond.

In Infinite Frontier #0, when our heroes saved the DC Multiverse from Perpetua in Dark Nights: Death Metal, everything was put back where it belonged…and we do mean everything! All the damage from all the Crises was undone, and heroes long thought gone returned from whatever exile they had been in.

Most of them, at least. The story isn’t over! Infinite Frontier #0 was just the beginning!

In this summer event, Alan Scott, the Green Lantern from the Justice Society of America, has noticed some of his allies are still missing in action, and he’s determined to find them. There are others, though, that would rather remain hidden than explain themselves, like Roy Harper, a.k.a. Arsenal, a man who should be dead now is not. Plus, what does all this mean for the DCU’s place in the Multiverse? On opposite sides of a dimensional divide, both Barry Allen and President Superman ponder this question. Not to mention the Darkseid of it all! Or a team of Multiversal heroes called Justice Incarnate!

But let’s not get ahead of ourselves. Like most stories, this one starts with a crime: someone has kidnapped Jade, Green Lantern’s daughter, and the old hero and his son, Obsidian, will stop at nothing to get her back. This brand-new event from DC has one foot in the past, but both eyes looking forward to a future that they hope will remain as bright as it seems! 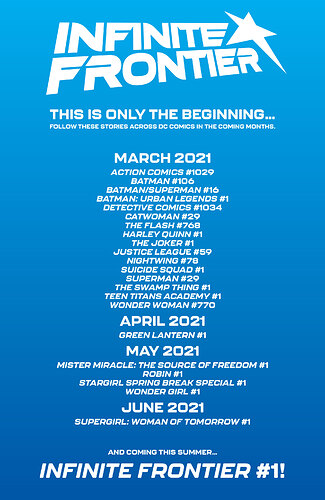 Infinite Frontier, a new six-issue miniseries by Joshua Williamson and Xermanico with covers by Mitch Gerads, launches on June 22nd. And grab yourself a copy of Infinite Frontier #0 today!

Are you looking forward to Infinite Frontier? Let us know in the comments below!

I’ve been thinking lately about how the title of Infinite Frontier might be seen as a play on Darwyn Cooke’s “New Frontier…” I wonder if that 's intentional? And if so, what does that mean?

I instantly thought that it was a callback and homage to “Infinite Earths” and “New Frontier.” With Infinite being the ultimate continuity reset and Frontier being a classic out of continuity cornerstone to the heritage of the DCU.

Well, you guys gave me a good reason to resubscribe next year, can’t wait to read them when summer comics comes 6 month later!

@Reaganfan78 and I appear to be in the same boat - we’re reading these beauties here on DCUI and the six month delay is both close and yet so far away! For us Infinite Frontier #1 will be a wonderful Christmas/Hanukkah/Kwanzaa/Festivus gift arriving here in late December!

This looks great and I’m hoping that Hawkman is one of Alan Scott’s colleagues that he goes in search of. After all, what’s a Justice Society of America without Hawkman?!?

A big question I have – have other Sanctuary characters besides Roy returned? I hope so! It would be kind of sad if they only brought back the one readers care about, and all of the DC characters were still fine with things.

Still waiting on the return of Alfred, myself.

I’ve been thinking lately about how the title of Infinite Frontier might be seen as a play on Darwyn Cooke’s “New Frontier…” I wonder if that 's intentional? And if so, what does that mean?

I can’t speak for DC’s mindset, but when DC: The New Frontier was featured in the Justice League Book Club a few weeks ago, it was absolutely an intentional play/reference to Infinite Frontier.

As for the IF mini, it’s on zee list!

I’m with you. Surely Alfred will reappear soon. I am actually a bit surprised we have not seen him already.

I was so thrilled to see Jason was one of the people Roy considered calling in Infinite Frontier! I love their friendship and I hope they’re reunited soon! Honestly, Jason could use some good news! It would be fun to see Jason, Roy, and Dick on an adventure together.

To quote Conner Kent from several years back: “Darkseid is… toast!”

At the end of Infinite Frontier #0, Darkseid killed the Quintessence, as well as their servant, the Spectre. There should be consequences for this, and I’m not talking about just the heroes of the multiverse rising up against him. Nope. I’m talking about COSMIC consequences!

When you kill beings of the power level of the Quintessence, their deaths will reverberate throughout the multiverse.

Highfather’s death will be felt on New Genesis, bringing the most powerful of the New Gods into play. And consider this: if Darkseid got a power boost with the rebirth of the multiverse, logic dictates that the rest of the New Gods were “boosted” as well.

Hera’s death will echo all across Olympus, so the old gods will now become involved. Since they’ll be going up against a boosted Darkseid, I imagine Hephaestus will be creating weapons capable of torturing and killing Darkseid.

Then there’s the deaths of the Phantom Stranger and the Spectre to think about. Both are agents of the Christian God, both seeking redemption for past sins and granted amazing power to fulfill their respective missions, so they’re “special” in God’s eyes. Darkseid will soon be seeing a literal Heavenly Host winging his way.

Darkseid’s latest affront to a cosmic power level being happened in Infinite Frontier #2. In that issue, he usurped the power of one of Nekron’s black power rings to bring Roy Harper into his fold. From the symbol that appeared on Roy’s costume, Darkseid replaced Nekron’s “death power” in the ring with his own omega power. As jealous and spiteful as Nekron is of life and living beings, he’s not going to take too terribly kindly to Darkseid’s action.

It seems Darkseid is so confident in his power and supremacy that he’s not concerned about who he insults and angers. One has to wonder how ridiculously and stupendously stupid Darkseid, the heretofore ultimate coolheaded planner and plotter of the DC Universe, has become. Have his new power levels really blinded him to the consequences of his actions? Further, one has to also wonder what other cosmic entities he’s going to challenge and basically piss off next.