DC’s Action Comics and Superman Have a New Creative Team! 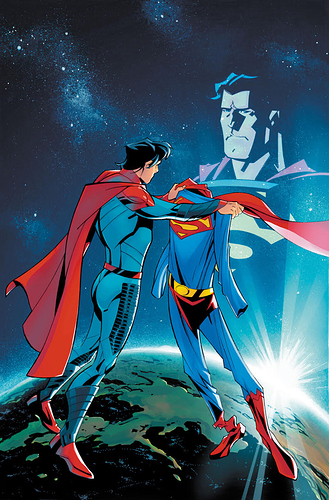 Writer Phillip Kennedy Johnson (The Last God, Future State: Superman: Worlds of War) flies from DC’s Future State event in January and February back to the present DCU in March to join artists Phil Hester and Eric Gapstur for a two-part story that spans both Superman and Action Comics!

Johnson’s love for Superman started with one of the most iconic actors, Christopher Reeve, and he aims to carry that love into the two-part tale “The Golden Age” in March 2021.

The first part of “The Golden Age”, with the back-up series, “Tales of Metropolis”, will be released on March 9th in Superman #29, with part two coming in Action Comics #1029 on March 24th!

Read what Johnson had to say and see exclusive artwork from the two issues in our News article on dccomics.com!

What do you think about these epic pairings? Are you excited for the next chapter of Superman to come out? Let us know in the comments below!

This sounds great! Looks great too.

I’m excited for a Superman series with a little more Jon in it.

What do you think about these epic pairings? Are you excited for the next chapter of Superman to come out?

I’m always excited for the further adventures of Superman, The Man of Steel!

Tales of Metropolis sounds like fun too, especially since it starts with Bibbo!

Super excited to see where this goes! I usually don’t read the Superman comics when they first come out, but now seems like a pretty good time to jump in!

Not very encouraged based on the description of the first arc (I have zero interest in Jon taking over as Superman), and I’m not sure we need another writer fawning over the Reeve films (no disrespect, but I think that gets a little out of hand sometimes and can alienate readers who had other entry points to the character). We shall see.

Kinda looks like they’re killing off the OG Superman for good this time, and Jon will take his place as the new Superman. Not sure how I feel about that.

Beside the costume with no red trunks, I’m ok with Jon being the next Superman. It was bound to happen sooner or later.
Superman can’t really live forever, he was long gone longer before Legions of Superheroes happen.
With 80 years of history under his belt, how far can DC goes by keeping the story fresh and entertained? I hope for the best, if they tell a great and interesting story of the new Superman, I’m for it.

Don’t threaten me with a good Superman story.

I have no idea who Phillip Kennedy is, but I will buy and read this anyway!

You can’t get mad a circular story telling but are then outraged when something changes.

There were a lot of great stories generated when Dick Grayson was Batman. I look forward to new and different stories coming out with Jon Kent Superman.

Once again Conner Kent is left out in the cold. I could be wrong, won’t know til I see it but the track record of safely shuffling off the “Illegitimate” kid is strong. Batman took his tank grown son in and treated him as his own. Superman always distanced himself from his though. Now that Supes (should) remember Kon-El’s existence, I hope he is featured in this arc… prominently. I have no problem with Conner taking up a different mantle (ala DG), but if he does it should be made clear that’s what he chose to do.

Bah. I was hoping the rumor about Mark Waid taking over Superman was true.

Phillip Kennedy Johnson was on the Word Balloon Podcast talking about his plans and I am even more excited to see him take over the character now.

Yeah, I’m going to be jumping on this title when it premieres on DCUI.