The bracket is made, and the pieces are set…the time has come for the return of Round Robin! 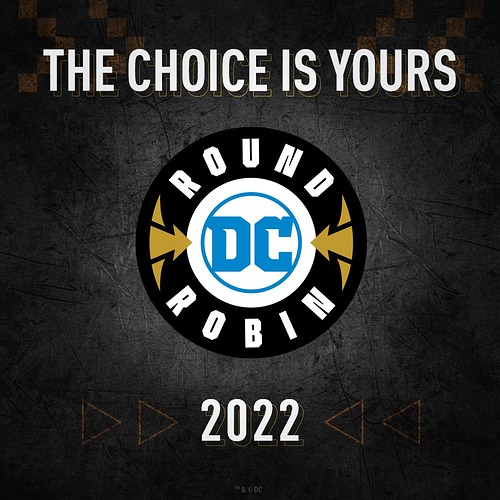 THE CHOICE IS YOURS!

For those who are unfamiliar, Round Robin is where DC Publishing asks you, the amazing DC Community, to vote on 16 different stories to determine which one will be made into a complete series. Each week will feature new rounds of voting, until there is a single victor! So sit back, grab a pen and paper, and let your voices be heard–Round Robin 2022 has officially begun!

Read on to view voting options for Round 1! 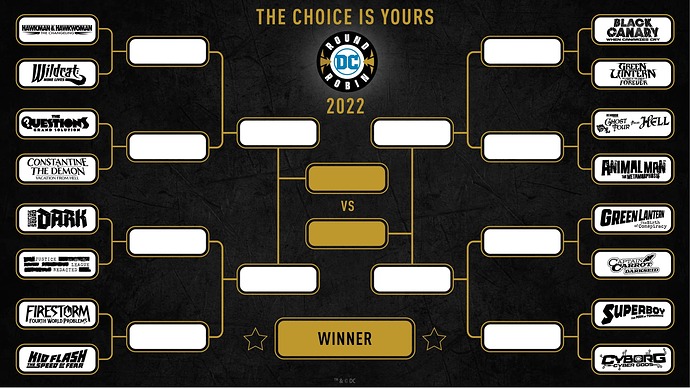 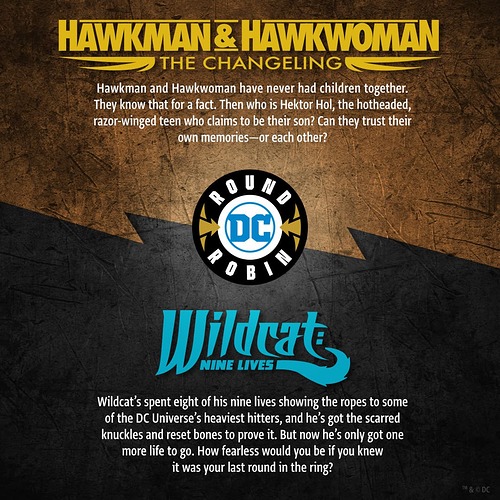 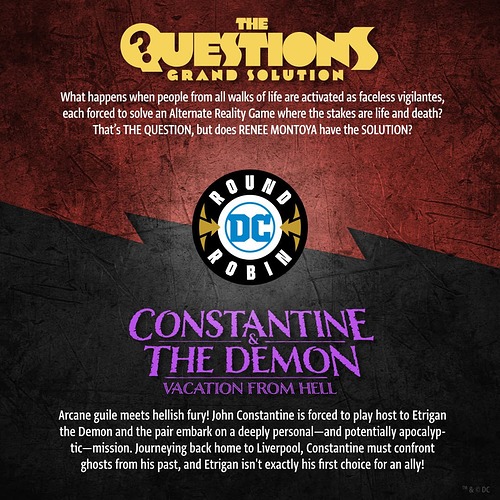 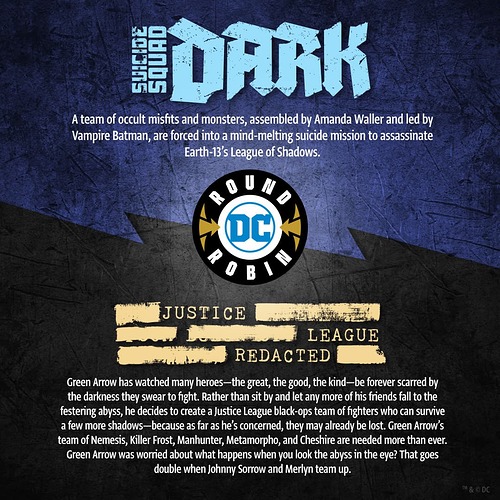 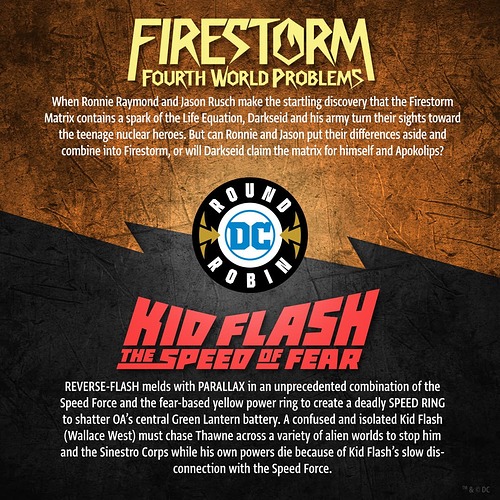 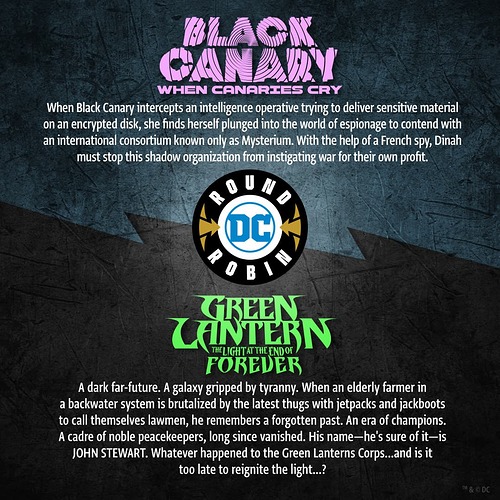 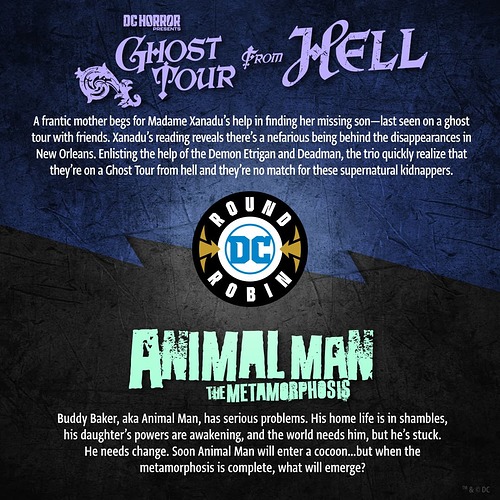 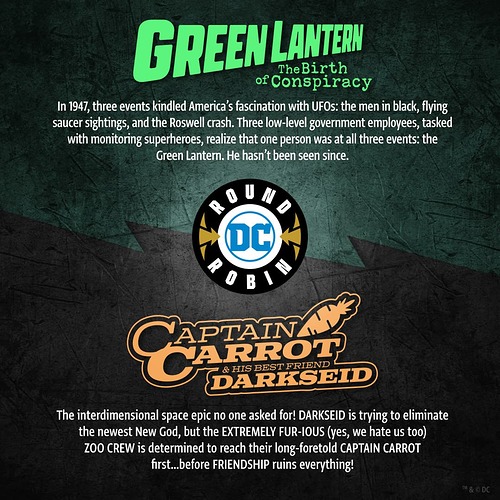 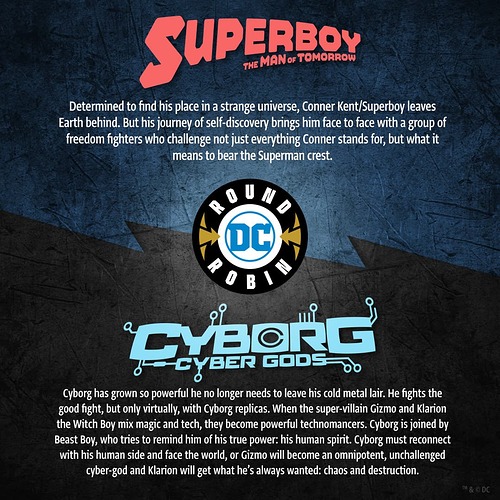 After voting, jump into this thread to discuss your favorite picks with fellow DC Community members! And of course, come back next week for a NEW round of voting!

For the chance to cast more votes for your favorite stories, make sure to check out the DC accounts for Twitter and Instagram!

Eh. Never liked this idea of letting inmates like me run the asylum, and of course my top 2 are immediately competing. Sorry Wildcat. 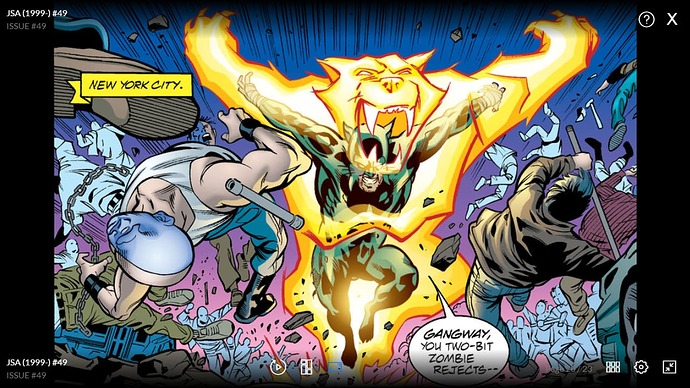 I’m so disappointed this is being brought back. It honestly feels cruel for DC to tease all these potential titles that sound really exciting when we know the winning title is almost certainly gonna be either Suicide Squad or Justice League (probably the former in this case). After all the backlash this tournament got last year, it just makes no sense to do it again. I could get behind this if all these books were being released and we got to vote on which one came out first, but not a format where almost all these titles will never see the light of day

Louder for the people in the back!!

If that fails, for @MatthewHecht I’m rooting for Hawkman! 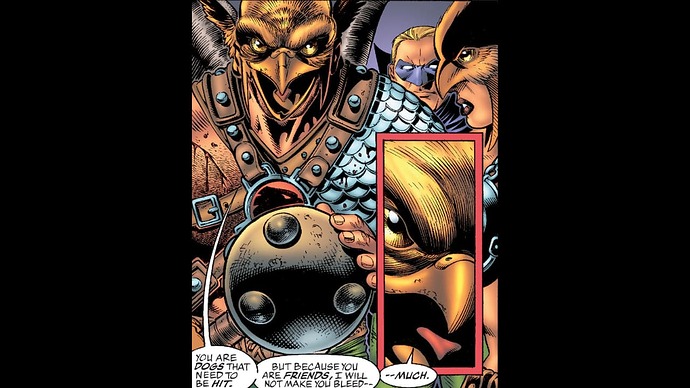 After all the backlash this tournament got last year, it just makes no sense to do it again.

A lot of the backlash was around the ways that we calculated votes and the fact that community’s votes weren’t counted until the final round of the proceedings. Community is now involved from round 1 all the way through to the end of the voting after some internal conversations, which I think is a big win for us.

I could get behind this if all these books were being released and we got to vote on which one came out first, but not a format where almost all these titles will never see the light of day

Many magical things happen at DC, I don’t think it’s ever fair to truly say ‘never’. My favorite example of this is from The Joker (1975) where the final issue (#10) was eventually published over 40 years later in 2019 after the Xeroxed pages of the issue were found.

The point of the Round Robin is that so many of these stories sound incredible from the start to give everyone a fighting chance regardless of who the characters are or what the series is!

I am so happy to see this again! Some of these choices were so hard!

My top two right now are The Questions: Grand Solution and Kid Flash: The Speed of Fear. But they all sound so good!

I hope DC pays attention to how much we like all of these and hopefully the losing ideas can still get used somewhere else, like some did last year. I wish all of these could get published but I know they won’t. I’m just happy to see all of these idea and to get a chance to choose!

A lot of the backlash was around the ways that we calculated votes and the fact that community’s votes weren’t counted until the final round of the proceedings.

That is nice to hear, though I was referring more to the backlash this got from DC fans all over, not just from the Community. And after seeing the initial reactions to this announcement, I know I’m hardly alone. Of course I know the mods don’t have control over these decisions, but I still just have to vent in general

Uggh, I hate these. Most of those books seem 1000 times more interesting then a 50th Batman book, but we’re only getting 1 of them.

Thanks to last years contest we know now that the winner of the contest gets a six issue miniseries which will pop up about ten months down the line and be a digital first series available for DC Universe readers.

Honestly…I have trouble developing any excitement for this. the Digital First selections ever been a weak point and despite the pitch ‘New Issues Daily’ We rarely have more than one going on at the same time.
Doing all of this for a single winner to release a six issue story so far into the future…I don’t really have the hype.

Now if DC was releasing more digital first content on a semi regular basis and was using these Round Robins to draw people into getting a subscription months before they saw physical release id be all for that. Heck if the round robin was used to determine a sort of release order for series with them all getting in id be estatic.

But being what it is…

Can we have both The Questions and Black Canary?

More than ready for Conner Kent to get some much-deserved spotlight again! Superboy is the series I’m rooting for!

I hear you. Right off the bat I’m asked to vote on the 2 books I would like to read the most: Cyborg and Superboy.

Guess I’m voting for Cyborg, just because I haven’t really seen him in anything lately.

So many good books. I really would love to see them all. Superboy forever though. All that trouble being brought back its time to do something with him.

Ghost Tour from Hell, Suicide Squad: Dark, and Green Lantern: Conspiracy all catch my eye but it does seem odd that of all these interesting ideas that only one of them can make it to publishing. I’m still hoping that the Zatanna solo series from last year can come to life, it made it into the top of one of the brackets but didnt take the grand prize, and with concept art being shown off, writers and artists selected, I hope theres a chance that some of those series can still break through. My girl Zatanna would do so well with a solo series! She’s grown so much as a character since her last solo outing in 2010.

I am contractually obligated to support The Questions. 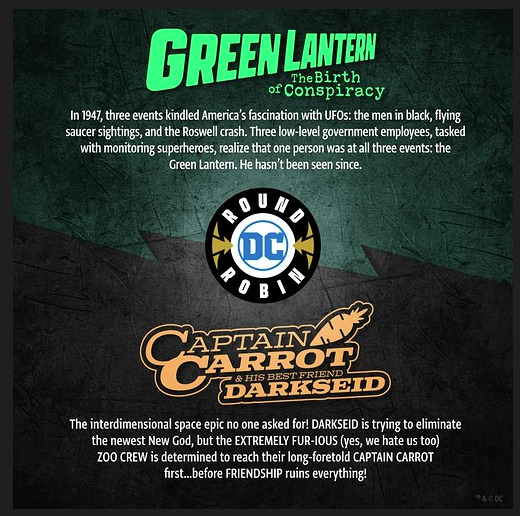 Also, while I love Green Lantern stuff, I am also contractually obligated to vote against anything that perpetuates the debunked Roswell conspiracy theory, so Captain Carrot it is, I guess –

Stories that people have been asking for for so long are locked behind a stupid vote. The backlash isn’t over how votes are tallied. I doubt you personally have any real say in this but it’s so disheartening to fans to see these awesome ideas for stories and then have them ripped away from us.