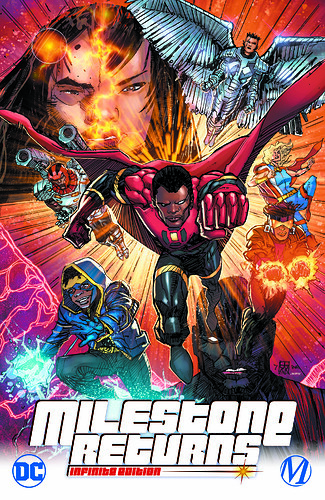 Following 2020’s surprise panel at DC FanDome Hall of Heroes, DC today announced more details on the return of the fan-favorite Milestone universe of characters from the city of Dakota.

“Since the FanDome panel, Reggie [Hudlin], Denys [Cowan], and our editorial team have been working incredibly hard to bring this new Milestone to life,” said DC publisher and chief creative officer Jim Lee. “It’s been exciting to see fresh and contemporary takes on the Dakota universe coming together; I think that both new fans and old will be pleased with the results.”

In addition to being one of the co-founders of Milestone Media, Denys Cowan is a legendary comic book artist with a prolific DC pedigree, providing art for series such as The Question, The Question: The Deaths of Vic Sage, Batman Black & White, and Dominique Laveau: Voodoo Child. Reginald “Reggie” Hudlin is a partner in Milestone Media, as well as an Oscar- and Emmy-nominated film and television producer and director. His comic book credits include award-winning runs on Black Panther and Spider-Man for Marvel.

Check out the full story on DCComics.com News now!
Now for an amazing first look at some beloved characters! 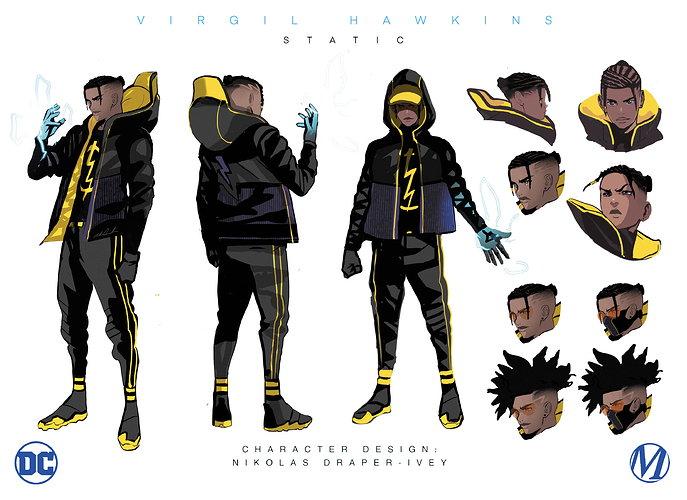 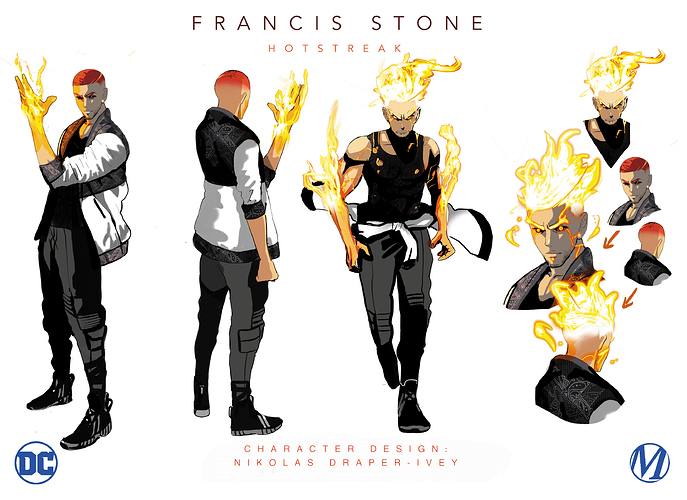 Are you looking forward to the return of Milestone? Let us know your thoughts in the comments below!

I am brand new to Milestone, but this looks good.

Look forward to reading these comics, it’s been awhile, since they were cancelled.

I missed Milestone the first time around back in the 90s, I won’t this time.

And I actually like the look of Static for once…

From the print edition solicitation: 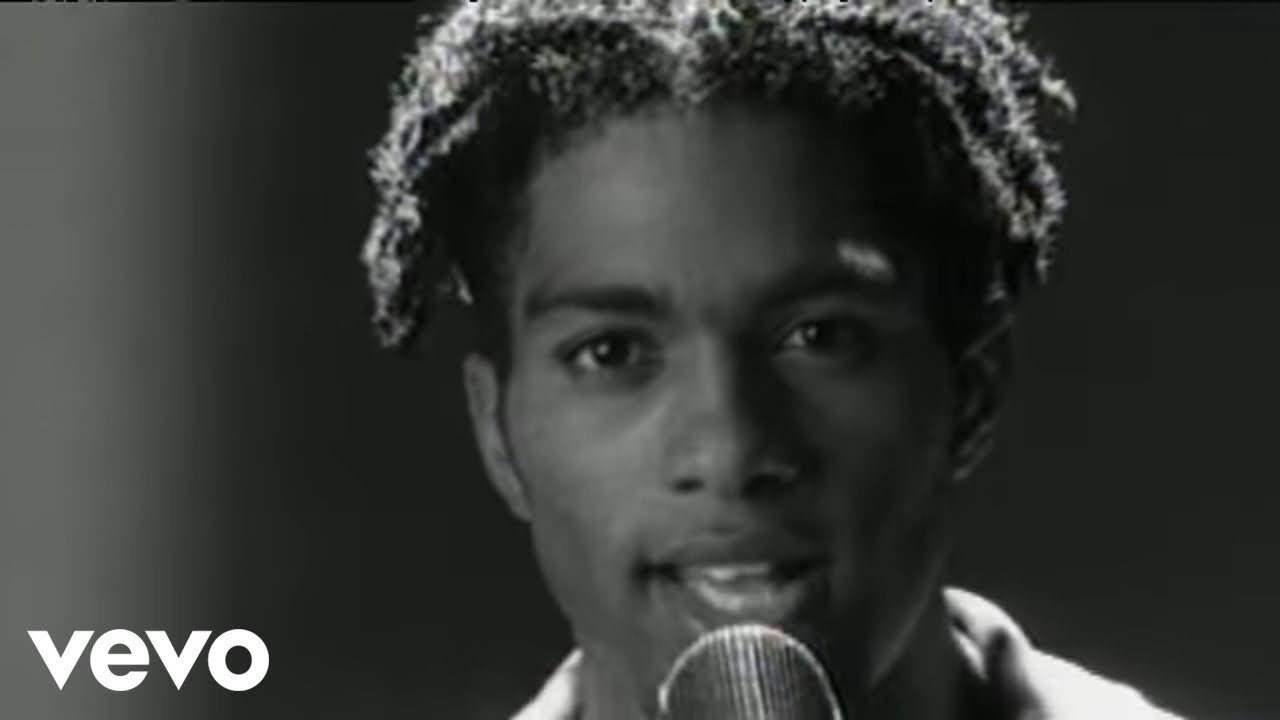 So much talent launched Milestone, glad to see it back with some of the founders 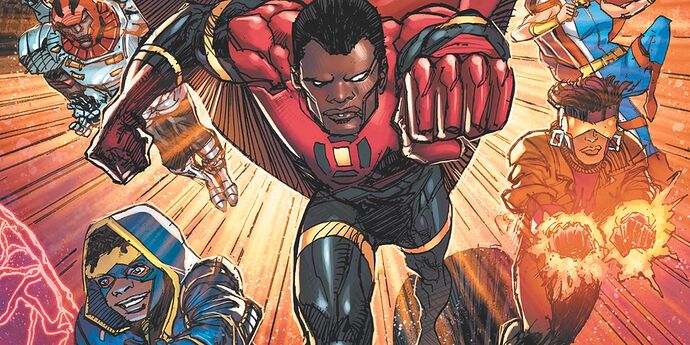 The relaunch of Milestone Comics will reframe the 'Big Bang' event that led to the birth of several metahumans as a police brutality protest.

In this monthly miniseries (20 pages per issue), bullied nerd Virgil is gifted with incredible electromagnetic powers in the wake of the Big Bang. Now he finds himself caught between an over-militarized police response to Black kids getting special abilities and some of those kids who are using those powers in dangerous and destructive ways. But when the bullies who terrorized him before the Big Bang show up with powers of their own, can Static be the hero that Dakota needs?

Static launches Monday, April 12. Each 20-page issue will be available on participating digital platforms for $3.99.

Yeah, back in the 90s none of the Milestone comics were interesting to me. This time around though, surprisingly all of it’s interesting to me. And so far it looks as though it’s just a few tweaks here and there. I suppose that’s all it took to get me onboard.

These two character designs (re-designs) that we’ve seen so far are perfect. They look like they’re wearing Nike All Conditions Gear or something. Again, perfect.

And a self-contained Earth M.

I love, love, love that. I love that DC has the Multiverse. It makes so many things possible, and lots of times better; DC’s Black Label for example.

I guess these are now my most anticipated comics.

Will check it out for sure.

Just read it, it’s laying an interesting foundation to build on.

To be honest I am a tiny bit disappointed because I thought the new static title was going to be released this month but looking back at things, I think I misunderstood the plan.

Anyway, I am glad to know the official release data and I am happy to wait.

It’s been about six years in the making at this point. With the pioneering spirit of the late Dwayne McDuffie in mind, three leaders team to revive the first prominent black-owned comic-book publisher.

I imagine changes in creative teams may be the cause for the delay. 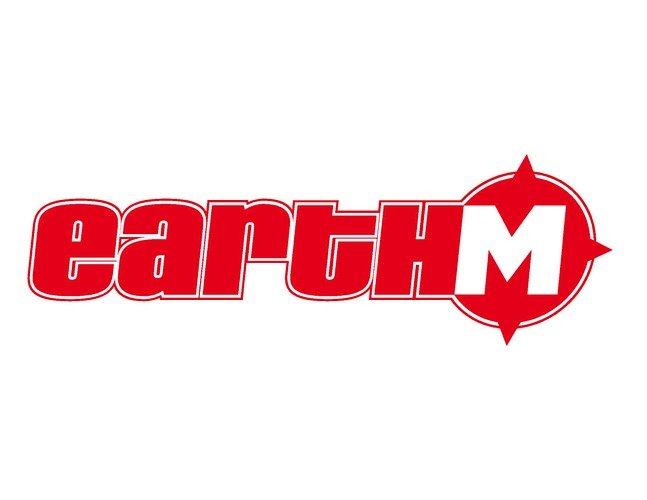 And Reggie Hudlin and Kyle Baker were going to do a Static series. Now I believe that’s just going to be an original graphic novel.

There were also other series. Unless those have been scraped we’ll most likely get them as we go forward.

Sanford Greene is rumored to be working on something at Milestone.

As for what we are getting… 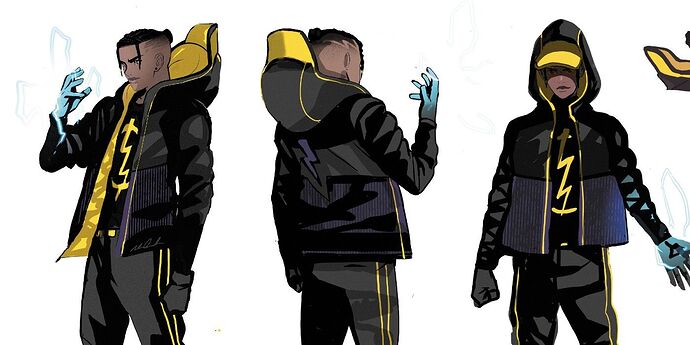 Static Gets a Redesign and New Costume for Milestone Revival Thrilled to say that I’ve contributed to the MILESTONE RETURNS one-shot that’s out on February 26th– I’ll be involved in the NEW relaunch going forward. More announcements on the 26th!! It’s an honor be working with @reghud @ConroyForReal @DenysCowan and @Marquis_Draper! TY!⚡️⚡️

Thrilled to say that I’ve contributed to the MILESTONE RETURNS one-shot that’s out on February 26th– and that I’ll be involved in the NEW Milestone relaunch going forward! What am I doing?

Stay tuned for the announcements on the 26th!! It’s an honor be working with @reggiehudlin @denyscowanart and @marquis.draper. There is so much I want to say and answer to, but I’m happy to see most of the feedback on Static and Hotstreak has been positive. The best is yet to come! I’ll do my best. Gotta get back to work! ⚡️🙏🏾🔥⚠️ 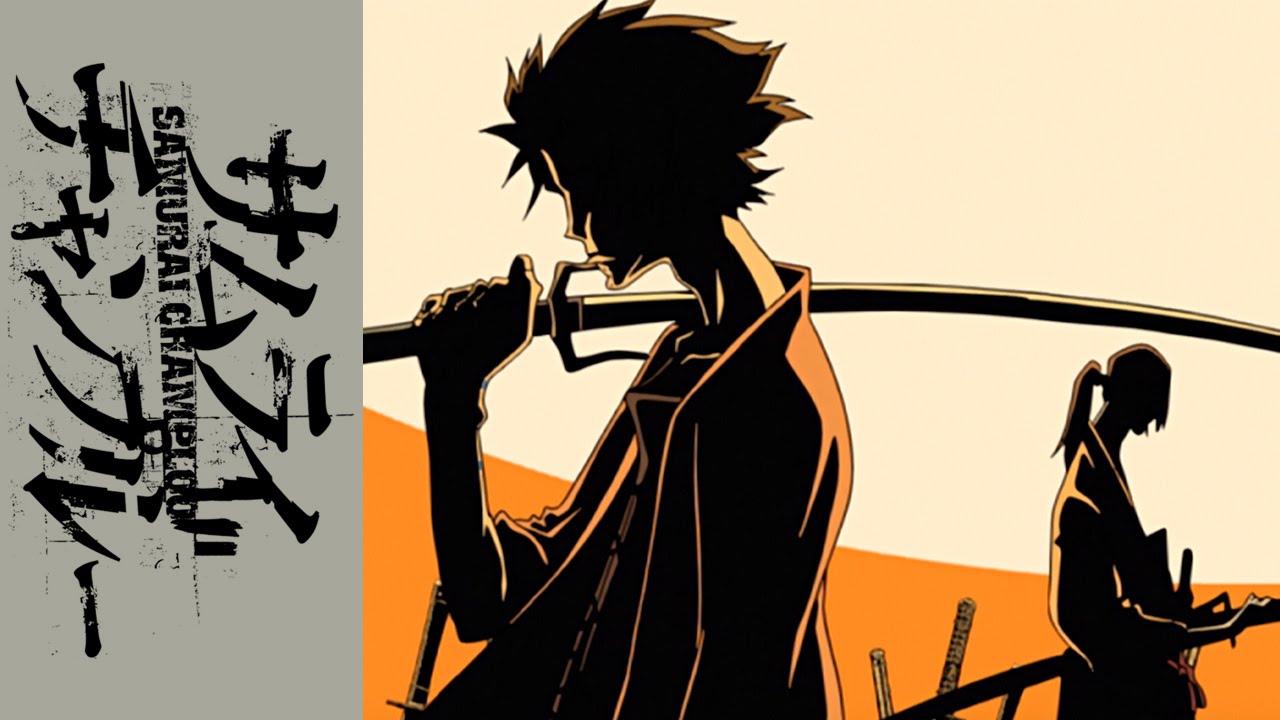 If Nikolas Draper-Ivey is the artist for the STATIC miniseries, it’ll be interesting to see if it’s done in a manga-style. I think that would be kind of cool.

And always with an eye towards HBO Max, if there’s an animated “Static” series in the works, this character design is pretty great.

DC, WarnerMedia. You can do this…

And have really enjoyed reading through the Milestone comics on here already. Hardware is a great character and story, and my favorite of the old series released on here so far.

Absolutely THRILLED about this!!!

This is wonderful news! I loved Milestone Comics.

So MILESTONE RETURNS: INFINITE EDITION #0 is out. 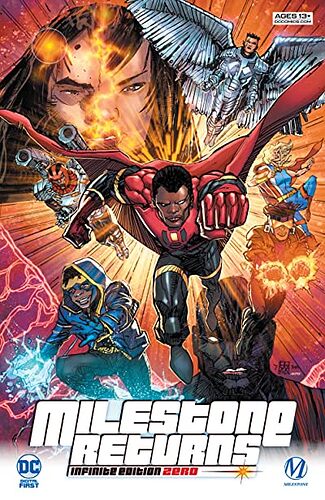 At long last - the return of the legendary Milestone Comics imprint has kicked into high gear! This jumping-on point one-shot features twenty-four all-new pages chronicling the events of the Big Bang - the police-brutality protest gone wrong that... 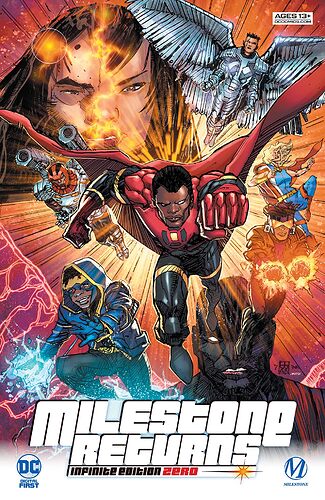 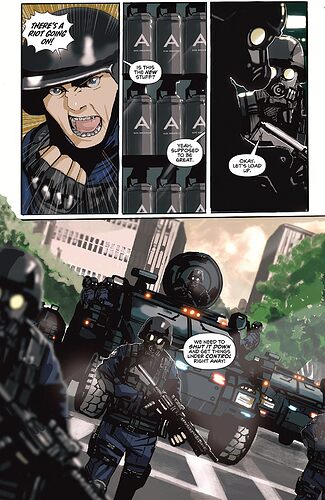 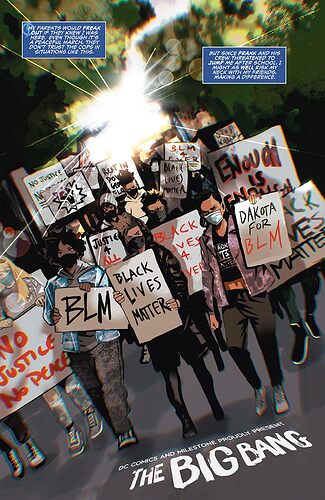 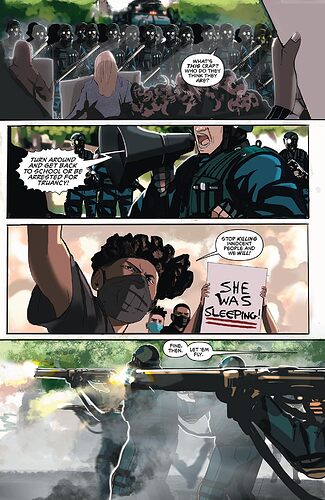 It was good. I liked it.

The big takeaways for me, the upcoming digital-first miniseries.

I was already onboard for STATIC. 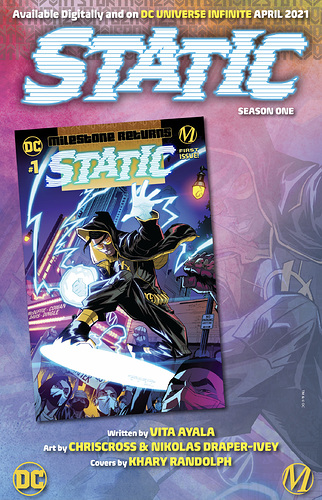 In this monthly miniseries (20 pages per issue), bullied nerd Virgil is gifted with incredible electromagnetic powers in the wake of the Big Bang. Now he finds himself caught between an over-militarized police response to Black kids getting special abilities and some of those kids who are using those powers in dangerous and destructive ways. But when the bullies who terrorized him before the Big Bang show up with powers of their own, can Static be the hero that Dakota needs?

Static launches Monday, April 12. Each 20-page issue will be available on participating digital platforms for $3.99.

ChrisCross and Nikolas Draper-Ivey on the art. I approve. [insert smiley face]

The ICON & ROCKET digital-first miniseries in the big surprise to me. 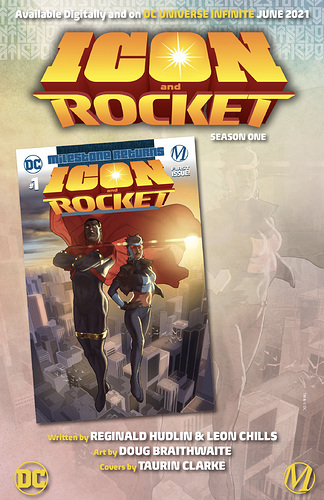 The return of Augustus Freeman and Raquel Ervin is also in the works, with a new series featuring Icon and Rocket.

What happens when superheroes actually make a difference? When Raquel Ervin broke into the home of a wealthy Black lawyer, she didn’t expect to learn that he was a nearly omnipotent alien, lost in despair of ever returning home—and he didn’t expect that she would inspire him to emerge from the shadows and become a force for change on the planet he’s trapped on. What starts out as a simple request to stop the drug trafficking in her neighborhood turns into a mission to eliminate the drug trade worldwide. However, this act of heroism has unexpected consequences, making the pair the two most wanted criminals in the world when actually stopping crime leads to the collapse of the global economy!

The debut issue of this six-issue monthly series (20 pages each) arrives June 21 for $3.99 per issue.

One of my favorite artists, Doug Braithwaite (from JUSTICE), is doing the art. Wow.

I’ve always wanted to like Icon, I just never really cared for Rocket (and that’s the sole thing that held me back), but with Doug Braithwaite on the art… they may have me now. 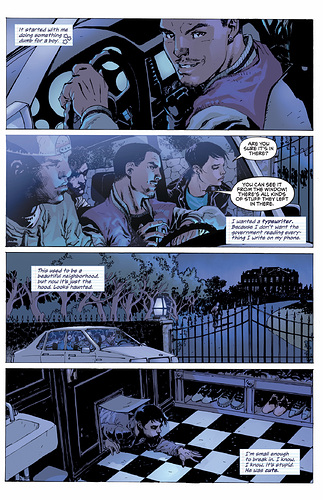 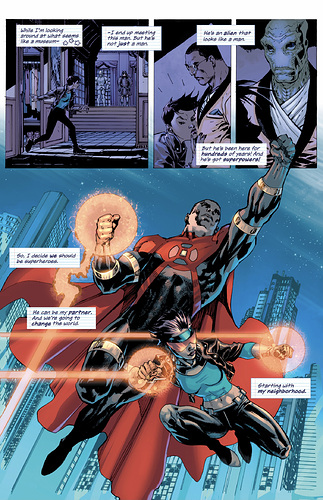 …it was like, “Okay, I can see myself reading this.”

Now with Doug Braithwaite. Yeah, I can see myself reading this.

Oh, and Denys Cowan and Bill Sienkiewicz are on the art for HARDWARE, so no surprise there. And written by Brandon Thomas.

The Icon news though, that’s the topper for me.

I think I may have a new favorite everything. (again… Ha!)